John Maitland Marshall was born on 24 August 1859 in Tavistock, Devon. 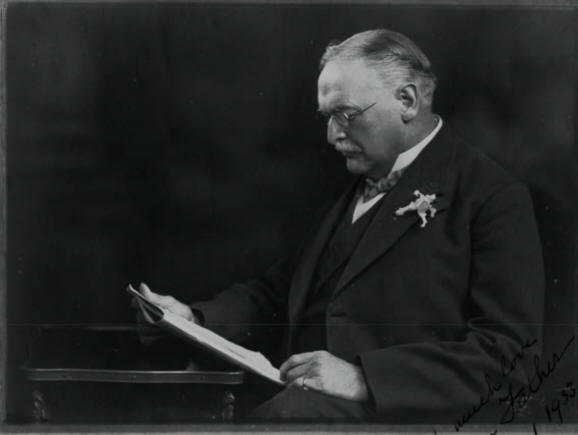 Though he sold the family firm, Marshal & Co., educational publishers, (see below) he maintained his interest in education and became Chairman of the Governors of both Dulwich College and Benenden School.  One of the houses at Benenden is named after John and is  the only one not named after a family who lived at Hemsted Manor. 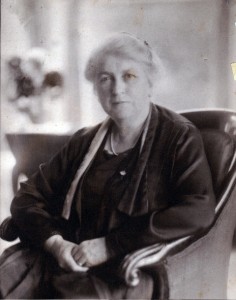 John and Kitty lived first at 10 Herne Hill and moved to The Grove, Dulwich Village after his father, John Marshall, died. John Maitland Marshall died on 24 June 1933 in Dulwich. 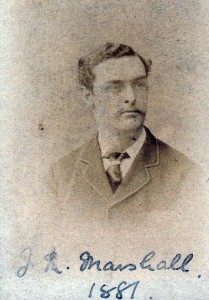 The story goes that he, as a child, used to deliver his father’s work by handcart. A spinster lady who saw that he was always avidly reading, befriended him and paid for his education. John married Anna Dennis on 18 June 1857 and moved to London. She was born in Tavistock on 24 February 1834 and died in 1889. He founded alms houses in Tavistock in her memory and John Maitland Marshall had gates erected. He married secondly Amelia Elinor Albery in 1881 and she died in about 1905. John lived in West Norwood, and became a publisher of educational books through his firm, Marshall & Co, with offices at 42 Paternoster Row (adjacent to St. Paul’s). He founded Memorial Cottages in Tavistock

The business was sold after his death, but continued until the premises were bombed during the Second World War and presumably all the firm’s records destroyed. There are no records of the firm at the Guildhall Library. It is said that he invented the ‘times table’ and a sample of the firm’s exercise book exists in the family. John died on 7 May 1910 at ‘The Oaks’, Gipsy Road, Norwood and his death certificate is below:

The firm was in existence in 1867 since a family diary for that year (Eliza Ebden, grandmother of William Sydenham’s) lists the firms which sold it, Simpkin, Marshall & Co including Hatchards & Co. So if the latter firm was the precursor of Marshall and Co, John Marshall must have been established in London by 1867.

John was a strict Baptist. His household has also been found on the 1901 census living with his wife Amelia at No. 226 Gipsy Road, Norwood:

John was an executor to the will of Eleanor Ann Thompson (Man) Thomas, as was Herbert Keith, James Matthew’s grandson. Below John’s probate record.

Notes on the name MAITLAND based on Bill Ebden’s. (These notes are still being sorted)

As noted above, John Maitland Marshall was the son of John Marshall (publisher) and grandson of John Marshall, (carpenter & cabinetmaker). It had been customary for the eldest son to be given the same name as his father, but by the time of John Maitland Marshall’s birth middle names had become normal, so was he called Maitland because his parents liked the name or did it have some family significance? What we do know is that his son who was killed at Gallipoli was called John Morrice Maitland Marshall and each of his three posthumous nephews had one of the M names as their second name, John Morrice (Jorrice) Cairns James Lord St Brides, William Maitland (Bill) Ebden and John Marshall Brooke – also Edward Ebden was given the Maitland name. The earliest recorded Marshall is David, Army Pensioner; Morrice comes from the Man family through Emma Catherine (Kittie) Man, John Maitland Marshall’s wife, the younger daughter of Morrice King Man who died in Tasmania when she was only one year old: but where does Maitland come from? There is a clue: John Marshall (publisher) had a younger sister – Ann Eliza Marshall, aunt of John Maitland, was married to John Pearce Trickey and they had a son whom they called Arthur Maitland Trickey, but unhappily he only survived about six months. This points to the name Maitland coming from a distaff family, ancestors of both John & Ann Marshall.

The 1841 census lists the following persons living in Tiverton [Devon] (the street is undecipherable):

David Marshall; Army Pensioner. The census indicates that he was NOT born in Devon;
Wife Mary – she was born in the same county ie Devon;
John Marshal, age 37 Carpenter;
John Marshall age 8.

And the 1851 census lists the following persons living in Westexe, Tiverton:

Unfortunately the 1841 census does not give relationships. Bill Ebden suggests however that David Marshall & Mary Unknown were probably John Marshall’s parents and she is a candidate for being a Maitland.

There is evidence of the marriage of a John Marshall, bachelor & Elizabeth Ponting, spinster on 18 June 1832 in Wellow, Somerset and the baptism of Elizabeth Ponting on 5 March 1809 , the daughter of Theophilus Ponting & Sophia Ponting (a cousin as well as wife?) in Kilmersdon, living nearby in Charlton, about seven miles from Bath. The only problem is that this makes John born in the sixth month of marriage, though not impossible! But if this is accepted it identifies Elizabeth and eliminates her from being Maitland.

Another possibility is Elizabeth, the mother of Anna Dennis, the much-loved wife of John Marshall (publisher), but she was not an ancestor of Arthur Maitland Trickey.

Richard Dennis married twice, his first wife called Rebecca (birth surname unknown, but possibly Glubb) was the mother of all Richard’s children and she died on 12 December 1840 in Tavistock. His second wife was Mary Collins. The Mary in the 1841 census was probably Richard’s mother. So Rebecca, Richard’s first wife, who died when Anna was only six, is a candidate for being Maitland, but not so strongly as she was not an ancestor of Arthur Maitland Trickey. Richard’s mother seems to be an unlikely candidate.

[Curiously on the 1841 census there was another John Marshall (carpenter) living with his wife Mary and a large family only a few doors away in Westexe. Possibly the two John Marshalls were in partnership? ]