Frances Man was born on 24 August 1757 in Croydon, Surrey, the third daughter of John and Mary (Balchen) Man, and was baptized on 5 September at St John the Baptist Church, Croydon (right). 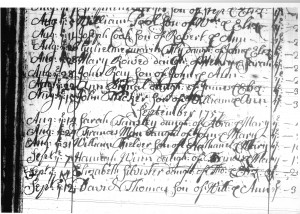 Frances left a will that was proved on 27 April 1842.  This has been transcribed and can be accessed HERE (<— PDF).  Surprisingly, her bequest goes to a Bertram Loadsman, who is a minor at the time the will is prepared, his mother is a widow.  Research by Ed Man in the IGI (International Genealogical Index) has revealed that Bertram and his sister Jane were both baptized on 23 January 1835 at St Mary, Reading, parents – Bertram and Matilda. The 1841 census record in Reading of Frances Man[n] indicates that there was a Bertram Loadsman, age 12, living with her (which would place his birth around 1829).  Since Bertram was baptized when he was six years old, it is not clear if sister Jane was a twin – probably not.

The marriage for Bertram’s parents on 29 Dec 1823 at St Mary Aldermanbury, London, was also found in the IGI.

The following information on the Loadsmans was supplied by Joy Power a descendant of Jane Loadsman.

Bertram Loadsman’s mother was Matilda Mason who was born circa 1805 – 1810 (based on the 1870 US census and her death record).  She married Bertram Loadsman on December 29 1823 at St. Mary’s Aldermanbury (London).  The marriage certificate states that Matilda was from ‘the parish of St. Lawrence in Reading in the County of Berkshire’.  It appears that Bertram was from the parish of St. Mary’s Aldermanbury.  Matilda died on December 16 1875 of cancer. She was a pauper living in an almshouse in Trenton, New Jersey.  She was buried in the ‘strangers ground’ in Mercer Cemetery, Trenton, NJ.

Jane Loadsman (daughter of Matilda Mason and Bertram Loadsman and brother of the Bertram mentioned in Frances Man’s will), was born circa 1833 in Newbury, Berkshire and baptized on January 23 in St. Mary’s Reading, Berkshire with her brother Bertram).  She married William Power between 1849 and 1852. Jane died on 19 December 1863 in Trenton, NJ and was buried in the ‘strangers ground’ in Mercer  Cemetery, Trenton, NJ.

Jane and William lived in Holborn (London).  Matilda Loadsman (mother of Jane and Bertram) sailed to the US with Jane, William and their 2 young children (William Jr. and Emily) between 1853 and 1855.

William and Jane had more children after they reached the US. William was a soldier in the Civil War from 1861-1865.

Why did Frances Man leave her money to Bertram Loadsman and not to any of her ‘Man’ nieces and nephews? Perhaps Matilda could no longer support all of her children after the death of her husband and Bertram (her son) was ‘given’ to Frances and in turn he became like a son to her and so became her heir.  Also, it has been claimed that Frances was raised by the Balchen family in London which may go some way to explain why she left her money outside the family.

Frances Man makes a very brief appearance in a letter written on 11 May 1784 by her cousin George Cumberland to his brother Richard:

On Sunday afternoon I called on Mary Balchen and found her very ill indeed with a feverish disorder and putrid Sore Throat and after sitting some time found she grew better, but I persuaded her at last to let Fanny Man [Frances Man] call on Johnsons – she [Mary Balchen] seemed as [s]he has always done of late, uncommunicative, cool and scarcely enquired after any body — and I suspect from all this that somebody is labouring hard to sever our intimacy – for she is entirely guided I now perceive. They now do not move at all, but why I cannot learn.