Henry Man was born in 1660 in Hambleden and was baptized on 26 March 1660 at St. Mary the Virgin, Hambleden. The second son of George and Jane (Saunders) Man, 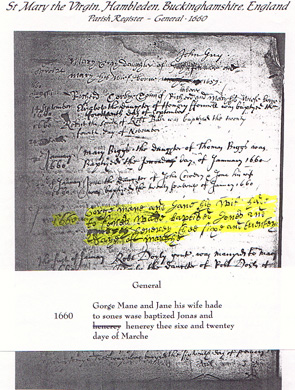 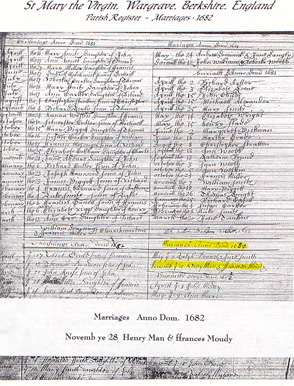 So far, no burial record has been found in Wargrave for either Henry or Frances leading to the conclusion that they had moved to another parish before their deaths. A search is in progress to locate their burials.

Frances Moody was born in 1659 in Wargrave, Berkshire, the eldest daughter of John and Frances (Moody) Moody, and was baptized on 28 October 1659 at St Mary the Virgin, Wargrave. 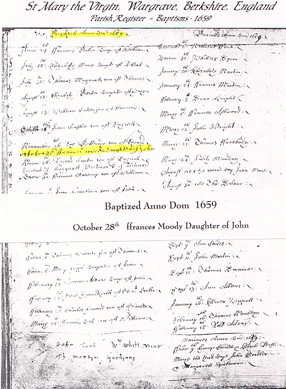 NOTE ONE:  The first names for the children, for the most part, are common names used at that time.  However, ‘Ellenore’ is not common and she was probably named after her mother’s sister.  ‘Jonas’ is also uncommon for that time, but Henry Man of Hambleden had a brother named Jonas, who died shortly after birth, and a grandfather named Jonas. Since a baptismal record has not been found for a Henry Man in Wargrave (nor any other Man earlier than the ones listed here), it is easy to conjecture that the Henry married at Wargrave was the Henry born in Hambleden (the parishes are adjacent though separated by the River Thames).

NOTE TWO:  The burial record for a Frances Man could have been for the mother or the daughter.  However, since it has been reasoned that mother Frances was living after 1729 [see Note Two on John Man (1685 – 1750) page], the burial for a Frances Man in 1710 would have to have been for the daughter.  In addition, since father Henry’s burial record has not been found in Wargrave, it is reasonable to assume that both Henry and wife Frances died in another parish.

Note: The names of these ten children can ALL be found in earlier generations of either the Man or Moody families. The Man family name of John probably came from the Moody side. The parishes of Hambleden and Wargrave, though in different shires (counties), lie adjacent to one another on either side of the River Thames.

THE MOODY FAMILY OF BERKSHIRE

(all events at Wargrave unless otherwise stated)