George Man was born in 1630/31 in Hambleden, Buckinghamshire, the second son of Jonas and Elizabeth (Costerd) Man, and was baptized on 2 February 1630/31 at St. Mary the Virgin, Hambleden. He married Jane Saunders on 27 September 1654 at St. Mary the Virgin, Hambleden. 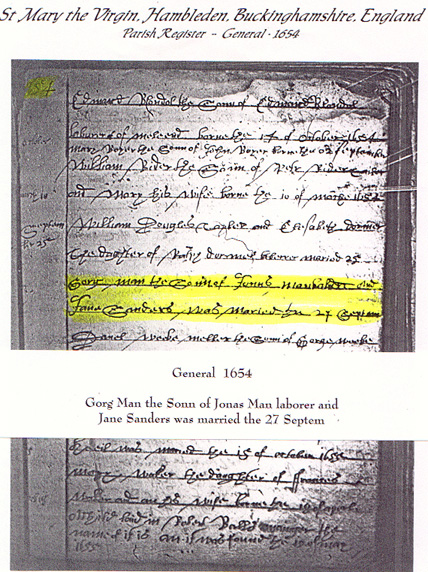 Jane Saunders was born in 1634 in Hambleden, the fifth daughter of Robert and Amy ( ? ) Saunders, and was baptized on 12 December 1634 at St Mary the Virgin. [Reference on George’s family: FHL Film # 1967097.] Note:- On the deaths of George and Jane in 1664, two of their children survived – Elizabeth, age 9, and Henry, age 4 – and apparently they lived into adulthood. It is not known who raised them – possibly their aunt, Elizabeth Man Ilbury, who married about 1650 and raised a family in Hambleden. However, Elizabeth Ilbury dies in 1668 so at that point we don’t know what happens to Elizabeth and Henry. Since Wargrave, Berkshire, is just across the River Thames from Hambleden, it is not difficult to conjecture that they were subsequently raised there.

Some researchers have suggested that Elizabeth married a man called Richard Draper and emigrated to Farnham Parish, Old Rappahannock County, Virginia Colony . This family can be further traced here.] As we have noted on George’s father’s page, George’s mother Elizabeth (Costerd) Man’s burial record indicated that she died a few days after her son George and a few days before her daughter in law Jane (Saunders) Man. We have also noted that given the Great Plague of London struck around this time and three members of the same family all died within days of each other would suggest that Elizabeth, George, and Jane died of the plague. Their living in the country though might suggest otherwise, but even country folk were victims. Below the burial record for George and Jane (Saunders) Man. GEORGE MAN AS ‘LABOURER’
Why on his marriage record and his burial record ten years later is George given the label ‘labourer’?  Most records of this type, especially in small rural parishes such as Hambleden,  do not note the occupation of the person and yet here we have George’s noted twice. If he were a ‘labourer’ in the sense of one who just toiled – a common enough occupation in the seventeenth century –  it would be unlikely to have been noted as such let alone twice.

There is one definition of the term ‘labourer’ however that may fit and that is as follows from the OED:

Labourer in trust n. (also labourer of trust) an official, ranking immediately below a clerk of the works (Clerk of the Works), responsible for overseeing work on a major building project, a state building, etc.

George’s great grandson John Man was an architect/builder so this may have been a family occupation.

Since Jane Saunders’ family was of the gentry, then her marriage to a ‘labourer’ in the sense defined above is more likely. We will never know of course. See also the end of the Saunders Family page as to how / why we claim that ‘our’ George married Jane Saunders the granddaughter of Sir John Saunders and Susannah D’Oyley as it may strain one’s credulity and understandably so.