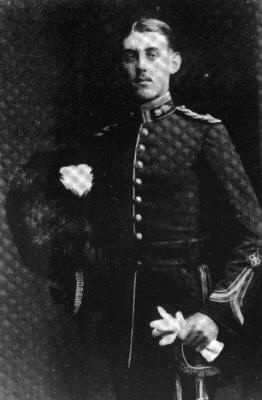 Carol Edward Vere Awdry was born on 11 June 1894 at Broad Hinton Vicarage, Wiltshire, the son of Vere and Mary Louisa (Man) Awdry. He was baptized on 15 July 1894.

He died on 27 August 1914 in action at Oise, France (killed in action), and was buried on 28 August at Etreux British Cemetery, Aisne, France.

There is a memorial in Etreux, that marks the grave of 2nd Lt. Carol Edward Vere Awdry of 2nd Royal Munster Fusiliers where he is listed as the son of the Rev Vere Awdry and Mary Louisa Awdry (nee Man) of Box, Wiltshire, England. 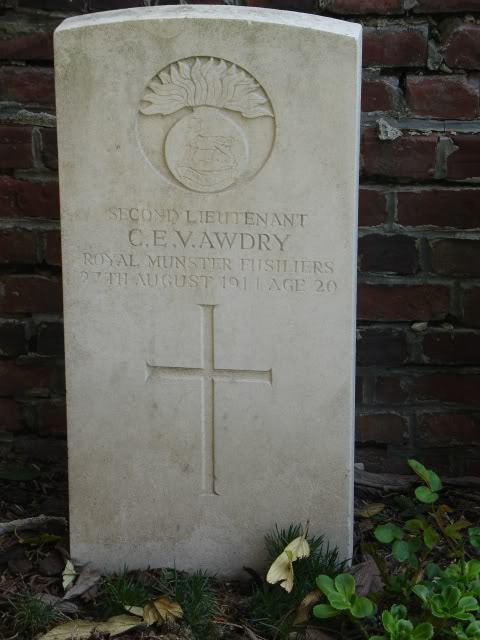 His father wrote this about his son’s death: “We are inclined perhaps to ask why the splendid young fellow in the prime of life and with all his future – as we call it – before him, should be so suddenly cut off while older and possibly feebler ones are left. “The Lord hath need of him”. That is the answer. He needed him in particular for some good purpose of His own which we here cannot and shall not know in this world. Nothing is done by God be mere chance […] We have at least the satisfaction and great comfort of knowing that our dear lad suffered no pain … death has come, but a death to be proud of, not that probably others have not died equally brave and noble deaths – we know many have – but he was our boy, our own lad. He has lived his whole life among us at Ampfield, and we can be proud of that Ampfield lad, who has proved himself trustworthy and faithful unto death”. (From “The Story of St Mark’s Ampfield” pp. 38-39).

In St. Mark’s Church, Ampfield, two memorial windows have been put up in memory of 2nd Lieutenant Awdry and officers, NCOs and men of the Munsters who fell on 27 August 1914. 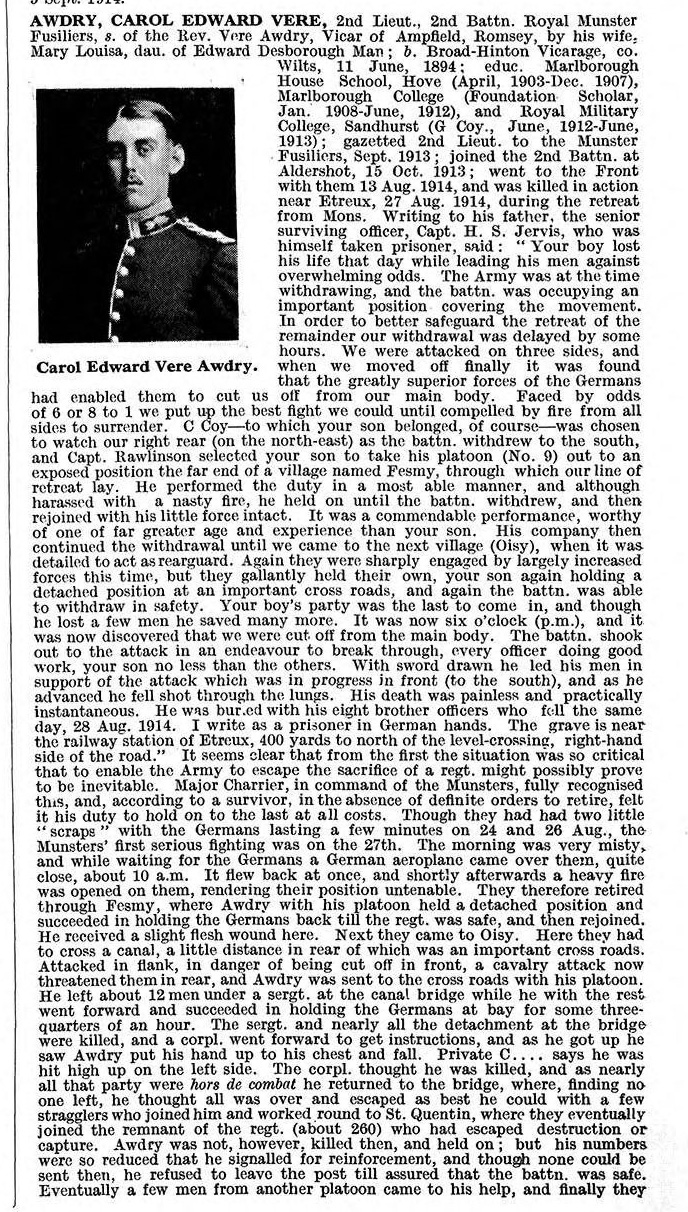 Awdry was born at Broad Hinton Vicarage, Swindon, Wilts, on the 11th June, 1894, was the sen of the Rev. Vere Awdry, Vicar (since 1895) of Ampfield , Hants, and Mary Louisa (nee Man), his second wife. He was also related to the late Major-General Webber Desborough Harris, who commanded Second Lieutenant Awdry’s battalion when it was the 104th Bengal Fusiliers.

Second Lieutenant Awdry was educated at Marlborough House, Hove (Mrs. Wolsey White and Rev. T. Bullick), from 1903 to 1907; he was then a Foundation Scholar at Marlborough College fiom 1908 to 1912. [The 1911 census shows Carol on the first line below]

In June 1912 he entered the R.M.C., Sandhurst, passing ou’. in June, 1913. He was gazetted to the Minister Fusilie s in September and joined the 2nd Battalion at Aldershot in October. 1913. With it he left for the front on the 13th August, 1914. He was killed in action on the 27th August, and Captain Jervis, the senior surviving officer of the battalion, wrote the following account to Second Lieutenant Awdry’s father, when he himself was a prisoner in the hands of the Germans:

“In order to better safeguard the withdrawal of part of our Army, the 2nd Royal Mimster Fusiliers were occupying an important position and were attacked on three sides, and when finally ordered to withdraw found themselves cut off from the main body. Faced by odds of six or eight to one they put up the best fight they could, till the fire from all sides compelled a surrender. Second Lieutenant Awdry’s Company was chosen to watch the right rear, and that Officer was selected to take his platoon to an exposed position at the far end of a village named Fesmy, through which the line of retreat lay. He performed this duty in a most able manner, and holding on in face of a heavy fire, rejoined the main body with his little force intact. It was a commendable performance, worthy of one of far greater age and experience. Later on C Company (Second Lieutenant Awdry’s) was detailed to act as rearguard, and again through their gallantry, the battalion was able to safely withdraw, Second Lieutenant Awdry’s party being the last to come in. It was then about 0 p.m., and it was found that the battalion was cut off from the main body. The battalion extended in an endeavour to break through, every officer doing good work. Second Lieutenant Awdry, with drawn sword, led his men in support of the attack that was in progress, and fell, shot through the lungs, as he advanced. His death was painless and practically instantaneous.”

His brother Officers and all his Company expressed their deepest sympathy. By Second Lieutenant Awdry’s death they lost a cheery companion, an honourable gentleman, and an Officer of distinct promise. He was buried with eight of his brother Officers who fell the same day, in a grave near the railway station of Etreux, a service being read over the grave at the time.

One of Second Lieutenant Awdry’s platoon, who saw him actually fall, stated that ” at one time during the last stand this platoon of 64 men all told, held 500 Germans back for full three-quarters of an hour. Only 17 of them got away.” He states that Second Lieutenant Awdry was kneeling behind a mound with his revolver levelled and actually giving the command “Open fire on the Cavalry.” when he was shot through the chest.

On a personal note,  this web editor (2010) was educated at Marlborough House School in Hawkhurst, Kent. The school was organized around four ‘houses’ or ‘teams’: Awdry, Dunbar, Egan and Hawkins. So named after the first four boys killed in World War One. Thus Carol Awdry’s name was memoralized by the school. The web editor was unaware of his family connection to Awdry (the team and the person) until 2009.