John Saunders and his two wives: 1634. A brass rubbing.

Three generations of this family starting with Generation One down to Generation Four where Jane Saunders marries George Man have been recorded. Those in bold are direct ancestors of Jane Saunders.

The children of Richard and Dorothy are of Generation One and are:

The children of John and Susanna are of Generation Three and are:

♦ There was another slightly older Mary Saunders (baptised 11 Jul 1595 at Hambleden) who was the cousin of this Mary’s father John. The older Mary’s father was John Saunders (not shown above). This John (to be absolutely clear) was the brother of Richard Saunders (1555 – 1613/14). The older Mary married Susanna D’Oyley’s brother Timothy D’Oyley on 4th February 1610 at St Mary’s Hambleden. The Saunders’ family estate of Parmoor past to Timothy D’Oyley via his wife Mary.

*The gap in time between the records of Ann and Dorothy’s baptisms was of some concern. But, whereas for the first four baptisms the record reads either “s. of . .” or “d. of John”, Dorothy’s reads “d. of John and Susanna”. So that seemed to resolve that concern. However, when the brass rubbing shown on this page was found, it indicated that John had two wives. Though confirming records have not been found, it would seem reasonable to account for the gap in baptisms with the conclusion that Susanna (Doyley) Saunders died and John remarried another Susanna sometime later and Dorothy was a daughter of the second marriage. 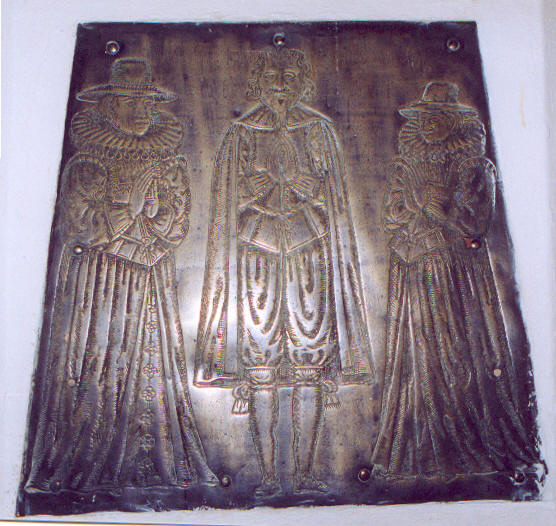 John Saunders and his two wives. A photograph taken by Ed Man.

Robert Saunders was baptized on 9 March 1605/6 at St Mary the Virgin, Hambleden, Buckinghamshire, married about 1623 to an Amy Unknown (first name obtained from baptismal records of children). He was buried on 2 May 1679 at St Mary, Hambleden. Amy was buried on 10 April 1671 at St Mary.

The children of Robert and Amy are of Generation FOUR and are:

Above is a brass rubbing of John Saunders and his two wives that is in the Church of St Mary the Virgin, Hambleden, Buckinghamshire. His granddaughter, Jane Saunders, married George Man on 24 September 1654 at St Mary. The rubbing is the earliest known recorded image of a family ancestor.The notes below are by Ed Man. 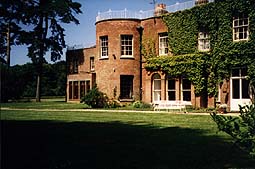 The family lived at the Manor of Parmoor (left), Hambleden, Buckinghamshire which came into possession of it in the sixteenth century. In 1603 Richard Sanders [2] conveyed it to Timothy Doyley [3] and heirs. Timothy Doyley is said to have married Mary the daughter and sole heir of John Sanders of Hambleden about this time. [4] (Bayley, ‘Account of House of D’Oyly’ p. 68.) Later claims to this manor made by John Saunders [5] were finally settled in 1631 in favour of Timothy Doyley. Robert, [6] son and heir of John Saunders, was associated with his father in this claim. (Calendar of Feet of Fines, Bucks, Trinity 13 James I Feet of Fines, Bucks, Michaelmas 22 James I.Ibid., Michaelmas 7 Charles I.).

Parmoor remained in Robert Doyley’s family, passing from father to son in the direct line until the death, unmarried, of his great-grandson John Doyley. John was receiver-general of light duties, and dying intestate in Seething Lane, London, in 1800, was buried in the Doyley vault in Hambleden Church. He survived all the sons of his uncle Robert Doyley, on whom his father Thomas Doyley has settled the estate in remainder with further remainder to his own daughters. (Bayley, op.cit., 71,72 &; Gentleman’s Magazine, lxx, 1116.)

The claim that the Jane Saunders of this Saunders family married ‘our’ George Man is based solely on the following deductive reasoning. In the parish of Hambleden at the time that Jane married George there was only one Jane Saunders who was born at Hambleden of marriageable age and that Jane was the granddaughter of John Saunders and Susannah D’Oyley. George could have married a Jane Saunders who had been born in some other nearby parish and had subsequently moved to Hambleden, but a search of all such close-by parish records has failed to turn up a suitable Jane Saunders and we are left with just this one Jane The only detraction to this argument is that George Man is described as a ‘labourer’ on the marriage record. For a discussion as to why this may not entirely overturn our argument please see the end of George’s page.