Vera’s first husband, Robert Bruce, was a doctor (as was she) who was resident at 12 Rosebery Terrace, Glasgow at the time of his marriage to Vera. Robert’s father was Robert Wilson Bruce (who was also a doctor) and his mother was Madeline Redpath. The witness to the marriage were William Redpath Bruce (possibly Robert’s brother) and Violet Ida Reis, Vera’s sister.

It is believed that a brother of Robert’s – William Redpath Bruce – founded a property company called ‘Redpath Bruce’ which flourishes today. The company’s website is HERE.

One of Robert’s brothers Charles James Bruce was killed during WWI: 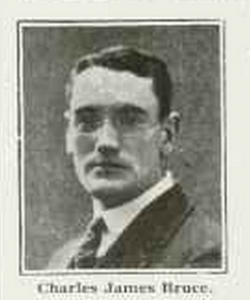 BRUCE, CHARLES JAMES. 2nd Lieut., Army Cyclist Corps, 3rd .s. of Robert Wilson Bruce, of 5. Rosebery Terrace, Glasgow, Surgeon, by his wife, Madeline, dau. of William Redpath ; b. Glasgow. 20 March, 1887 : educ. Billhead High School there; was an Inspector of the Scottish Widows’ Fund Life Assurance Society, being for four years a member of the Glasgow Highlanders (T.F.); volunteered for foreign service, and rejoined on the outbreak of war in Aug. 1914 ; served with the Expeditionary Force in France and Flanders from the following Nov. ; was wounded at Festubert in May, and invalided home; obtained a commission in the Army Cyclist Corps 10 Aug. 1915 ; served with the Egyptian Expeditionary Force in Egypt and Palestine from May, 1916 ; took part in the Battles of Romani and Gaza, and died at Cairo 20 May, 1917, from wounds received through bombs being dropped on a Field hospital where he was stationed, suffering from an attack of dysentery. Buried in Old Cairo Cemetery. His former Commanding Officer wrote : “ I feel Bruce’s death very much, as he was such a fine fellow ; so cheery and one you could entirely depeud on to do the very best, no matter how trying the circumstances. He did so well also during the fighting.” Unm.

Below ‘The Lancet’ of July 28 1906 showing Vera listed eight lines from the bottom of the page. Her birthplace is given as Ireland which contradicts what we know.