Charles Lionel Reis was born on 7 July 1849, at 5 Chatsworth Street, Liverpool, the eldest son of Jonas and Marian (Samuel) Reis. He married his first cousin Elizabeth Woodburn on 3 January 1872 at Liverpool Old Hebrew Congregation, Liverpool. Elizabeth was born in 1853 in Liverpool and she died on 21 April 1915 while at 8 Lynedoch Place, Glasgow. She was the daughter of Hannah (Samuel) and Samuel Woodburn. Hannah was the sister of Marian Samuel (Charles’s mother).

Between the birth of Percy Harcourt in 1875 and Violet Ida in 1879 there was the birth of a son which was announced in the Jewish Chronicle as follows: ‘Birth 29.4.1878 at 1 Ailesbury Road Merrion Co. Dublin a son, who survived his birth a few hours.’

He gives as his address 15 Park Circus, Glasgow on his 2nd marriage certificate and it appears also on his death certificate. On the probate of Philip Schoeppler (second husband of CLR’s mother Marian Samuel) it states that Charles is an executor and gives his address as 49 Jamaica Street, Glasgow which maybe where his jewelry shop was located. Some articles appeared in the Times about CLR’s shop in Glasgow. 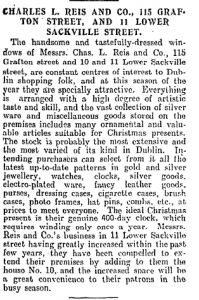 Since this page was originally placed on the web various pieces of information have been emailed by people who have found this web page, for instance one message reads in part: “I have been researching a piece of jewelry that I have that is in it’s original box. The writing on the inside of the box says C. L. Reis & Co. 24 New Street, Birmingham. ”

Another email says: “I notice that in the history of Charles L. Reis, his address was given as 49 Jamaica Street, which was also thought to be that of his shop. I have recently acquired a pewter finished glass hip flask which has the following stamped on the base :- C. L. Reis & co. 284 Jamaica St. Glasgow. ”

THE CASE OF FRANCIS HYNES 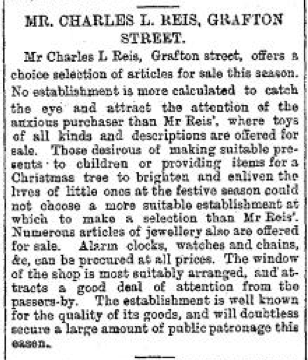 In the early 1880’s a trial for murder took place in Dublin. The accused was Francis Hynes and he was found guilty and hanged. A major political storm followed because of allegations of jury misconduct immediately prior to the sentencing.

The main complaint was leveled against one of the jurors, Charles Reis, whose behavior was said to have jeopardized the proper conduct of the case. There are two sources for the case of Hynes and the misconduct of the jurors. The first comes from articles taken from the London Times and which can be read HERE in PDF (117 pages) and the second from a House of Commons inquiry held in 1882 which describes in detail how Charles behaved. This can be read HERE in PDF (52 pages). Although this case is now forgotten it almost brought Gladstone’s government down and a major impetus towards ending British rule in the south of Ireland.

THE EASTER RISING OF 1916
Reis’s shop on Lower Sackville Street in Dublin was below the Irish School of Wireless and on the 2nd day of the 1916 Easter Rising, volunteers from the General Post Office took over the wireless school above Reis and made a morse code message of the proclamation of the Irish Republic. Within days Reis’s shop and all properties about were destroyed in shell blasts and fire. Also, during the uprising, Reis’s warehouse was set on fire, burnt, and collapsed. For details, see the original web site here.

Below CLR’s shop in Glasgow which is now a Pizza Hut. 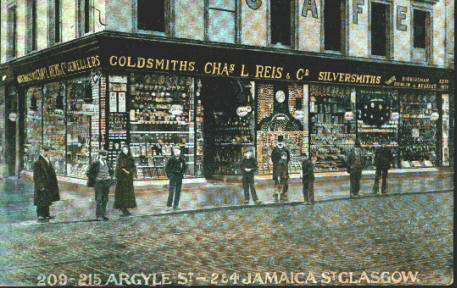 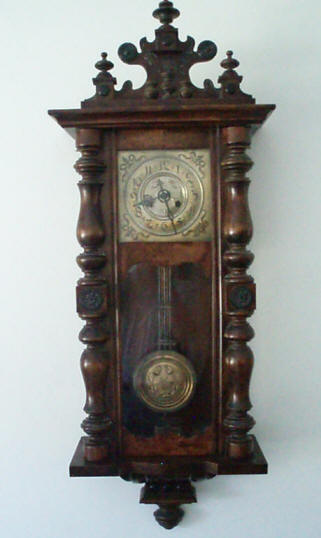 Right a clock in which there is a metal identification tag with the name “Chas L. Reis & Co – Glasgow”. This does not refer to the manufacturer of the clock as CLR did not make clocks but only to the fact that CLR must have been the seller.

Below is a silver tea kettle on a stand that holds a burner manufactured by Charles L. Reis in 1860. This item  is held by the Victorian and Albert Museum in London. 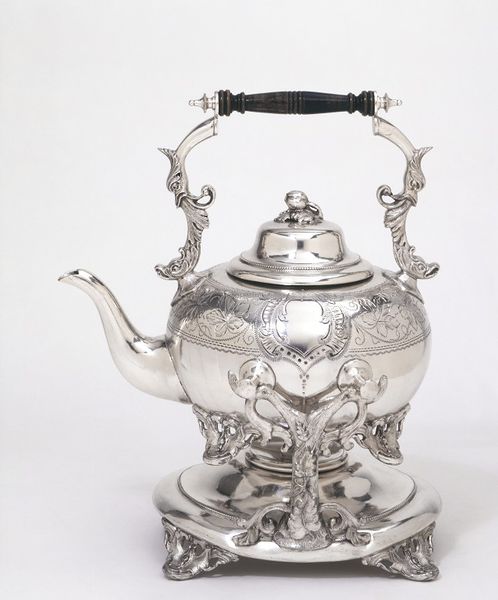 The photographs below were taken in 2005 and show Charles’s house at 15 Park Circus, Glasgow. The house is the second one from the left with a black door

The clock shown here is a typical Vienna 2 weight design and measures 49 inches tall and approximately 18 inches wide. It strikes on the hour and on the half on a coil gong. It has an exceptionally nice porcelain dial with a seconds bit. The clock movement also has maintaining power, which means the escapement is kept under power so it won’t stop or lose time during the weekly wind up. The ivory Reis label is rare on a clock. These Reis clocks were imported into the United Staes and then labeled under the Reis name. It is probably dated around the late 1800’s.

Below Lionel’s obit from the Aberdeen Journal:

Mr. Charles L. Reis.
A well-known Glasgow business man, Mr. Charles Lionel Reis, died at his residence, 15 Park Circus, on Tuesday night. Mr. Reis, who was a cousin of the late Lord Swaythling, was born at Liverpool. He was educated at the High School there and also in Paris and Mayenne. In 1869 he entered his father’s business in Liverpool that of a banker and bullion merchant, but three years later, at a remarkably early age, began business on his own account in London as a jeweller and fancy goods merchant. The business spread rapidly, and branches were opened in various parts of the country. Mr. Reis was a proficient linguist, and was prominent in Freemason circles.

The death occurred on Tuesday at 15, Park Circus, Glasgow, of Mr. Charles Lionel Reis, who for many years carried on business as jeweller and silversmith at the corner of Argyle and Jamaica Street. Mr. Reis, who was born in Liverpool, was educated at the High School there, and also at Paris and Mayence. He entered his father’s banking business in Liverpool in 1869, and when still a young man he started business on his own behalf as a jeweller and fancy goods merchant in London. Later he extended his business to Brighton, Portsmouth, Dublin, Cork, Belfast, Birmingham, Glasgow and Paris. He occupied the premises at the corner of Argyle Street and Jamaica Street, Glasgow, for a period of 45 years.