Spencer Mortimer Reis was born in 1902, probably in Alexandria, Egypt, the son of Arthur Montagu and Fanny (Cruwys) Reis. He married Gertrude Mary Boot on 14 October 1933 at the parish church of Ashford in Derbyshire.

Mary was born in 1906, the daughter of Charles Boot, whose father Henry founded the civil engineering company now known as Henry Boot Group. Spencer died on 30 May 1983.

Notes: On the marriage certificate Gertrude Mary Boot gives Thornbridge Hall Derby as her address. He father Charles Boot and his father Henry were civil engineers of some distinction.  Searches of the internet reveal the following about Henry and Charles Boot as wells as Thornbridge Hall. (see also below ‘Some Announcements from The Times’).

Charles Boot of Sheffield, England was the creator and builder of Pinewood Studios on the estate of Heatherden Hall at Iver Heath in the parish of Iver in Buckinghamshire, England.

Basic biography: In 1886 and age 35, Henry Boot commenced a one-man business as a builder with one handcart and later one horsedrawn cart. By 1914 Henry Boot had 20 horses and carts and 6 mechanically propelled lorries (trucks} and the company itself had developed into a business of “Joiners, Buiders, Plumbers, Painters and General Contractors” operating from a building on Moore Street in Sheffield, England.

1914 to 1918
During World War I (1914-1918), the Henry Boot company built a British Army camp at Catterick in Yorkshire; RAF Manston Aerodrome near Ramsgate; the Calshot Seaplane Base at Calshot in Hampshire; Tees Naval Base; a U.S. Army Rest Camp and hospital at Southampton and Chepstow Military Hospital. The company also constructed over one thousand military buildings and over 50 miles of roads and sewers.

1919-1931
Following World War I the Henry Boot company established an office in Paris, France to administer French government contracts for the reconstruction of war-ravaged towns and villages. In 1920 Henry Boot’s business became a public company with operations in England, France, Spain, and Greece undertaking the construction of harbours, underground railways, waterworks, and drainage systems throughout Europe. In 1927 the company was awarded one of the biggest contracts of the time in Athens, Greece involving extensive land reclamation and protection, irrigation works and the construction of roads and bridges. The contract was completed in 1952. (Work was suspended during World War II). Prior to World War II Henry Boot built in excess of 80,000 houses in the United Kingdom.

Death of Henry Boot
In 1931 Henry Boot died and his son Charles Boot took control of the company where he had worked with his father. In 1932 the company moved from Moore Street to its present head office at Banner Cross Hall, a “distinguished listed building” dating from 1821, which is also in Sheffield.

Pinewood Film Studios
In 1934 Charles Boot embarked upon the design and construction of what would become Pinewood Film Studios located among the pine trees of the 100 acres (0.4 km) estate of Heatherden Hall at Iver Heath in Buckinghamshire, England. Charles Boot based his designs upon what were at the time the latest ideas being employed by other film studios in the production of movies at Hollywood, California, USA. Charles Boot managed to complete the work in twelve months. In the years that followed the Henry Boot company also undertook further work on both the Pinewood Film Studios and the Denham Film Studios, both of which had by then become a part of the J. Arthur Rank Organisation. 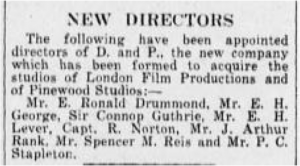 Today
The Henry Boot Company that began as a one man operation is now listed on the London Stock Exchange as a worldwide group of companies whose activities include property development, land management, and plant hire.

On Thornbridge Hall: A short distance away from Ashford is Thornbridge Hall, a Georgian T shaped house, extensively altered in 1871 and several times again during the following 50 years. In private hands till the mid 20th century, mostly under the ownership of Charles Boot, the founder of the Sheffield based contracting company, it became a teacher training college in 1940’s, then a multi purpose educational centre , a conference centre, and is now privately owned and still used occasionally for conferences and weddings. It contains woodwork from Derwent Hall and Church. The garden contains large amounts of statuary acquired by Charles Boot. It is a grade 11 listed building.

See also this from the BBC:  Follow this link for details on Henry Boot’s company and the link HERE that has a ‘profile of the Henry Boot company.

All these appointments reflect the recently announced deal whereby British & Dominions becomes partner in Pinewood and undertakes the management of the studio, the  B & D representatives on the board being  Messrs. Norton, Crammond, Wilcox and Cockburn. 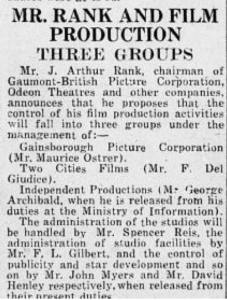