The Bennet family appears here on the Man and Other Families website as a result of a series of marriages thus: in 1895 Annie Bennet married Alexander Cran. In 1921 their daughter Winifred Cran married Gordon Reis. In 1947 their daughter Allwynne Reis married Frank Otto Stoe Man.

Annie was born on 21 March 1872 the daughter of James Bennet and Barbara Morrison. Her siblings include:

The following newspaper extracts are taken from a web site called ‘Glass Remembered’.

On Monday afternoon a deputation of members of the School Board and Parish Council waited upon Mr and Mrs James Bennet, Parkhall and in the name of their friends and the parishioners generally, presented them with a handsome walnut sideboard, a sofa and two easy chairs, on the occasion of their departure from the parish to reside at Aberchirder.

Rev. W.G. Guthrie, The Manse, in making the presentation, spoke of the esteem with which Mr and Mrs Bennet were regarded and of the large amount of public service which Mr Bennet had rendered during his 44 years’ tenancy of the farm of Parkhall. He had occupied every public office which it was possible for him to hold, having been a member of the School Board since 1889, of the Parish Council since its inception, and previously of the old Parochial Board, a Justice of the Peace, and an elder of the Kirk. In all these offices, as well as in his more private relations, Mr Bennet had gained and kept the complete confidence and respect of the community and in all his good works he had been nobly assisted by his partner in life.

Other members of the deputation also bore testimony to Mr Bennet’s straightforwardness in business and to Mrs Bennet’s hospitality and kindness of heart.

Replying on behalf of his wife and himself, Mr Bennet thanked the deputation most warmly and through them all their friends in the district who had so kindly presented them with such valuable and useful gifts and said that wherever they went they would never find better neighbours than they had the good fortune to have in the parish of Glass.

The company was afterwards entertained by Mr and Mrs Bennet and in the course of the evening had much pleasure in viewing a number of valuable gifts recently bestowed by the King and Queen and Queen Alexandra on Nurse Mary B. Bennet, of His Majesty’s Navy, in recognition of the splendid service she has rendered during the war. Included among these was the Royal Red Cross with which Miss Bennet was decorated by the King at a recent audience at Buckingham Palace.

The gifts presented to Mr and Mrs Bennet were supplied by Mr Anton, cabinetmaker, Duke Street, Huntly. The sideboard bears a plate with the following inscription:- “A parting gift to Mr and Mrs James Bennet, Parkhall, from their friends in Glass – 28th May 1915”.

11 March 1921 Death of Mrs Jas Bennet(at Aberchirder) late of Parkhall, Glass.  Survived by son at Parkhall and another who is manager of the Iowa Rending Co. Sioux City.

Miss Mary Bennet, daughter of Mr Jas. Bennet, Parkhall, Glass is to be decorated with the Royal Red Cross. Nurse Bennet is on one of the hospital ships at sea. She was one of the nurses in the Rohilla, which was wrecked off Whitby, and shortly before that experience she nursed Prince Albert till he was able to be landed at Aberdeen for his operation. In recognition of this service Miss Bennet received a photograph of the Prince in a silver frame, and also a letter of thanks. All her friends in Glass are very pleased to hear of the honour which is to be conferred on her, and offer heartiest congratulations upon it. [Below the original photograph now in the possession of David Man]. 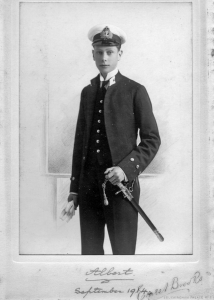 The King has been graciously pleased to confer the decoration of the Royal Red Cross on Miss Mary Barbara Bennet, Sister in Queen Alexandra’s Royal Naval Nursing Service. 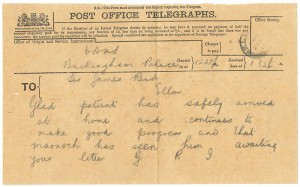 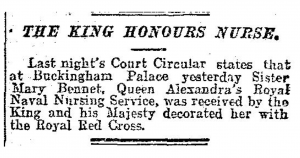 Sister Mary B. Bennet, who has been decorated by the King at Buckingham Palace with the Royal Red Cross, won the honour on the occasion of the wreck of the hospital ship Rohilla off Whitby in November.

Only five women were on board the Rohilla at the time, four nurses and a stewardess. When they were taken to shore they worked valiantly with Sister Mary in restoring the exhausted and the apparently drowned who reached the shore.

Sister Mary, who is quite a young nurse, having only entered the Service in 1910, is now serving on the Garth Castle.

The Royal Red Cross was established by King Edward for “conspicuous gallantry” in nursing the sick and wounded in the army and navy. [The original article is below] 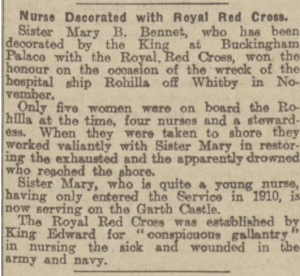 The Royal National Lifeboat Institution has received a substantial donation from the doctors and nurses at present attached to the Hospital Ship No. 2 several of whom were on the Rohilla at the time she went ashore on the rocks off the Yorkshire coast on October 20 of last year. It was sent as an acknowledgment of the bravery and kindness exhibited upon that occasion by the crews of the Tynemouth and Whitby lifeboats. It may be remembered that Sister Mary Barbara Bennett, who in conjunction with three other nursing sisters and a stewardess, was amongst the rescued on this occasion, was later awarded the Royal Red Cross by the King in acknowledgment of the distinguished services rendered by her to those who were suffering from injuries or immersion both at the time of the disaster and after. – “The Nursing Mirror” 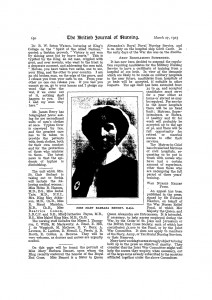 Annie Bennet had a younger brother James born on 28 Nov 1881 in Aberdeenshire, Scotland. He emigrated to the United States.

He is mentioned in the Improvement Bulletin, Volume 34 , as follows: — SIOUX CITY: Iowa Rendering Co. has begun the erection of a new plant. The main building will be 28×56, 3 stories and basement. In addition to the main building there will be a boiler and engine room and a storage house 26×50. J. A. Bennett is manager. 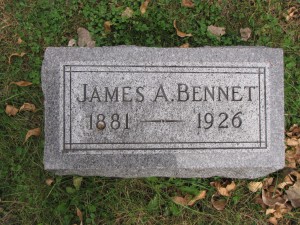 James and Leonora had two daughters: