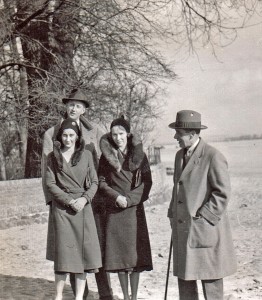 On the right is Trevor Matthews, next Eleanor Man and Joyce Matthews. The man standing behind has not been identified. Hamburg 1931

John’s uncle was Eric Dalrymple Gairdner and his grandfather William Tennant Gairdner (1873-1928) and who is pictured right.

The obituary of Eric Dalrymple Gairdner is below:

We regret to announce the death at Ayr, on October 20th, after a brief illness, of Dr. ERIc DALRYMPLE GAIRDNER, at the age of 55. Dr. Gairdner, who was a son of the famous Glasgow professor, Sir William Tennant Gairdner, K.C.B., M.D., F.R.S., was educated at Rossall School and at the Universities of Glasgow, Edinburgh, and St. Andrews, and graduated M.B., Ch.B.Glas. in 1902. He served as resident physician and resident surgeon at the Glasgow Royal Infirmary in 1902-3. In 1905 he took up practice in Ayr, and in 1907 was appointed surgeon to the Ayr County Hospital, which post he held until 1919, when he became Deputy Commissioner
of Medical Services under the Ministry of Pensions in Glasgow. He held the rank of major in the R.A.M.C.(T.), and during the war was medical officer attached to the 1/5th Royal Scots Fusiliers. He distinguished himself greatly, and was several times mentioned in dispatches, while in 1916 he was awarded the D.S.O., and a year later received a bar to this order. The French Government also conferred upon him the Croix de Guerre. He was several times wounded, and these war injuries undoubtedly shortened his life. After the war he returned to Ayr, and some eight years ago was appointed medical officer for Scotland of the London Midland and Scottish
Railway Company.

The obituary of Douglas Monatgu Temple Gairdner can be read below:

D M T GAIRDNER MA, DM, FRCP Douglas Gairdner (often known as “DG”) was an outstanding figure in the development of British paediatrics after the second world war and brought almost boundless energy and enthusiasm into everything that he did. The first consultant paediatrician in Cambridge, he ran his busy department with a miniiimum number of staff and beds. Besides being a first rate general paediatrician he was way ahead of his time in establishing neonatology as a subspecialty: measurement of fetal and neonatal blood gases was routine even in 1964. His careful statistics from the special care baby unit were invaluable in monitoring trends in perinatal mortality and morbidity since 1950. The papers on erythropoiesis that he and colleagues wrote in the 1950s are still useful. He himself was pleased with his article against circumcision, published in the BMJ in 1948, becautse it proved so provocative. Douglas brought out the best in people, having an informal manner and unfailing good humour and always being ready to praise. He had numerous outside interests and was a pleasure to be with as listener and talker. He considered that his one claim to fame was to have had Peter Pears in his madrigal group, Benjamin Britten as his fag, and W H Auden’s knee to sit on. After retiring he did a weekly clinic in London, worked for the Citizens’ Advice Bureau, played his tuba in a local band (he also played the flute), sailed, and retained his youthfulness and zest for life to a remarkable degree. He is survived by his wife, Nancy, and three daughters and five grandchildren. His youngest daughter was killed in a road accident more than 20 years ago. -GILLIAN GANDY