Walter Schwabe was born in 1843 at Openshaw, Manchester, Lancashire, the son of Stephan and Eliza (Sykes) Schwabe. He married (1) Jane Lay Arthy on 22 Sep 1874 in Brisbane, Australia, and (2) Ellen Payne on 27 September 1879 in Brisbane. 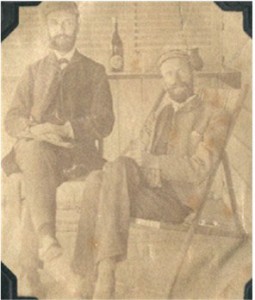 The children of Walter and Jane are:

The children of Walter and ELLEN PAYNE are:

NOTES ON THE ARTHY FAMILY
William Arthy was a music teacher for the Education Department. His son James was
a surveyor, who worked in north Queensland. James returned home suffering from
consumption and died at Tygum on 10 October 1886. William died on 22 July 1888.
Both men are buried in Henry Jordan’s Private Cemetery, Abelia Drive, Waterford West, Queensland.

ARTHY.—On the 22nd July. at Tygum House, Waterford, William Arthy, in his 55th year, of phthisis, leaving a widow and eleven children to mourn their loss. He anchored in hope and rested in Heaven.Mrs. A. F. Arthy  Obit — The Brisbane Courier -Thursday 7 April 1932

The death of Mrs. Annie Frances Arthy, wife of Mr. Alfred (“Dick”) Arthy, of Wynnum South, occurred last Saturday, at the home of her son, Mr. Harold C. Arthy, Athol-street, Yeronga, after a long illness. The deceased lady, who was the youngest daughter of the late Mr. George Hayward, Customs officer, Melbourne, and Mrs. Hayward, was bom In Fitzroy, Carlton, Victoria, in 1869. She wasa cousin of Mr. Thos. Hayward, the famous English cricketer. She was married to Mr. Alfred Arthy at Tygum, Waterford, Logan district, in 1889, and with her husband and family had resided in various parts of Brisbane since. In addition to her husband, the late Mrs. Arthy is survived by a family of three sons-Messrs. Alfred Clifford (Corinda), Harold Cecil (Yeronga), and Walter Cyril (West End)-and one daughter, Miss Doris Jenny (Wynnum South). There are also four grandchildren. A sister, Mrs. Byass, of Western Australia, also is living. The funeral took place to the Toowong Cemetery, the Rev. B. ‘A. Arnold (of Christ Church, Yeronga), officiating at the graveside.

Stephens—Schwabe An exceptionally pretty wedding, and one of interest to a large circle of friends, took place at 2 o’clock yesterdayat Holy Trinity Church, Valley. The bridegroom, Mr. William Blair Stephens, of Taipeng, Perak, Federated Malay States, is the eldest son of Mr. and Mrs. A. M. Stephens, of Wooloowin, and the bride, Miss Mabel Schwabe, is the eldest daughter of Mr. and Mrs. Schwabe, Mark-street, New Farm. The Rev. Cyril Mayhow, assisted by the Rev. E. C. Ganly, officiated. The bride, who was given away by her father, wore an exquisite gown of Rajah silk, richly embroidered in an Oriental design, and lined with chiffon taffeta. The bodice was inlet with yoke of tucked and gathered, chiffon, encrusted with pearls end draped with handsome silk lace, finished with garniture of pearls. The full court train of Duchesse satin was trimmed with chiffon tied at one corner with a bow, and ornamented with spray of orange blossoms,and mounted on pleated chiffon. The becoming toilette was completed by very pretty bridal veil, worn with a coronet of orange blossoms. She carried a bouquet of Choice white flowers tied with white ribbons, and wore some beautiful jewels (the gifts of the bride groom). The Misses Frederica Schwabe, Catherine Stephens, Muriel Schwabe, Edith Stephens, and Maud Stephens acted ;as bridesmaids. After the ceremony the guests drove to a city cafe, where a wedding breakfast was served, the large upstairs tearoom being very prettily decorated for the occasion with white flowers and palms and other greenery. The handsome wedding cake was made by Miss Wilde (a friend of the bride). (Late in the afternoon Mt. and Mrs. W. JB. Stephens drove to Sandgate, where they will stay for a few days ‘before leaving for Sydney. Letlhhridge—Morgan.