Robert Stephan Schwabe was born on 5 August 1841 the son of Stephan Samuel and Eliza (Sykes) Schwabe in Manchester. He was baptised at Manchester his baptism record is shown below:

Robert and Kini (Miyadera) Schwabe had three daughters, all born in Yokohama, and all before the above marriage. Perhaps there may have been a civil marriage before the above Church of England one:

For more details on the three daughters see below.

Robert died on 8 January 1908 at Yokohama and was buried at the Foreigners’ Cemetery. Kini Miyadera died on 13 December 1925 and was buried beside Robert.

According to family tradition the Schwabe house was furnished in two distinct styles; some rooms were entirely Western and others entirely Eastern but the two never mixed.

The following is based on the web site Meiji Portraits:

Robert first came to the Far East in 1859 to represent G. C. Schwabe’s interests in the firm Bower, Hanbury & Co. in Shanghai. He then left China for  Japan in 1868 where he was employed by J. Davison & Co.,  as a Public Silk Inspector and Commission Merchant, Yokohama # 28a. In the following year he became partner with N. P. Kingdon forming the Insurance Agency Kingdon, Schwabe & Co., Yokohama # 89. 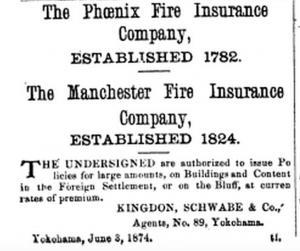 In 1892 Robert joined the firm Jardine, Matheson & Co., Trade and Insurance Agency, Yokohama # 1, additionally he acted as an auditor at the Japan Brewery Co. from 1888-1898 and was a member of the board of Directors of the Yokohama Printing and Publishing Co.

We regret to announce the death at the General Hospital on Jan. 8th of Mr. R. S. Schwabe, a very old resident of Yokohama. Mr. Schwabe, who was in his 67th year, has had a very long connection with the Far East.  He came out to Shanghai in 1859 and joined the firm of Bower, Hanbury & Co., [the successor to G. C. Schwabe & Co.] and after his arrival, the China war breaking, out he volunteered and was attached to the regular forces with whom he saw active fighting at the siege of Kading. One of the first to scale the walls of the city, he was selected to carry despatches from General Stabelley to the British Commander-in-Chief, Sir James Hope Grant. In 1868 he came to Japan, entering into partnership with the late Mr. N. I. Kingdon, of Yokohama, but after a long association this connection was severed and he joined the firm of Jardine, Matheson & Co. 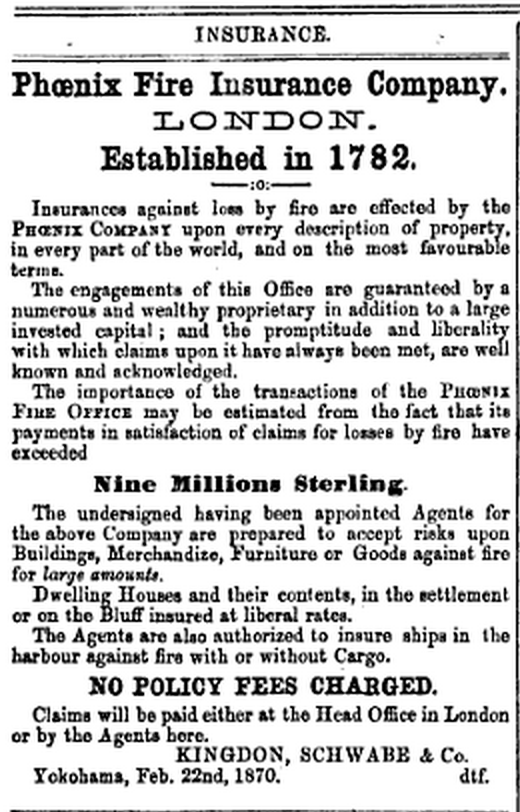 Early in 1901 he went home on leave, but on his way back to Japan his health broke down, and he was obliged to discontinue his journey at Malta and return to London. 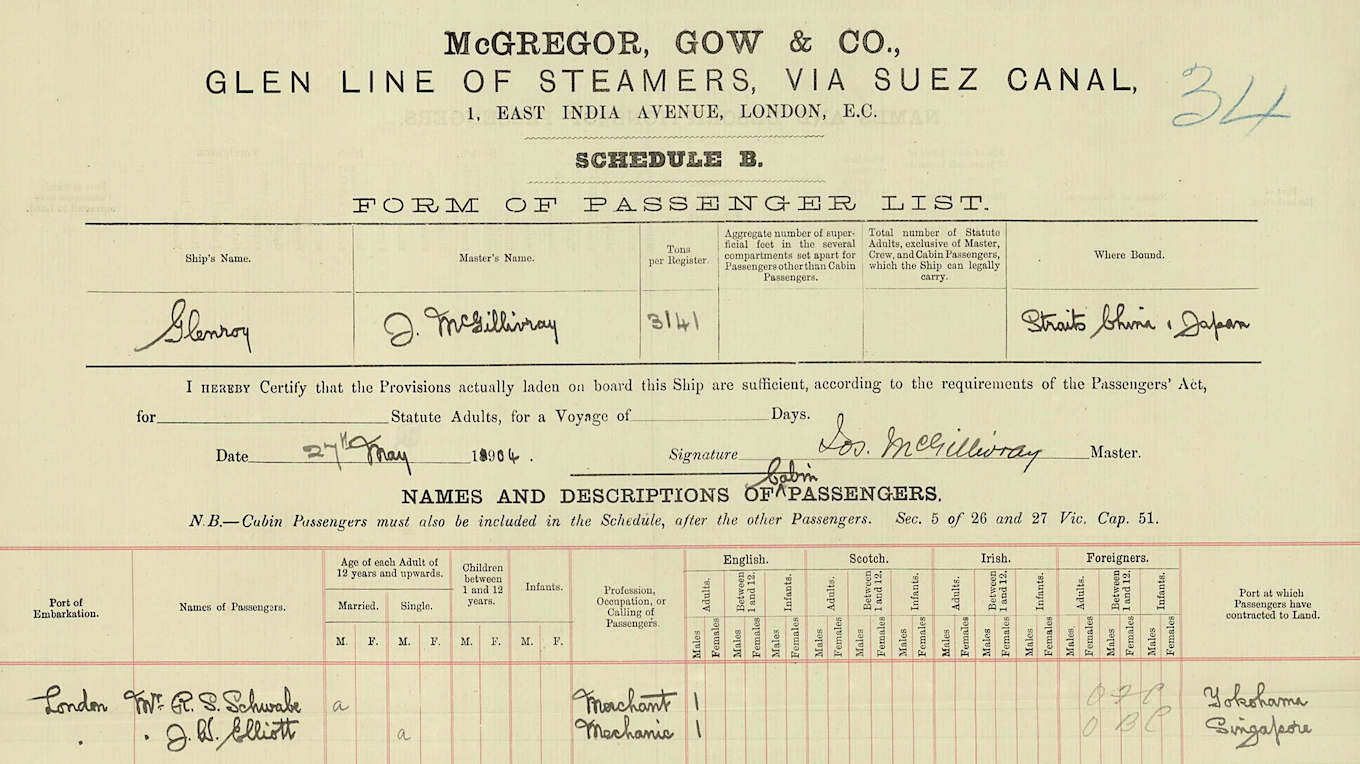 Three years later he came back to Japan, but his health gradually declined, and for several years he has been an invalid, suffering from heart trouble and other complications from which, after a painful illness borne with great fortitude, he-has now passed away.

The deceased gentleman leaves a widow and three daughters, two of whom are now in London. Miss Minnie Schwabe who, sadly enough, is so ill that she could not see her dying parent, is well known in Japan as an artist of very high gifts. To Mr. Schwabe’s family the deepest sympathy will be extended. Mr. Schwabe  will be remembered and lamented by a very large circle or friends.

1. Minnie Agnes. After her basic education she came back to Japan in 1902 and started work in 1903 with Sale & Frazar, Trade and Insurance Agents, Yokohama # 167.

She was not married and lived with her parents.  She died in 1918 and was buried beside her parents in the Yokohama Foreigners’ Cemetery. (See Meiji Portraits)

She contributed drawings to a book called: Japanese types: Sketched with brush and pen by Emily S Patton and illustrated by Minnie A Schwabe circa 1930 about 63 pages. (Consists of a series of 30 pictures by Minnie A. Schwabe with descriptive text by Emily S. Patton)

The following is from The North-China Herald and Supreme Court & Consular Gazette, Volume 79, 6 April 1906:
Miss Schwabe of Yokohama, and Mrs. Patton of Shanghai, have just been made the joint recipients of the following letter from the Japan Society, London, 20, Hanover Square. 9th February, 1906.
Dear Mesdames,—I hasten to thank yon with great pleasure, at the request of the Council of the Japan Society, for your very kind gift to the Library of this Society of your most interesting and beautiful book “Japanese Types which I have placed on the table in the Society’s Library, and which I need not say has been very much admired and praised by members and others who have visited the Library. Believe me very truly yours,
Albert E. Bricb,
Secretary.
Since the publication of her sketches in the above-mentioned book, Miss Schwabe was selected for her artistic ability, to design and illuminate the addresses from the representatives of the British Navy League in Yokohama, to Admiral Togo, and from the foreign community of Yokohama to Prince Arthur of Connaught.

2. Nellie Edith Miadera.  Although born in Japan she was baptised in Manchester over twenty years later on 16 November 1902:

Nellie trained as a nurse and appeared on the 1901 census listed among the staff of The London Hospital, Whitechapel: 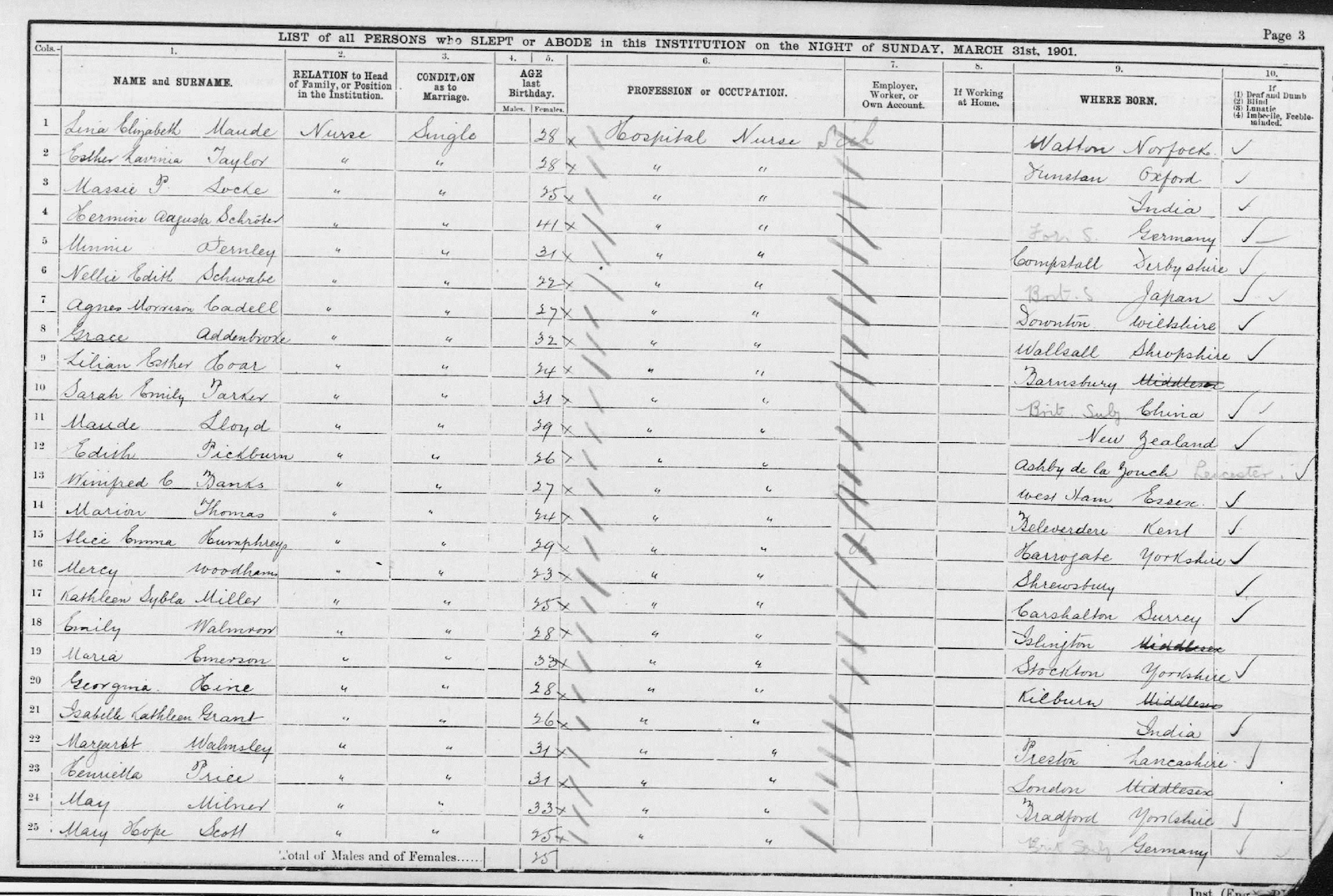 Nellie Schwabe on the 1901 Census

In 1914 she is listed among passengers aboard the Kitano Maru heading out from London to Japan. 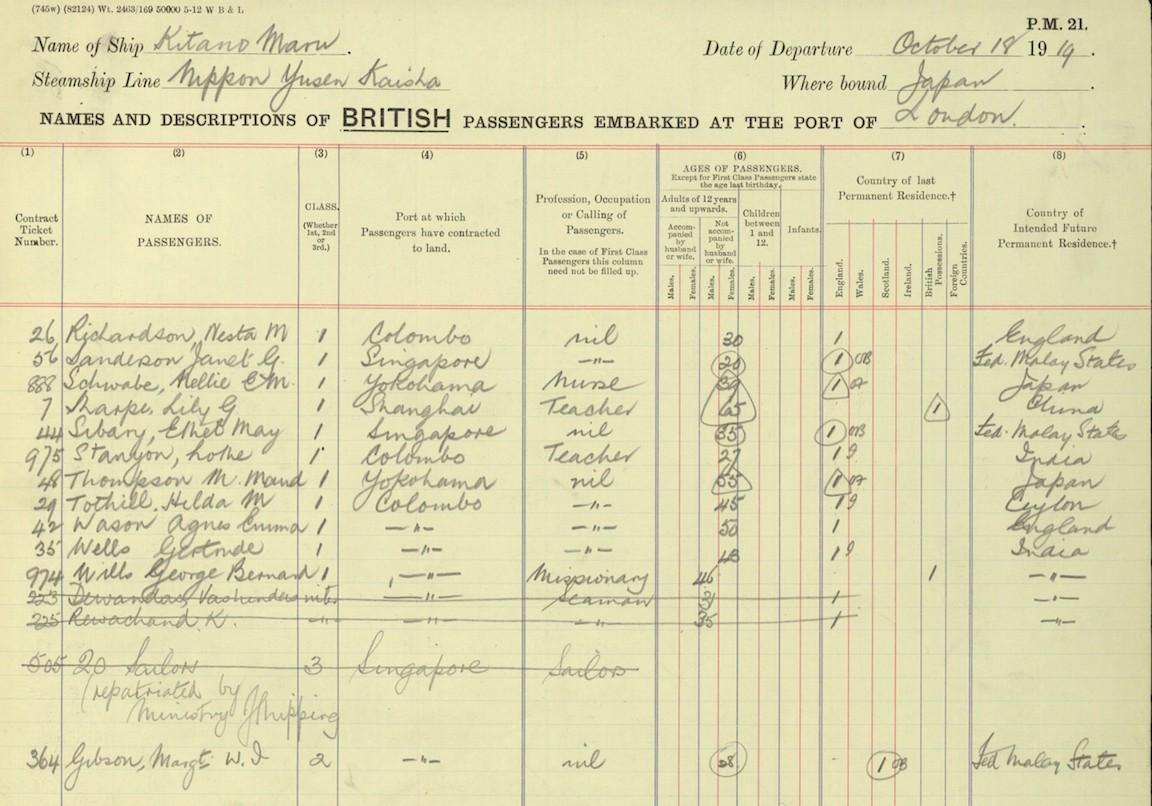 Nellie Schwabe listed among passengers aboard the Kitaro Maru

She lived a long life dying in 1968 aged 89 at Hove, Sussex. A search for her probate record has so far not been successful.

In the possession of the family is a letter written by Nellie Schwabe to Randolph Schwabe, dated 11 January 1946:

Gustave [Schwabe], after vain attempts to get 10 Herbert Crescent repaired, has sold it and gone back to Malvern and hopes to get a flat or small house later on.  It’s very hard on the poor old things when they have lived a set life in one spot for so many years, – Paper Mill House, Standon, Herts.

Family lore has it that  Nellie assisted the artist Edward Le Bas in running his household. Her sister Clara made Edward the executor of her will (see Clara’s probate record below). 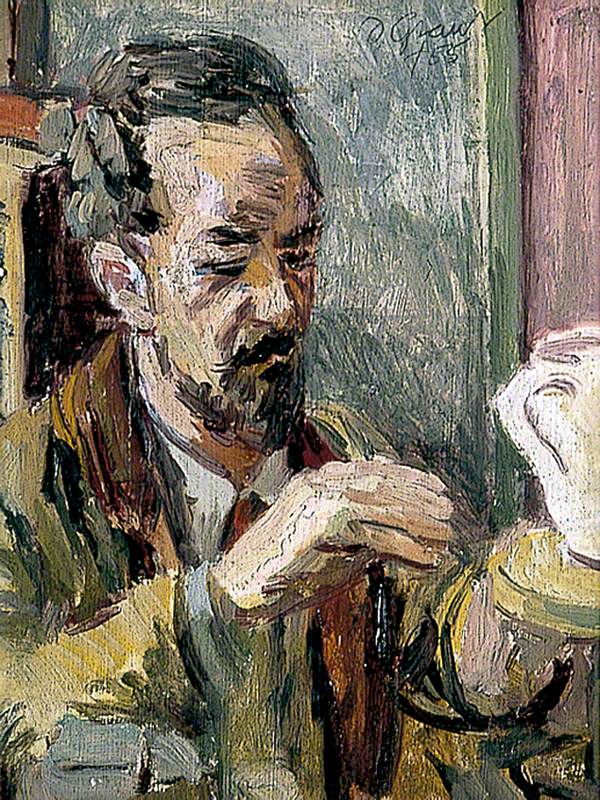 3. Clara Ethel Miyadera was born in 1889 in Japan but baptised much later on 18 January 1901 in Manchester (see second entry below): 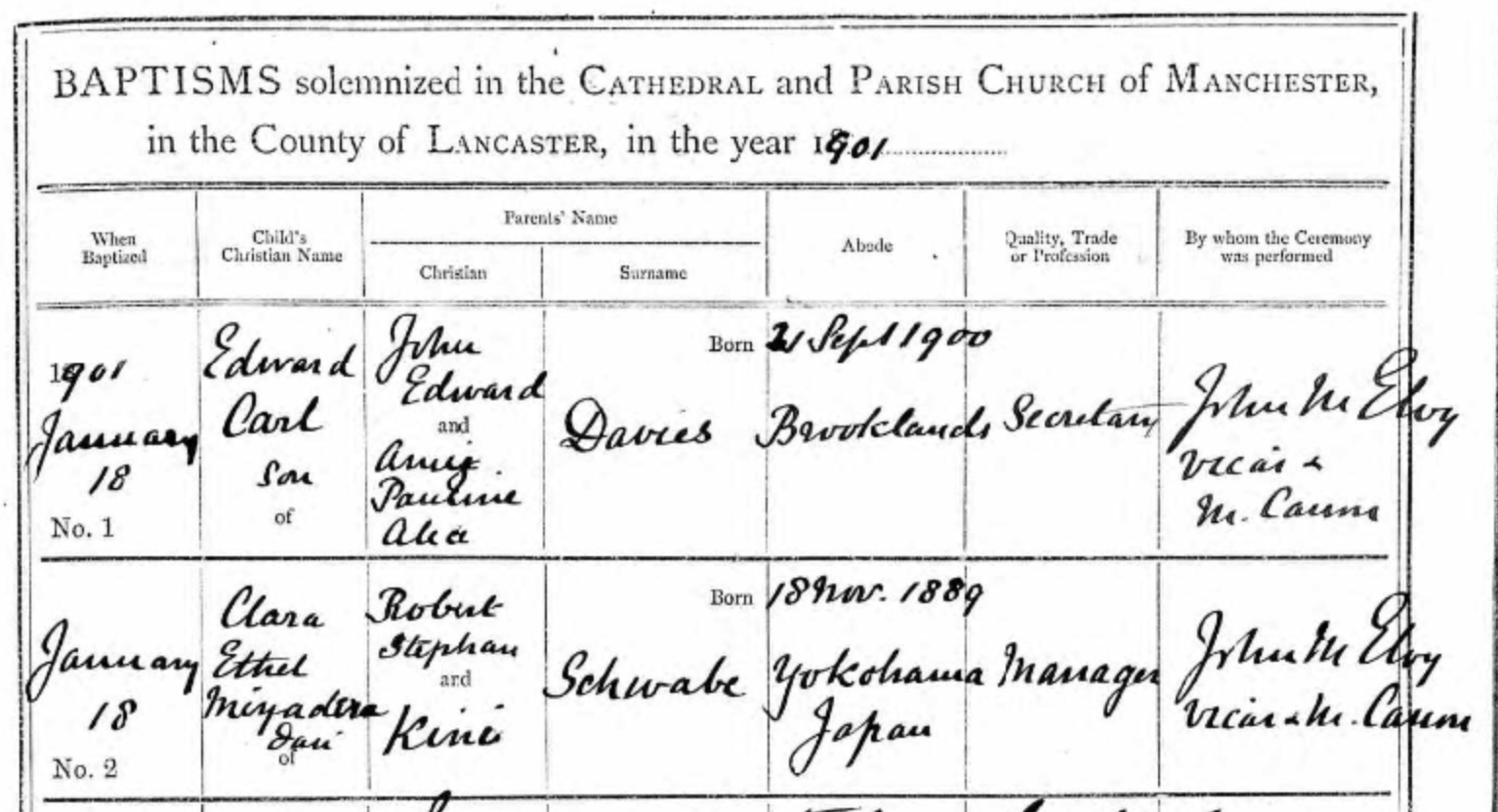 Clara appears on the 1911 census with her aunt Adeleheid Schwabe.

On 23 May 1917 she married the artists Francis Sydney Unwin at St Saviours, Hampstead.

Francis Unwin died on 26 November 1925. A short biography with some of his drawings was published in 1928 and can be read HERE. His probate record is below:

Clara died, on 31 August 1933 at The London Hospital, Whitechapel, London where her sister Nellie was a nurse. Her probate record is below:

What is interesting about the above record is that the artist Edward le Bas was the executor. Clara (along with her sister Nellie) was a close friend of Edward’s and supported his career as an artist.

Born 11 February 1885 at Stalbridge, Dorset. Francis and his family appears on the 1891 census, residing at The Rectory where his father is the vicar, see last entry below: 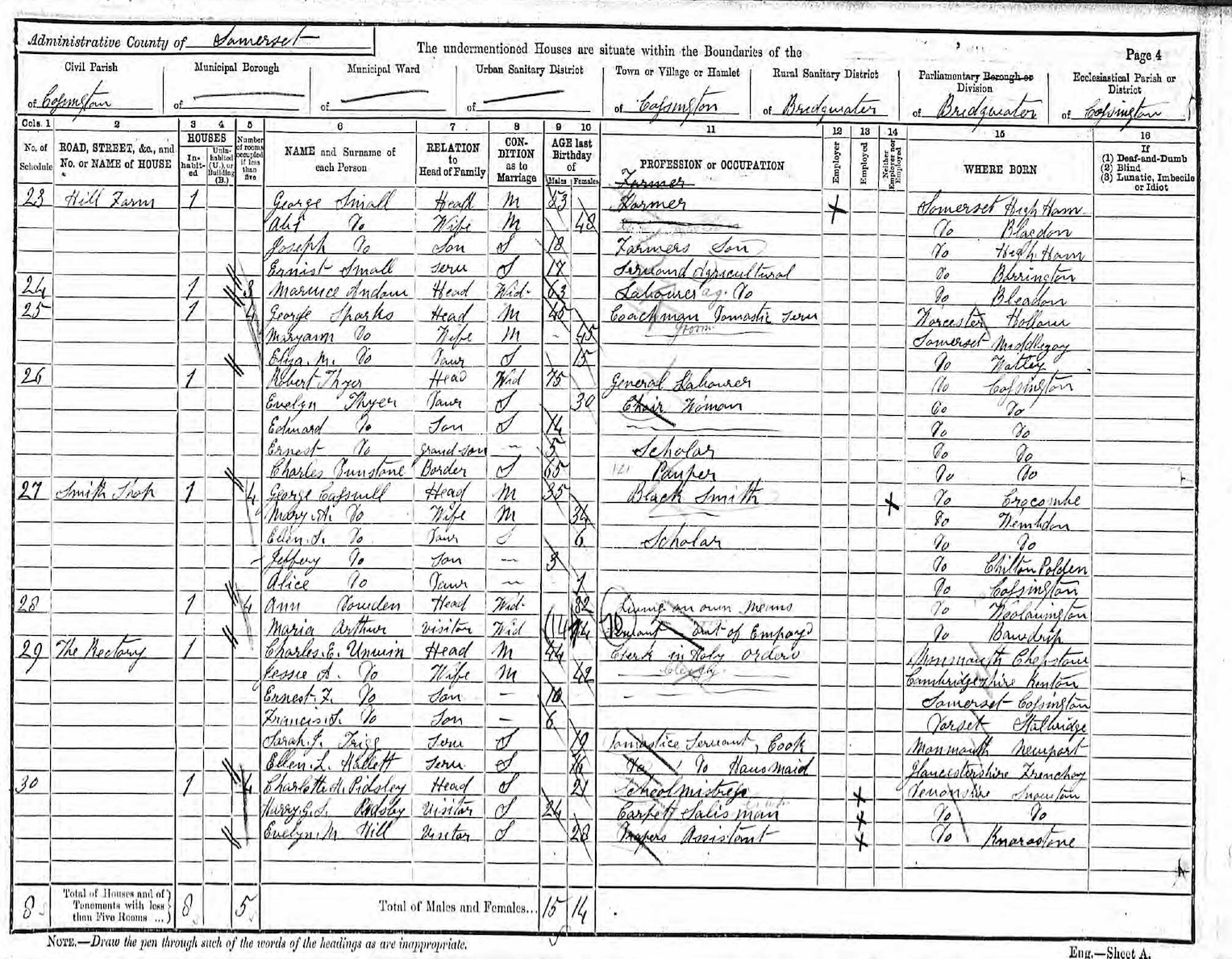 The Unwin family on the 1891 census

He studied at Winchester School of Art and at the Slade School 1902–5. Travelled in Holland, France and Italy. Spent the winter of 1908 in Egypt drawing the interior of tombs for an archaeological expedition. This was published by the Metropolitan Museum of Art under the title The Tomb of Nakht at Thebes. Settled in London 1909; member of the N.E.A.C. 1913; held first exhibition with Randolph Schwabe at the Carfax Gallery 1915. Published The Decorative Arts in the Service of the Church 1912. Began suffering from consumption in 1916. Visited Switzerland for his health in 1920 and 1921.

A highly temperamental individual, F. S. Unwin would occasionally destroy large sections of his work (acts which were described by Schwabe as ‘occasional holocausts’) ; as a consequence, much of his work is now scarce. His moods were much affected by his persistent ill health  – ultimately, his career was cut short by his death on 26 November 1925 at the age of 40 from consumption. He died at Mundesley-on-Sea, Norfolk.  A memorial exhibition was held at the St George’s Gallery in 1926. 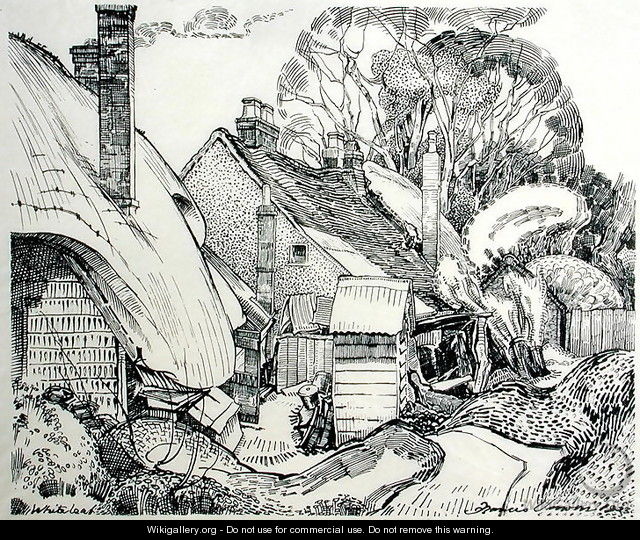 A further mention of Unwin in The Times: 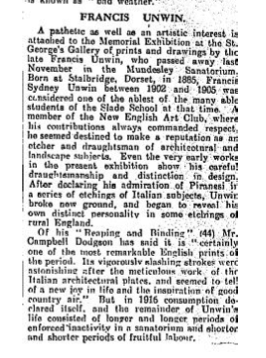 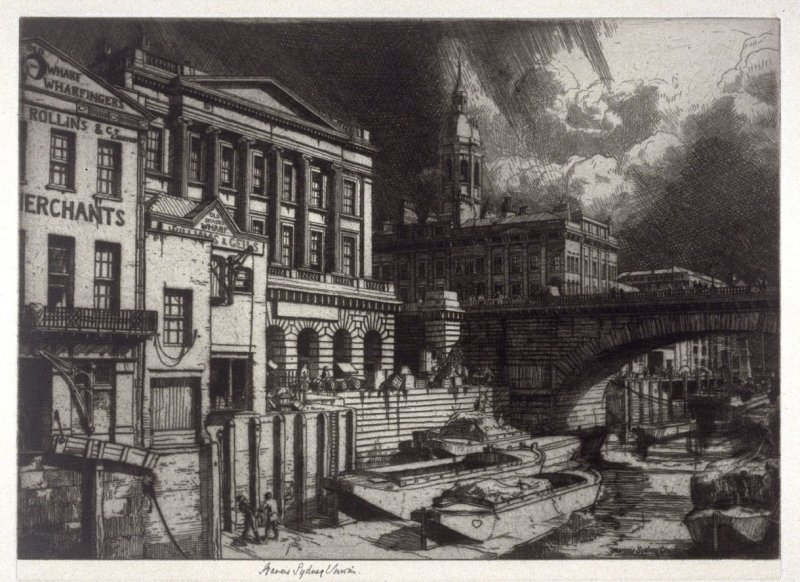 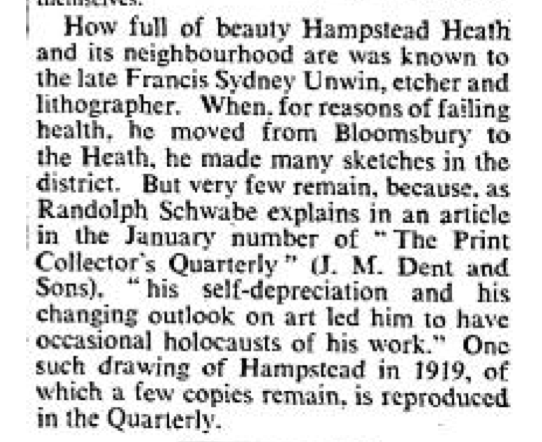 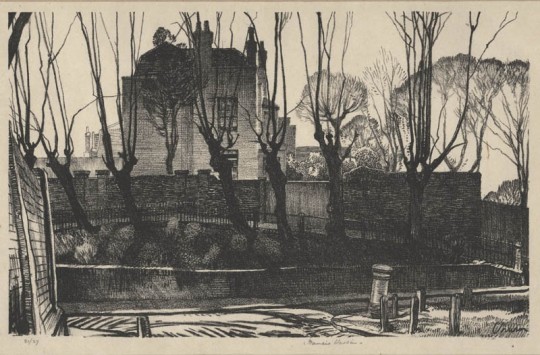 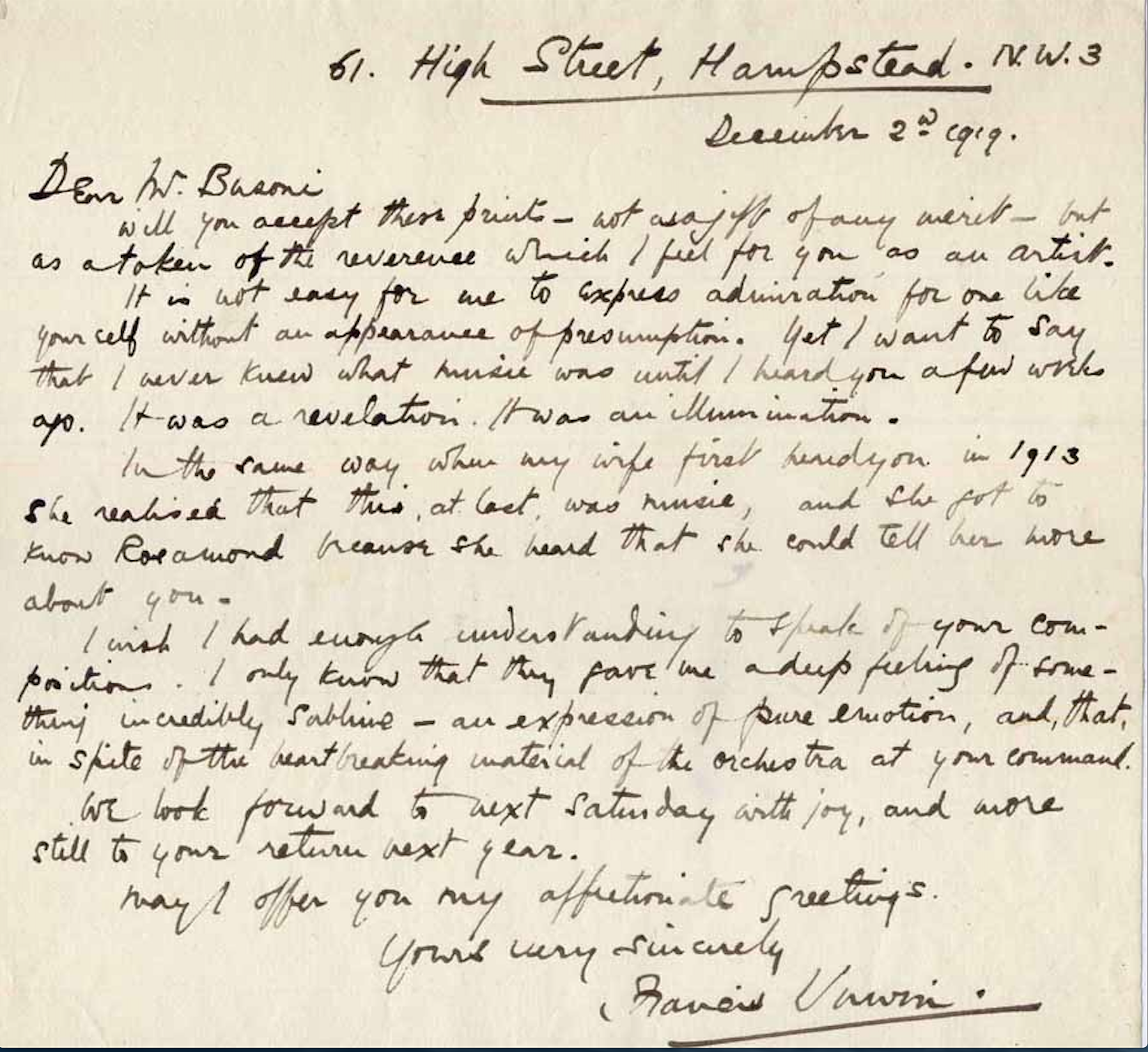 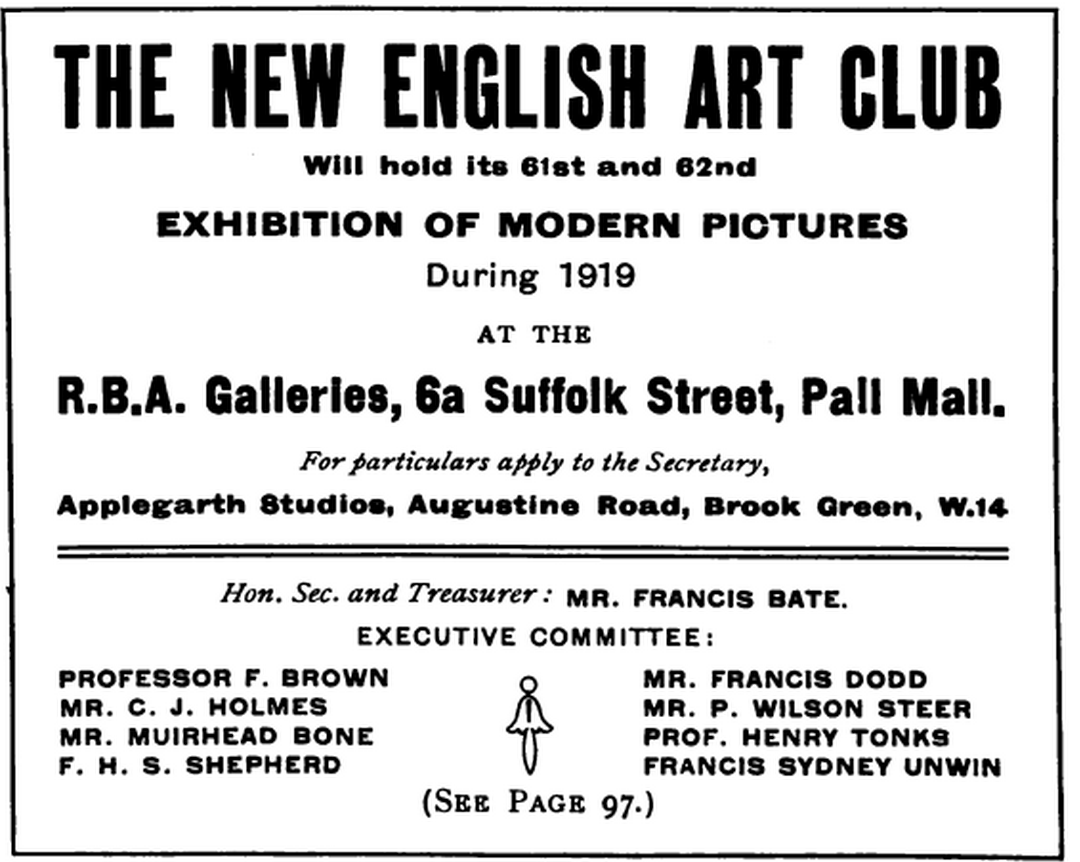 Below, some contemporary notices:

Below, four examples of Unwin’s watercolour drawings found in the Metropolitan Museum of Art’s publication: The Tomb of Nakht at Thebes

No. 1. The vintners picking the grapes and pressing out the wine: The fowlers netting birds, plucking and drying them, and packing them in jars. 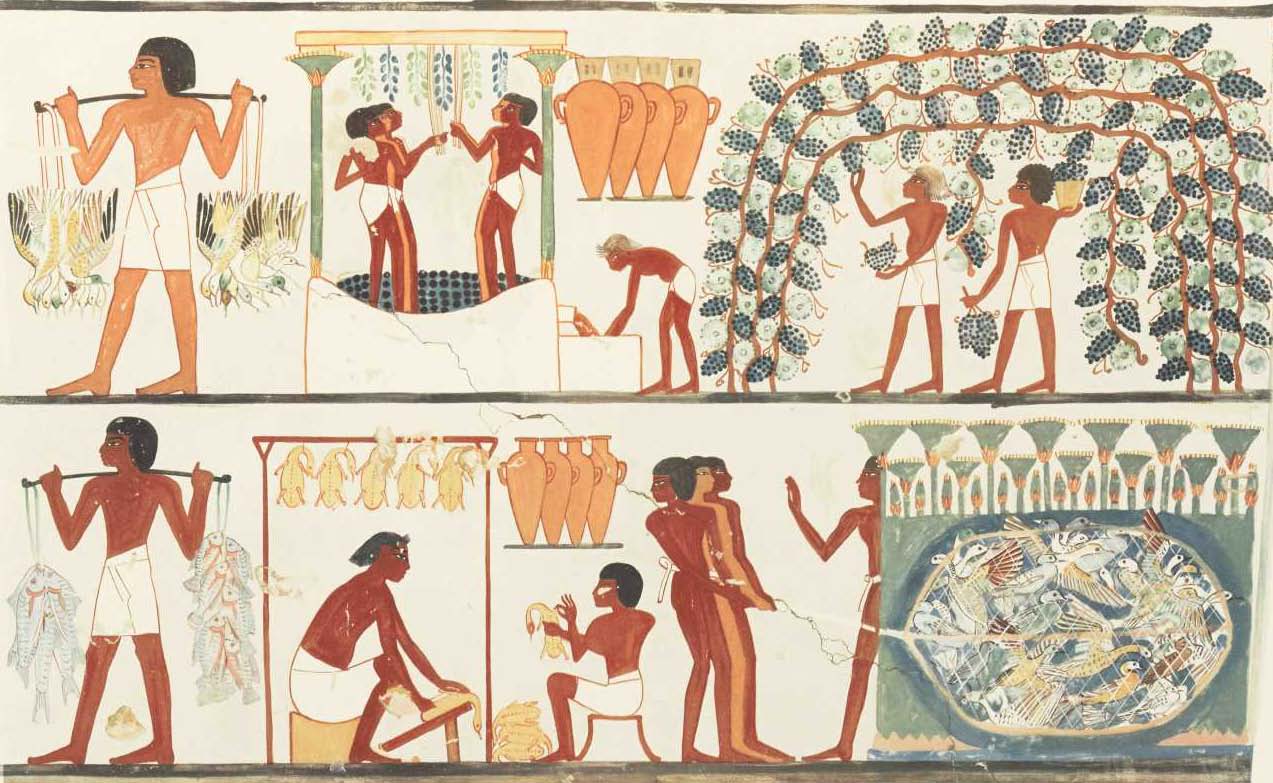 No. 2 Nakht and his wife seated in a booth while servants bring to them the fruits of the labours of the Vintners, fowlers and fishermen. 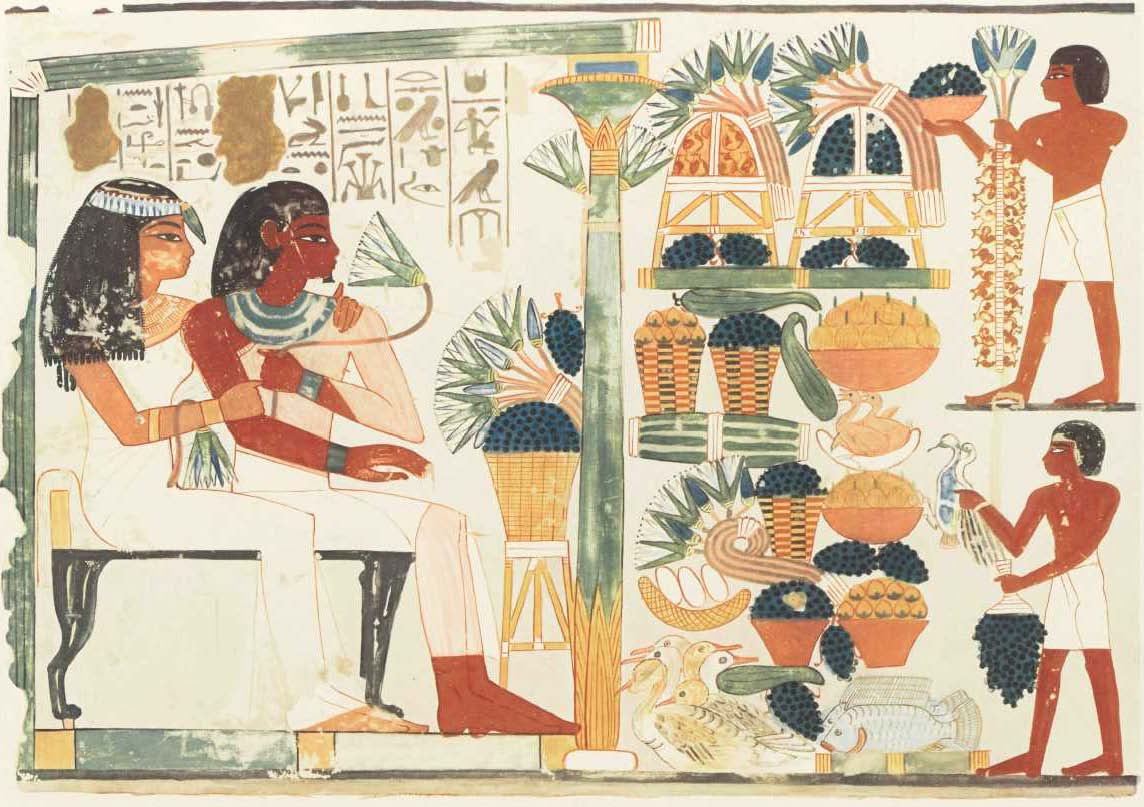 No. 3 Nakht and his family hunting birds and spearing fish in the marshlands 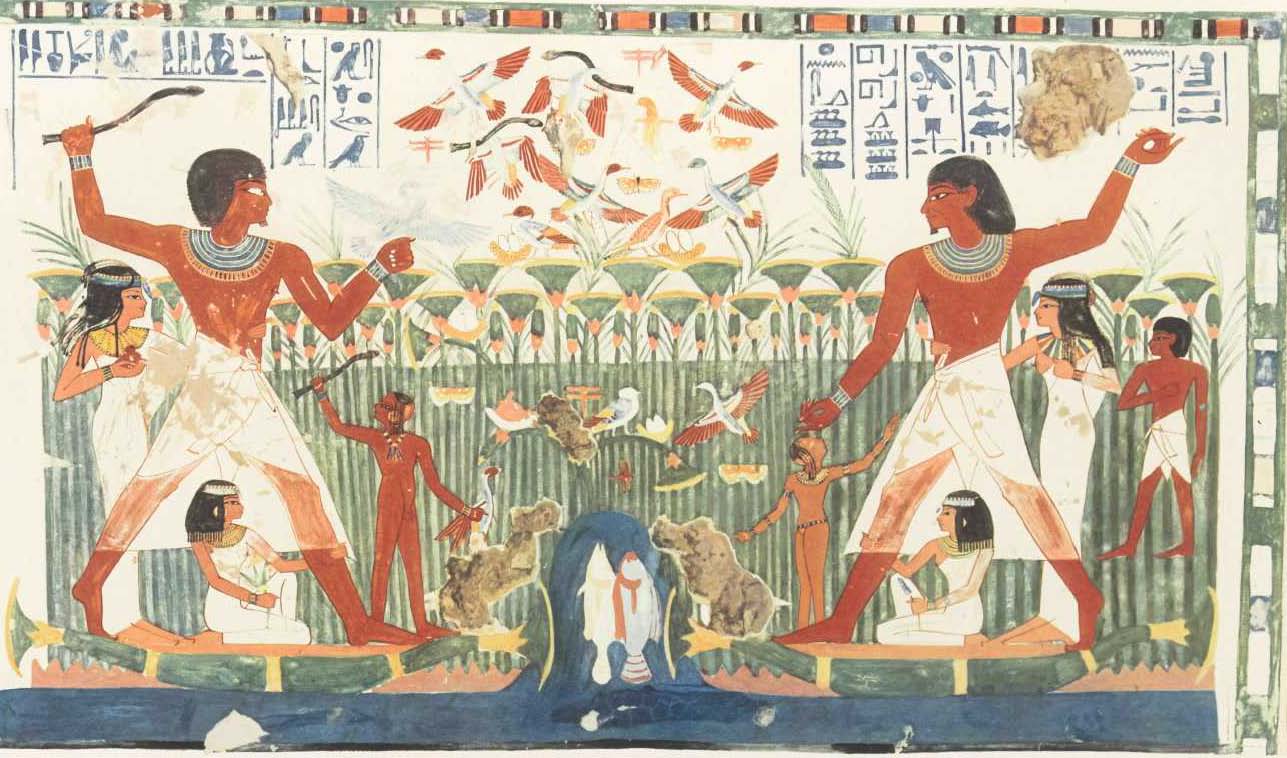 No. 4: The Nut goddess and a pile of viands and flowers beneath the stela on the south wall of the tomb. 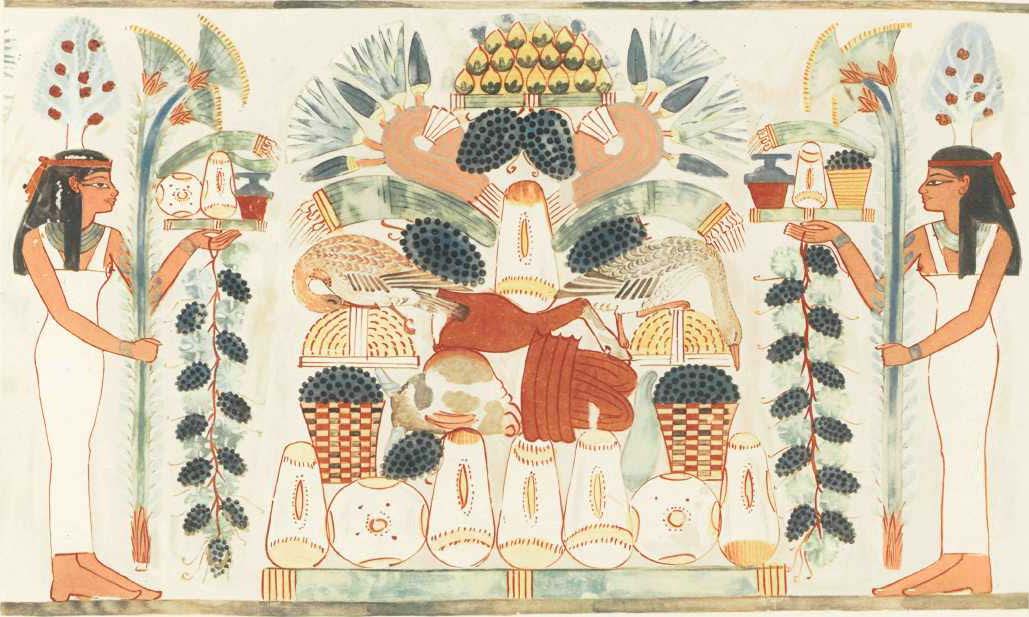