Eric Anthony Schwabe was born on 5 February 1883 in Barton on Irwill, Lancashire, the eldest son of Lawrence and Octavia (Ermen) Schwabe. He died on 12 May 1945 at Bexhill on Sea. Eric changed his name from Schwabe to Sykes in 1917.

The information below is taken from various other sources.

Eric Anthony Sykes worked for a British import / export company, selling weapons manufactured by Remington and Colt to both China and India. He also organized hunting trips in India for rich Englishmen. He joined the Shanghai Municipal Police (S.M.P.0 in 1926) and became an Inspector in charge of a unit of snipers.

Eric Anthony Sykes was a civilian. He was employed in Shanghai by the S. J. David Company, estate agents, and held a reserve rank in the S.M.P. as sergeant in charge of the snipers unit (a volunteer organization of skilled marksmen). E. A. Sykes, for his part, was a shikari of considerable experience, and an uncommonly gifted marksman. Born in Great Britain under the name Eric Anthony Schwabe, he saw service as a sniper in the First World War, changing his name to Sykes because he allegedly found his true name too Germanic. Aa article on Eric’s career written by Phil Matthew’s can be read HERE. 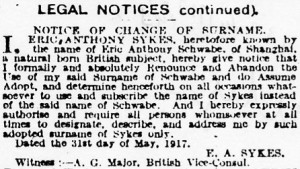