Lawrence Schwabe was born on 8 January 1857, the youngest son of Stephan and Eliza (Sykes) Schwabe.

He married Octavie Henrietta Ermen in 1881 at Barton upon Irwell they had two children:

Lawrence went into business with Robert Clay but he was not a very successful businessman and the partnership was dissolved as noted in the Liverpool Mercury on 19 November 1888 (second entry below).

According to a a notice that appeared in the Manchester Courier and Lancashire General Advertiser on 1 January 1889, Lawrence and his brother Charles formed a business partnership 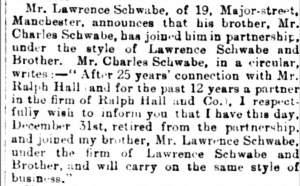 Lawrence died in February 1933 A search of probate records has not so far found one for Lawrence but Octavie’s has been found: