Louis Schwabe was born on 27 August 1831 at Manchester, the son of Louis and Eliza (Thackeray) Schwabe. His baptism on 23 September at St. Anne’s is below:

He married Elizabeth Blanche Hartwright in April 1864 at Chorlton, Lancashire.

The children of Louis and Blanche are: 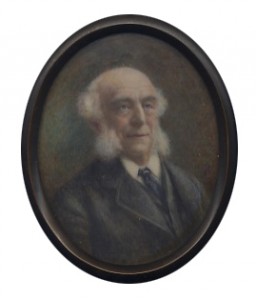 NOTE: The secretary of the Cross Street Unitarian chapel at Manchester has provided the following listing of baptisms at the chapel which include Louis’s children and which can be read HERE (<— in PDF). Unfortunately he transcribes ‘George Bowstead’ as ‘George Boris’ which has been the cause of some confusion.

The following press clipping which has been transcribed has passed down through the family and quotes Louis Schwabe’s recollections of an event involving his father Louis Schwabe (1798 – 1845). Unfortunately, the clipping comes undated and without the source.

Mr. Louis Schwabe, whose name was mentioned by Mr. Hewitt in last week’s “City News,” lived at No.1, Plymouth Grove, and his son, also named Louis Schwabe, dwelt there some seven years, from about the year 1839. The latter is, therefore, one of the oldest surviving of the former residents in that locality. His father was a manufacturer of silks in Portland street. He remembers the chains and posts which have so frequently been referred to, and also a number of the former inhabitants, including Mr. Mackay, who was Mayor of Manchester, and Mr. S. L. Behrens. In regard to the latter he states:

“My father once saved three of his sons from drowning. The boys were coming home from school in Dover street and went to skate on the pool; the ice gave way, and they were plunged into the water. My father at once took off his coat and succeeded in rescuing all three. We have at home a silver goblet given by Mr. S. L. Behrens to my father in commemoration of this event.”

Mr. Schwabe is now eighty-two years of age and his recollections of the district are, therefore, of special interest. X. Y. Z. [Note: If Louis Schwabe was 82 at the time this article was written then it must have been written 1912-1913].

Subsequent to the above the original article about the incident has been recovered from The Manchester Guardian for 1 December 1838 below: 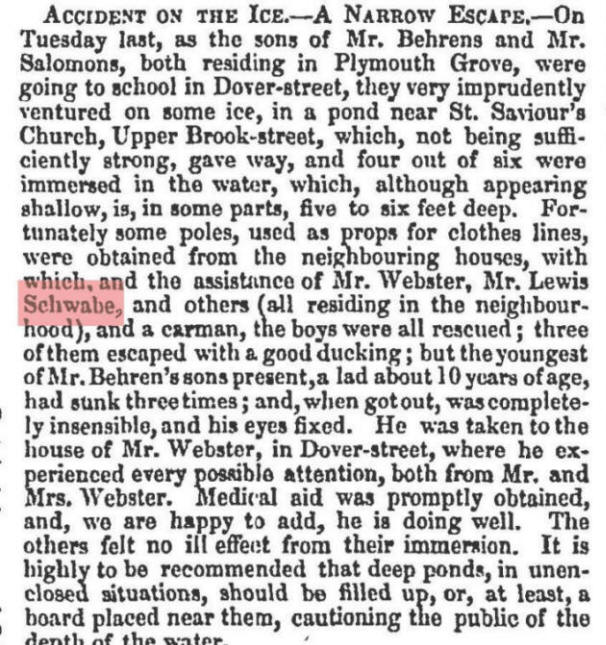 Below, Hart Hill the Schwabe family home from the 1880’s to 1925 when it was sold to Salford City Council and demolished in 1927. 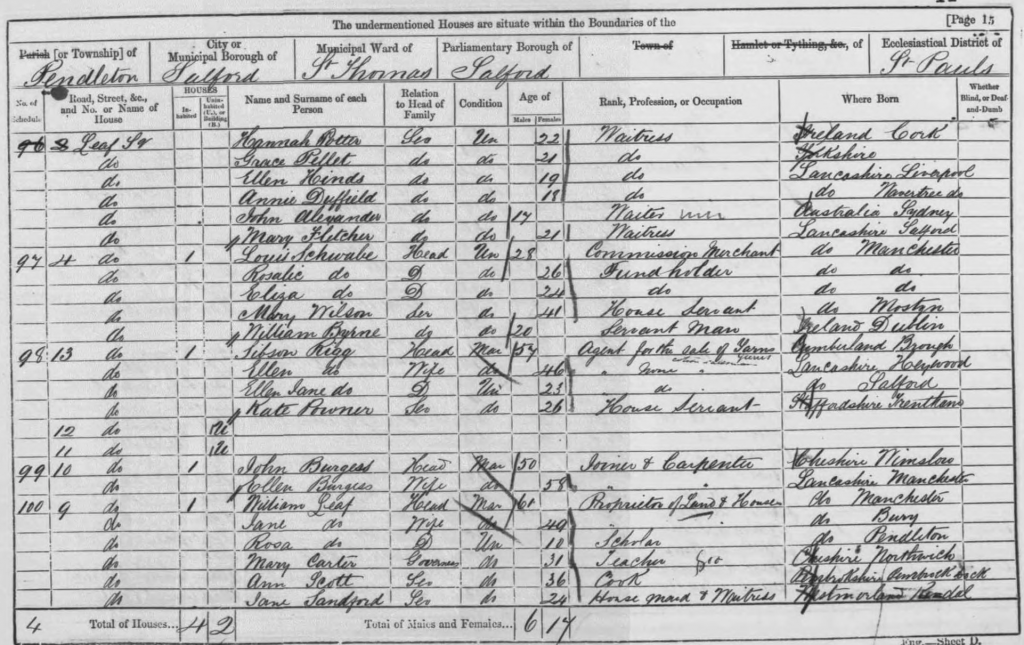 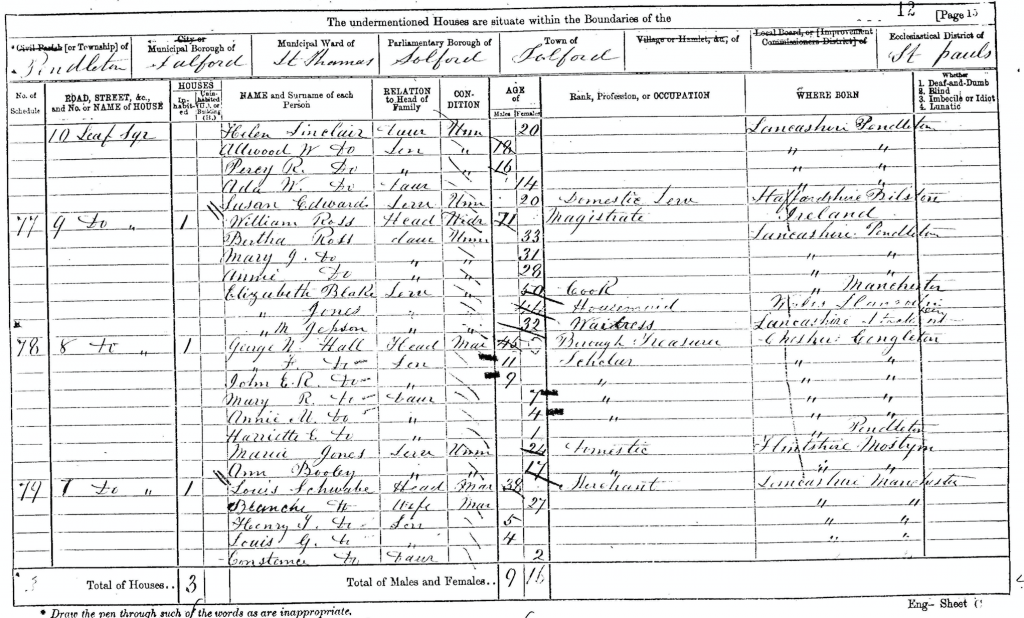 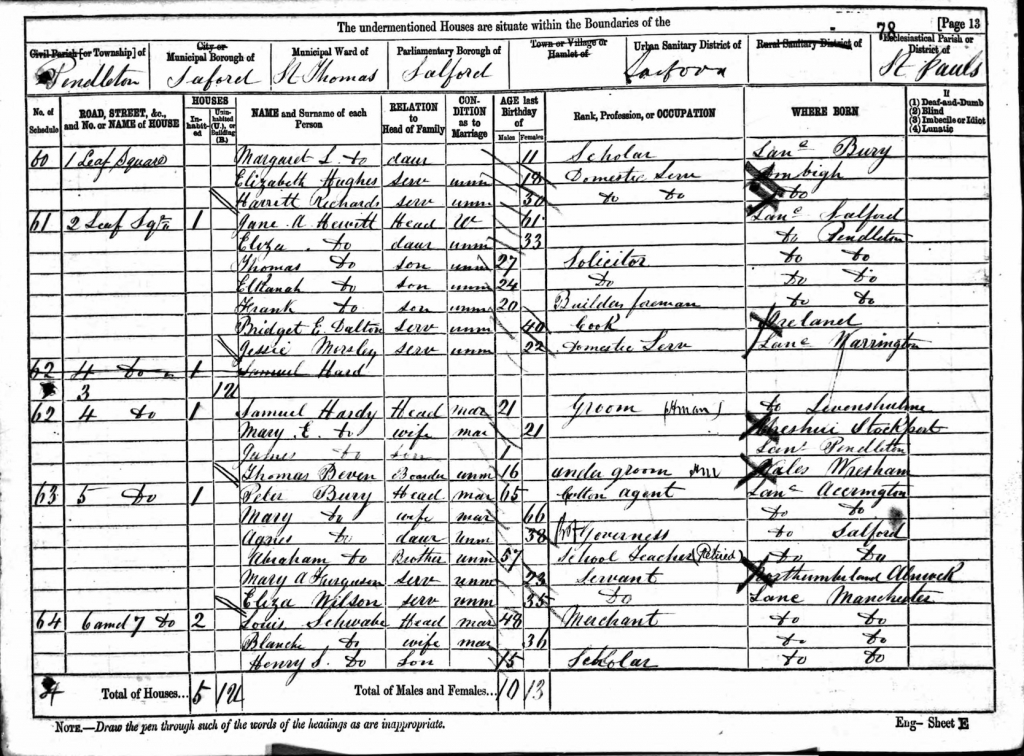 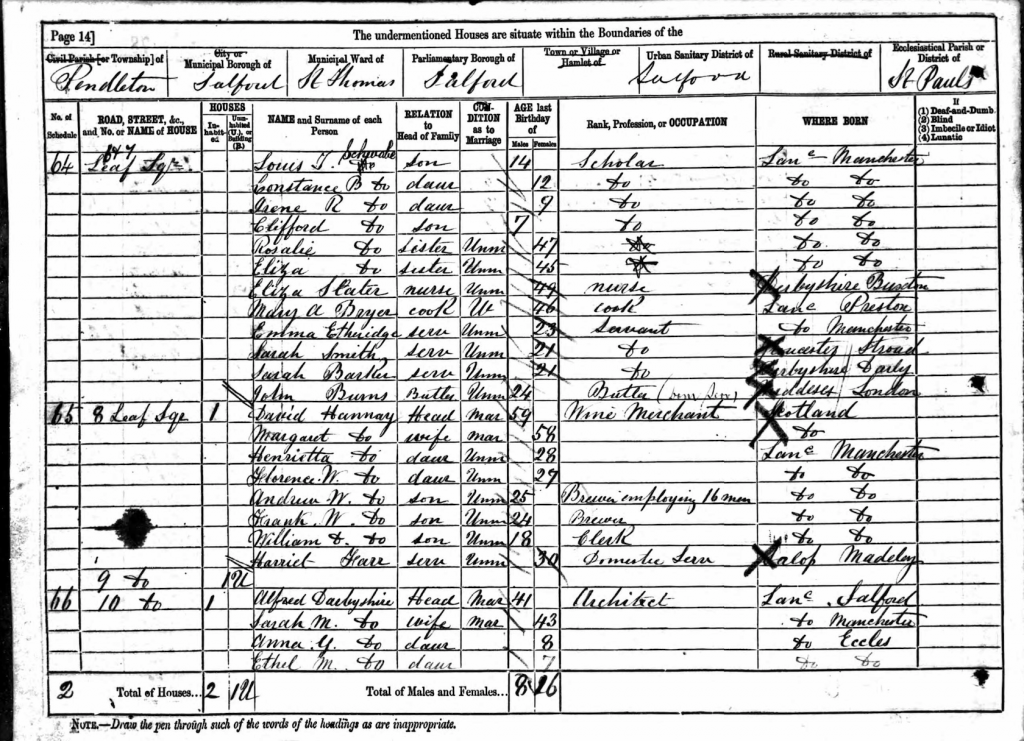 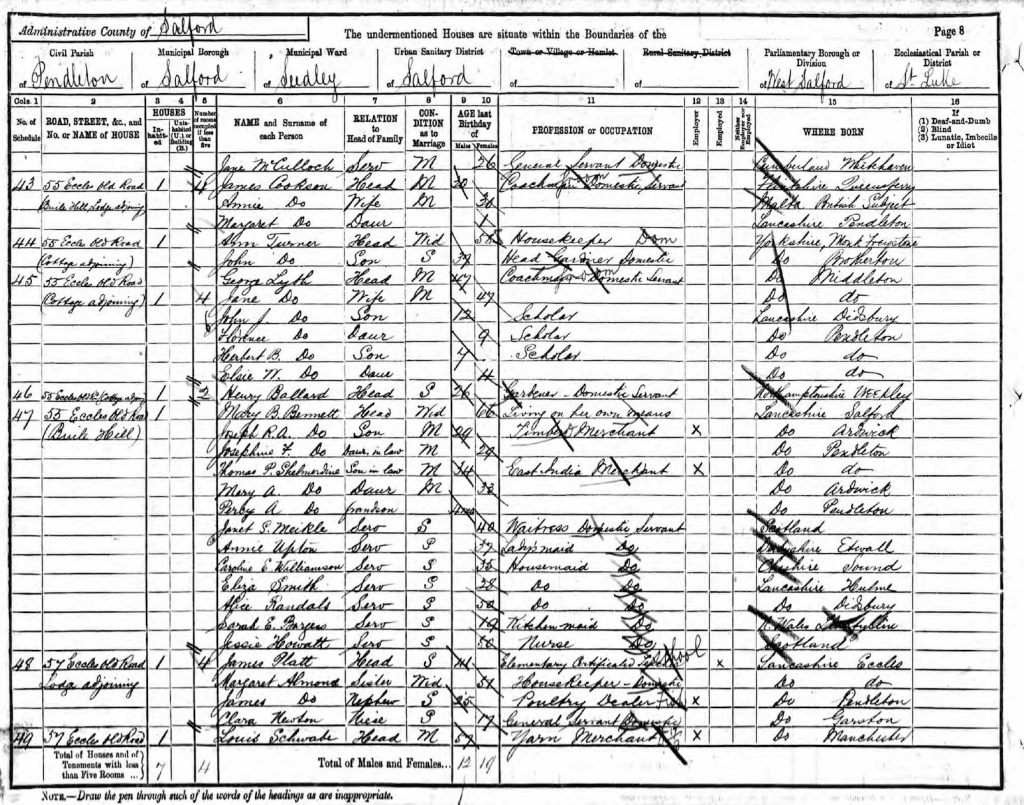 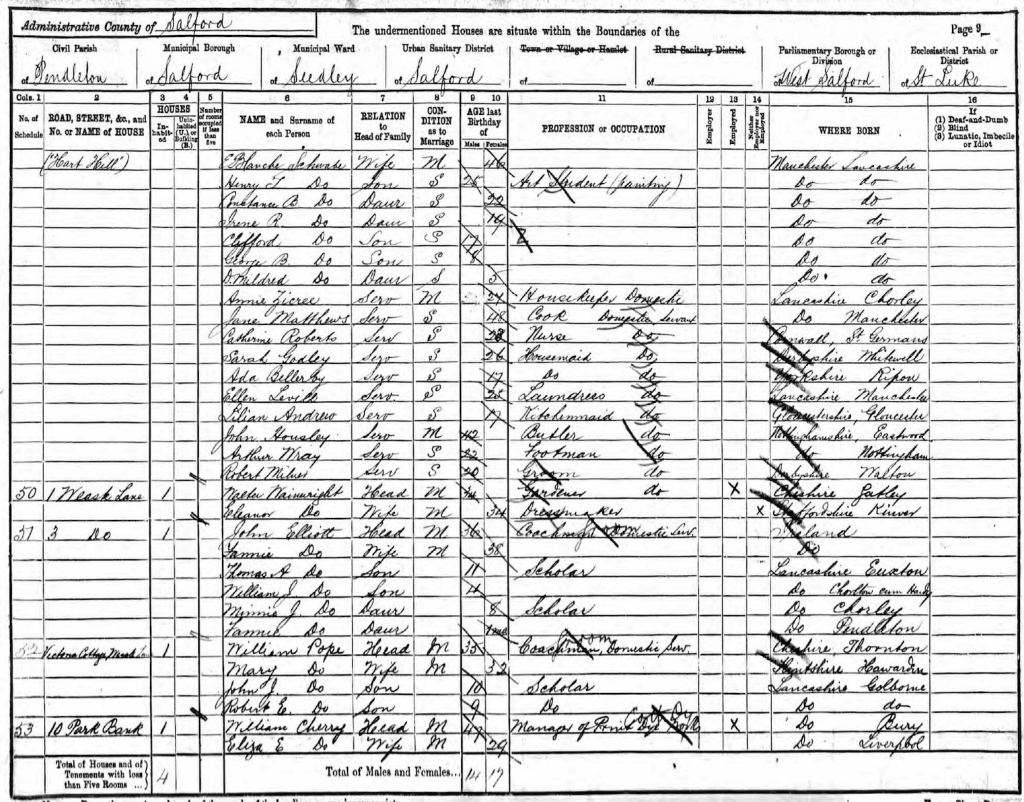 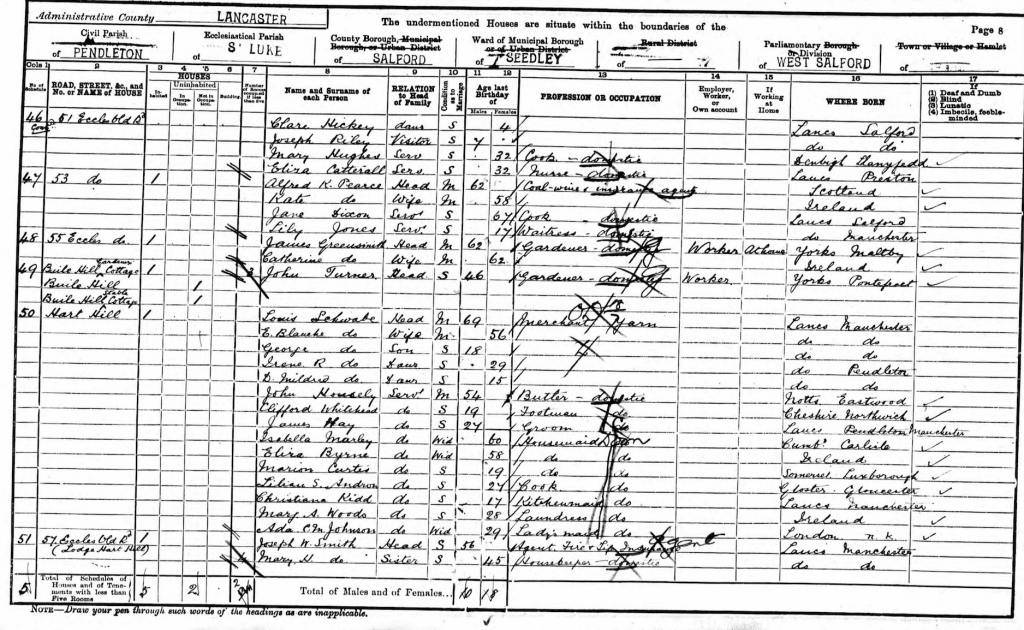 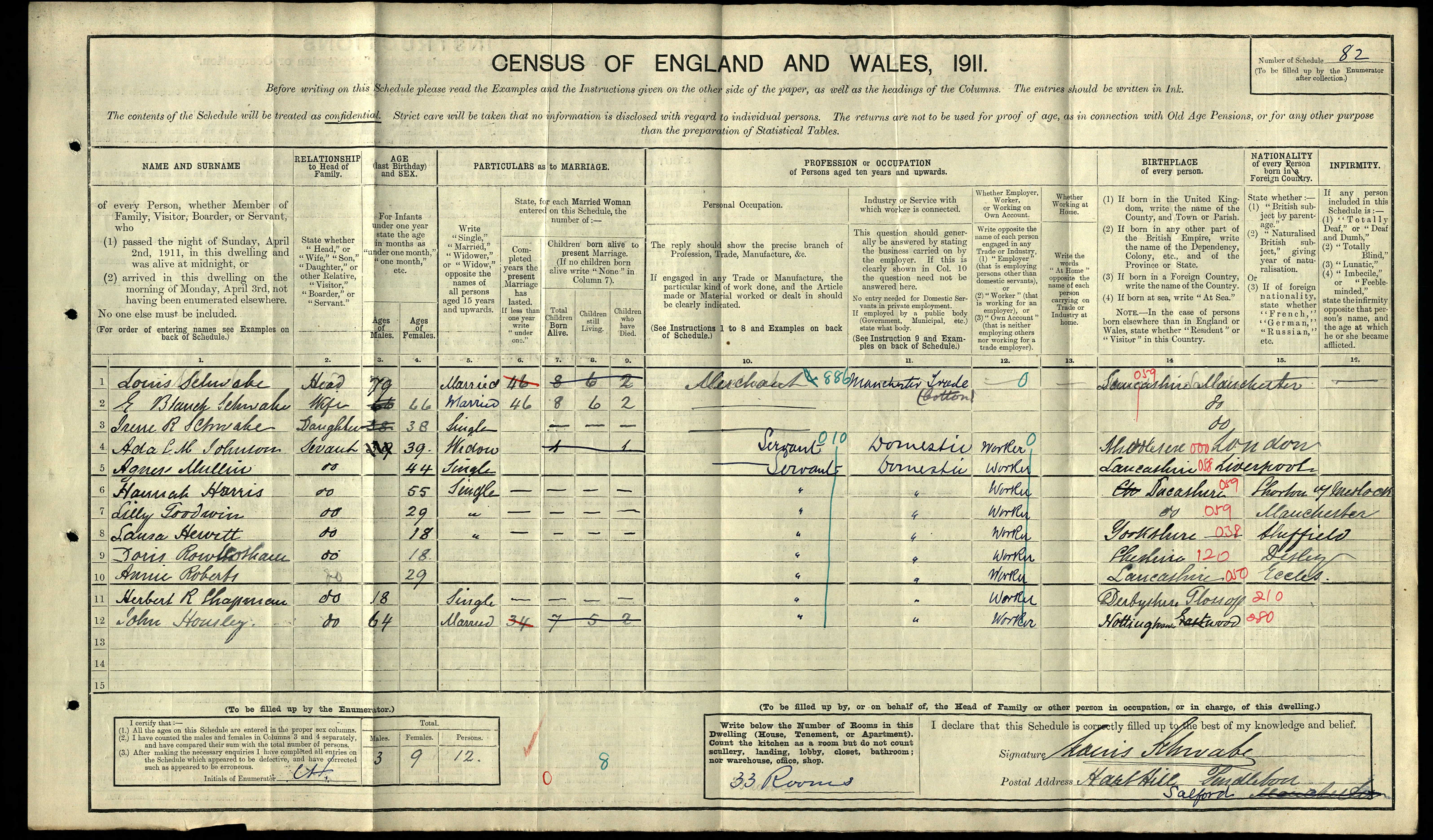 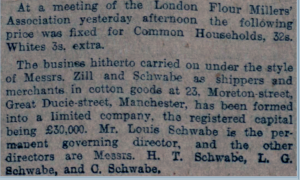 GEORGE BOUSTEAD / BOWSTEAD SCHWABE
So far we have been unable to locate a record for the birth of George. His middle name is of interest as explained on the Boustead – Schwabe page on this website HERE.  He died quite young (26) and his death was announced in the Manchester Guardian on 23 March 1909:

His funeral was noted in a local newspaper below. What is of interest too is the reference to Louis Breslauer among the ‘chief mourners’ and his son Edwin Breslauer. Louis was the brother of Adolphus Bresalauer who married Theresa Reis. Theresa’s brother Alphonse Louis Reis was the grandfather of Allwynne Reis who married Frank Otto Stoe Man. 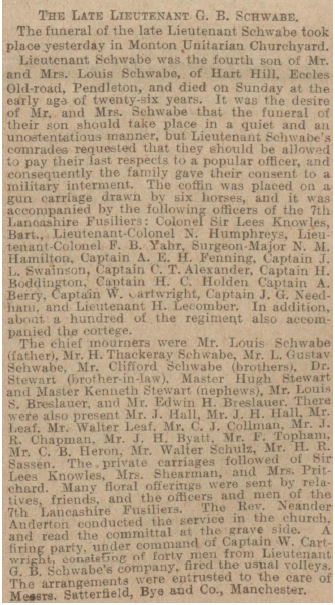 George’s death registry is below. It shows that he died from a coma induced by Diabetes Mellitus and that the certificate was signed by his brother in law Dr. Alexander Stewart.

George’s probate record is below.

Constance married Alexander Stewart MD on 18 June 1891 at St Luke’s near Eccles, Salford, Lancashire. He was 36 and she 23.

While residing at South Bank, Eccles Road, Pendelton they had at least the following children: 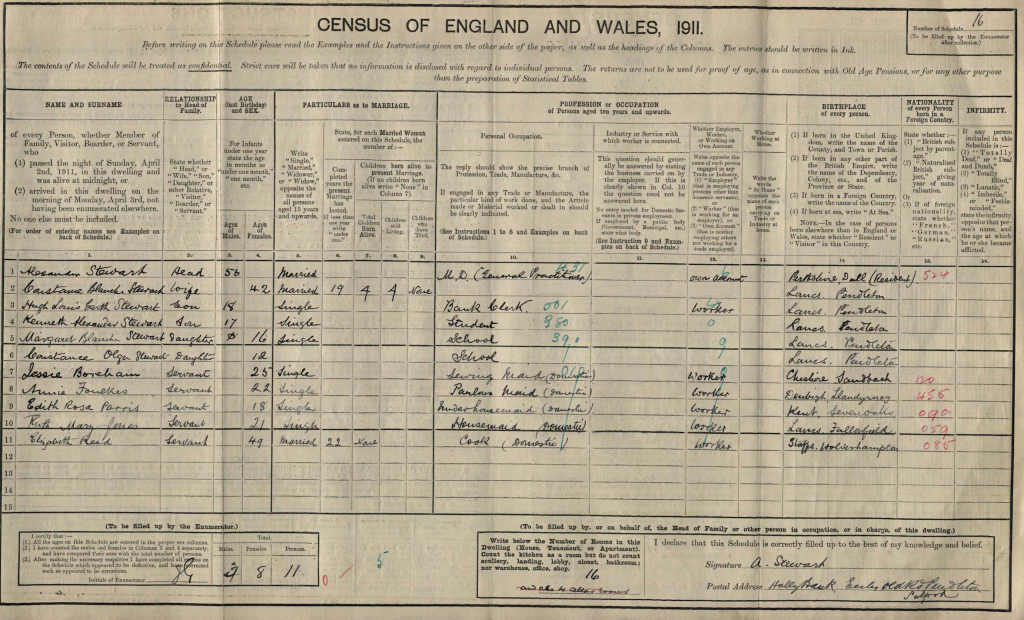 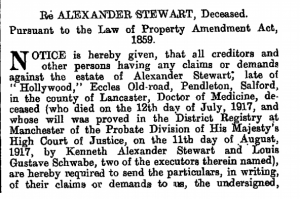 Constance’s Probate Record is below:

So far no descendants of this ‘Stewart’ line appears to have survived.