Thus Elizabeth Fane is the direct ancestress of all those members of the Man family who are descended from Edward Desborough and Louisa Mary (Harris) Man, and there are a lot of those.

Elizabeth Fane was the daughter of Robert Fane of Combe Bank,  Sevenoaks, Kent and his wife Mary Cartwright, daughter of William Cartwright of the Aynhoe family. She survived Robert and married a gentleman named Fulke Grosvenor.

Robert was the son of Francis Fane, 1st Earl of Westmorland (1580-1629) and his wife Mary Mildmay (1582-1640), the only surviving daughter and heiress of Sir Anthony Mildmay of Apethorpe in Northamptonshire, by his wife Grace Sherrington, daughter and coheiress of Sir Henry Sherrington, of Lacock in Wiltshire. Francis Fane was the son of Thomas Fane and Mary Neville. 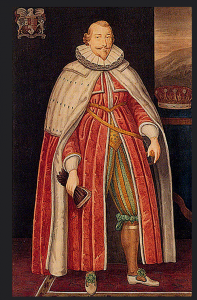