Thus Mary Davie is the direct ancestress of all those members of the Man family who are descended from Edward Desborough and Louisa Mary (Harris) Man, and there are a lot of those.

Below the arms of John Davie (d.1710), Mary (Davie) Incledon’s father. He was a wealthy Bideford tobacco importer of Orleigh Court. 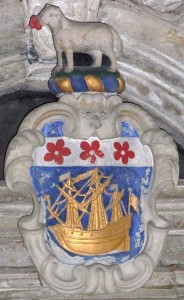 John Davie married Mary Luscombe and they had at least two daughters:

And a son Joseph Davies who had a son:

John Davie, Esq. of Orkigh, in the parish of Buckland Brewer, Devon, and who married Eleanor Basset and they had the following children:

1 Joseph Davie, who succeeded to Watermouth and Timberleigh, and assumed, by royal licence, the surname of Basset, in pursuance of his mater uncle’s will (Francis Bassett.