The Crosthwait family connects with the Man family on the marriage of Katherine Rosa Man to Leland George Crosthwait [LGC] on 3 November 1911 at St. Lukes, Chelsea, London. Leland was the son of Samuel Crosthwait. The obituary below is to LGC’s brother:

HERBERT LELAND CROSTHWAIT, who died on September 11 [1940], aged seventy-two, was the eldest son of the late Mr. Samuel Crosthwait, of The Lodge, Bagenalstown, County Carlow, Ireland, and educated at Bossall and at Trinity College, Dublin. He entered the Royal Engineers in 1890. Two years later he went to India and in 1897 he joined the Survey of India, in which he remained for the rest of his service. Here he soon became well known for his very extended knowledge of a variety of scientific subjects; in fact, if he had concentrated on any one subject he would easily have been one of the authorities on that subject. His wide knowledge and experience, however, made him a most delightful companion. He could talk well and easily and with full knowledge on many topics. 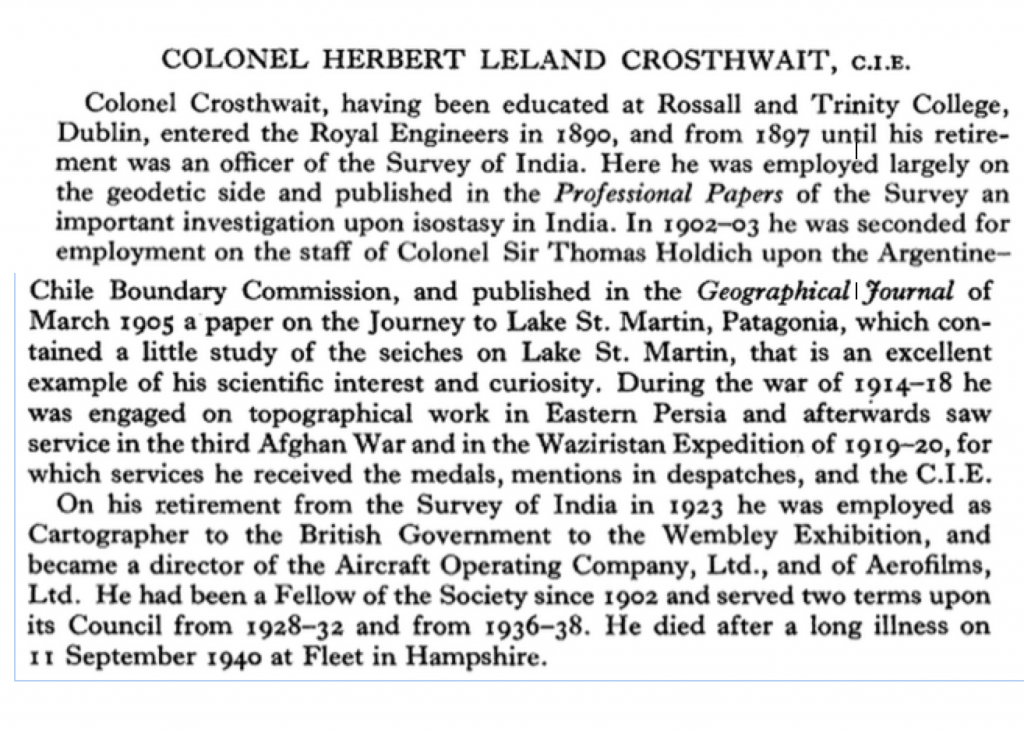 Leland Crosthwaite, 61 Fleet Street, and Dollymount, was elected a member of the Dublin Society on 28 April 1796, his proposers being Joshua Pim and William Cope. He was a sugar and flour merchant, the son of Thomas Crosthwait and Mary Maquay, and a cousin of George Maquay. In 1774 he married Anne, daughter of Jonathan Darby of Leap Castle, King’s County. Three of their daughters married into the family of Joseph Hone. Leland Crosthwaite was a trustee of Nelson’s pillar and a director of the Bank of Ireland, his recommendation being influential in saving Robert Shaw’s bank from failure in 1820. He was a director of the Bank of Ireland 1787,1789,1791,1793-4, and 1796-1825, and governor 1808-10. He was also a founder member of Dublin Chamber of Commerce in 1783, and associated with the chamber until his death in 1826. Leland Crosthwaite senior was deleted from the R.D.S. membership list in 1827. 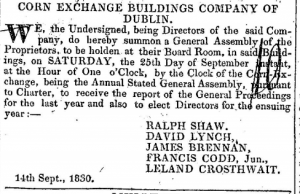 Leland Crosthwait was the foremost Dublin merchant of his time, who concentrated on the mercantile rather than the political. A founder member of Dublin Chamber of Commerce in 1783, and a Presbyterian, he was born on 15 December, 1747 to Thomas Crosthwait (1714-1783) and Mary Maquay. The Crosthwait family originally came to Ireland at the time of Cromwell from Cumberland in England. Three of his six daughters married three sons of Joseph Hone. One of his sons-in-law was William Hone, a previous president of Dublin Chamber.

Thomas Crosthwaite, Fleet Street, brother of Leland Crosthwaite junior, was elected a member of the Dublin Society in 1801, his proposers being Jeremiah D’Olier and Thomas Burgh. He was a member of the family firm, and of the Ouzel Galley Society, a commissioner of wide streets, and a vice-president of Dublin Chamber of Commerce. Thomas Crosthwaite or Crosthwait was one of the three commissioners appointed by the government in 1821 for the assistance of Irish trade and manufactures. He was president of Dublin Chamber of Commerce 1857-70. During the 1860s he was recorded by the R.D.S. as Thomas Crosthwaite, J.P., 9 Fitzwilliam Square east. He also had a residence at Mulberry Hill, Chapelizod, and owned flour mills in Leixlip and in County Carlow. Thomas Crosthwaite was a director of the Bank of Ireland in alternate years 1826-32, during 1834-69, and was governor 1844-6. He played a significant role in negotiations with Peel’s government on banking in the 1840s. He was deleted from the R.D.S. membership list in 1870. –

George Maquay, merchant and sugar baker, Thomas Street, was elected a member of the Dublin Society on 28 May 1767. His proposers were Thomas Litton and Dr Perceval. He was elected to the Society’s commerce committee on 8 April 1773. Maquay was a founder member of Dublin Chamber of Commerce in 1783, and a director of Bank of Ireland in alternate years 1787-1800, and in 1802-06. He was also an active board member of the Grand Canal Company of Ireland until 1810, and a trustee of Nelson’s pillar in 1805. A grandson of Reverend Thomas Maquay of the Plunkett Street Congregation, he was also, (through his grandmother’s second marriage to Reverend John Leland), a cousin to Leland Crosthwaite (q.v.). George Maquay was deleted from the R.D.S. membership list in 1821.