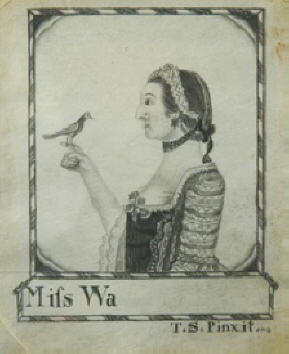 The Waddington family appears here on the Man family web site through the Craddock family as follows: in about 1635 Tobias Cradock married Susannah Bourne and they had at least two children: Richard and Susannah. Susannah married Dr. Henry Barnes and they had a daughter Susannah Barnes who married John Balchen. John and Susannah’s granddaughter Mary Balchen married John Man. Meanwhile Susannah’s nephew William Craddock had a son Sheldon who had a son Marmaduke who, on the 3rd of October 1776, married Margaretta Waddington (shown right holding a bird). Margaretta’s mother was Sarah Tyrwhitt, whose mother Mary was a Drake. Mary Drake’s mother was Elizabeth Montagu whose grandfather was Edward Montagu, 1st Baron Montagu of Boughton. Thus these Waddington pages will contain some information on the families of Tyrwhitt, Drake, Montagu, etc. The descendants of Marmaduke Craddock and Margaretta Waddington were conscious of their maternal ancestry and later Craddock generations included: Tyrwhitt Montagu Craddock, Charles Tyrwhitt Craddock, Marmaduke Montagu Craddock, etc. We should note that Sarah Tyrwhitt’s brother John LaFontayne Tyrwhitt was the last in the male line and in his will he gave all his ‘estates’ to the Drake family.

Mr. Waddington [the Prime Minister of France] had a good fortune, and his family was of very ancient origin, though at that time it had fallen into insignificance. Walter de Waddington was lord of Waddington in Lincolnshire, and had a daughter, who in the thirteenth century married Sir Roger Tempest, Knt., of Bracewell. In the eighteenth century there are records of inter-marriages with the families of Beckwith of Aldborough, Tyrwhitt of Stamfield, and Cradock of Hartforth in Yorkshire.

Picking up on these ancestral claims made by Augustus Hare, a Mr. M. L. E. Tyrwhitt (MLET) posed the following question in the May 29 1897 issue of ‘Notes and Queries’:

Henri Waddington. Can any of your correspondents give me information as to the direct descent of the late distinguished French statesman Henri Waddington? Was he the grandson or great-grandson of Samuel Waddington, who married Sarah Tyrwhitt, of Stainfield, Lincolnshire, sometime before 1755? And was the expatriation of his family due to the will of Mrs. Samuel Waddington’s brother, Sir John de la Fountayne Tyrwhitt, who, in 1755, left the ancient manor of Stainfield (conferred on his ancestor by Henry VIII.) to the Drakes of Shardeloes, Bucks, with the right of bearing the name and arms of Tyrwhitt, to the total exclusion of his sisters [ e.g. Sarah who married Samuel Waddington] and their sons, as well as the younger branch of Tyrwhitt of Cameringham, from whom all the Tyrwhitts now extant are descended? Sir John Tyrwhitt’s mother was Mary Drake, of Shardeloes, therefore the great-grandson of her brother [William Drake] had no sort of Tyrwhitt blood. Yet Sir John Tyrwhitt left him the estates with the name and arms of Tyrwhitt, and thus his descendants, who are not Tyrwhitts in the faintest degree, represent the eldest branch of the family, while the Shorts of Keal, and the Brackenburys of Spilsby, descended from the two elder sisters, were disinherited, and possibly the Waddingtons, descended from the youngest sister, were entirely exiled. I want very much to discover if this last surmise is quite accurate. But what makes Sir John Tyrwhitt’s action the more puzzling is that the Drakes were then, as now, wealthy people, having in five generations secured four heiresses and co-heiresses with valuable estates. It appears to me the testator must have had a very deficient sense of justice as well as of family feelings.

In response to MLET’s query a Mr. Alger provided an accurate but somewhat unhelpful response:

Henri Waddington (8thS. xi. 428, 458). William Waddington, born at Walkeringham, Notts, in 1751, and residing at Chatham Place, London, married in 1788 the only child of Henry Sykes, of the Crescent, Blackfriars, London. Sykes was a descendant of the Pendrells of Worcestershire. Sykes and Waddington established cotton factories in France in 1792; the Revolution put an end to these, but in 1819-21 Waddington received 302,000 francs compensation. He had four sons, all born in or near London, and all eventually naturalized in France – Thomas, William Pendrell, Frederick, and Alfred. Thomas married Janet Mackintosh Chisholm, who died in 1891, and had two sons, William Henry, the numismatist and statesman, and Richard, now a member of the French Senate. J. G. Alger, FROM: Notes and Queries. June 12, 1897

Frustrated by Alger’s response MLET continued to pose the question:

WADDINGTON (8th S. xi. 428, 458, 477). MR. ALGER’S letter as to M. Waddington’s descent from Mr. Wm. Waddington, who, born in 1751, established the French factories with his father-in-law, Mr. Sykes, in 1792, is interesting, but just fails of touching my point. Had Mr. Wm, Waddington any affinity with Samuel Waddington, who married Sarah Tyrwhitt, of Stainfield, “before 1755,” the date of her brother’s will, disinheriting her to enrich distant maternal relatives [the Drakes] already wealthy? Were the French factories the result of her loss of fortune? In Mr. Augustus Hare’s ‘Memoirs of Madame Bunsen, nee Waddington,’ it is distinctly stated that the French minister’s family had intermarried with Tyrwhitts of Stainfield and Cradock of Hartforth [Hatforth], in Yorkshire, p. 23. Marmaduke Cradock married remains unanswered as to whether Margaretta Cradock had a brother, and whether that brother could have been the Mr. Wm. Waddington who married Miss Sykes and established the French factories. If MR. ALGER knows, and will tell us, I shall be greatly obliged to him.

To return to Margaretta’s Craddock-Waddington family. In 1648 Margaretta’s great X2 grandfather, Samuel Waddington, married Mary Thwaites whose father John was the last of the male Thwaites line and whose arms then devolved to his son-in-law. The following description of the (Craddock) Waddington family monuments in St Peter’s Church Leeds includes that of the Thwaites family arms:

The inscription on the brass of Edward Waddington’s tombstone is: Here lies his fathers eldest son / Whose name was Edward Waddington / Close by his grandfather John Thwaits / Both snatcht away by cruel fates / Whom God above (we hope) has blest / To live with him in endless rest./ Burled the second of Innuarie, 1674.
FROM: The registers of the parish church of Leeds, Volume 10.

Now the arms described above (Arg.-int. 3 fleurs-de-lis sable, impaling G. A inter j leopards’ heads Or) are those for the family of Thwaites that were later granted (or maybe not) to the Waddington family.

Many years later in 1869, when a relative of the ‘French Waddingtons’, the Dean of Durham Cathedral, George Waddington, died his obituary notice included the following:

The arms his family used (Argent, on a fess sable between three fleurs-delys azure, a lion passant of the field), and which are in the Durham Town Hall, are wrong. This is the coat of Thwaites (whose heiress married into the Waddington family) differenced by the lion, though it was “confirmed” to William Waddington, Esq., uncle of the Dean, in 1769. The mistake first arose in 1665 through an error of the Herald Warburton. The right arms of Waddington are : Argent, a chevron between three martlets gules (sometimes sable).

Thus the French (and other) Waddingtons adopted arms that in fact belonged to the Thwaites, another family all together, to whom they were not connected.

Another source, in discussing the Waddington Arms, points out the confusion with that of the Thwaites as follows: “One of the Waddington’s of Otterburn and Allerton Gledhow, co. York, married the heiress of John Thwaites, whose arms were arg. on a fess. betw. three fleursde-lis gu. as many bezants, and this coat was ascribed incorrectly to Waddington, his son-in-law.” From: The general armory of England, Scotland, Ireland, and Wales: …

Returning to the reference above from The life and letters of Frances Baroness Bunsen by Augustus Hare where he states that the French Waddingtons were connected to other families including the Beckwiths of Aldborough, again we should note that this is an error. The family that was connected to the Beckwiths was again the ‘Craddock Waddingtons’ . Benjamin noted below had a brother Joseph from whom Margaretta (Waddington) Craddock is descended.

Sir Roger Beckwith, 319, of Aldborough; Baronet and High Sheriff of Co. York, 1706; Mayor of Leeds in 1705; died May, 1743; he married in October 10th, 1705, Jane, daughter and heiress of Bej. Waddington of Allerton Gledhow; she died in 1713. Roger; died unmarried. Edward; died unmarried. Jane; sole heiress; married Bielby Thompson of Micklethwaite Grange, Co. York; she died at Bambirg in 1756. FROM: “The Beckwiths”

Some more on the TYRWHITTS

Sir Philip, fourth Baronet, succeeded his father at Stainfleld, in 1668, and married Penelope, daughter of Sir Erasmus de la Fountayne, of Kirby Bellers, in Lincolnshire. His lady survived him, and was his administratrix in 1688. They had three daughters and at least one son:

1, Martha; 2, Mary, who married Thomas Pelham, of Manton; and 3, Elizabeth, who married Gervase Elways, Esq., second son of Sir Gervase Elways, of Worlaby. In the time of this Sir Philip, the ancient inheritance of Kettleby passed away from the Tyrwhitts of that place, by marriage, as we have seen. The pictures of Sir Philip and his wife are preserved at Lord Petre’s, Thorndon-hall, Essex, with that of their eldest son and successor, Sir John Tyrwhitt, fifth Baronet, and three times a member of Parliament for the city of Lincoln; viz., in 1714 (1 George I.) ; in 1722 and in 1727 (1 George II.), in the place of Sir John Monson, then raised to the peerage.

Sir John married twice. His second wife was Mary, daughter of Sir William Drake, of Shardeloes, county Bucks (near Amersham). By his two marriages he had fifteen children (including Sarah who married Samuel Waddington) but none of his sons survived him, except the eldest by Mary Drake, viz., Sir John de la Fountayne Tyrwhitt, sixth Baronet, born in St. Giles’s-in-the-Fields, Middlesex, 6th March, 1707-8, who succeeded at Stainfield at his father’s death, in 1741. He represented the city of Lincoln in Parliament in 1740 (14 George II.), and died 22nd August, 1760, never having married. By his will, dated in 1755, and proved, 29th January, 1761, by his sister and sole executrix, Frances, he gave his whole landed estate to his mother’s relatives, the Drakes, who then assumed the name of Tyrwhitt, thus: “Drake Tyrwhitt.” The present generation reversed it into ” Tyrwhitt Drake.” In the next, Tyrwhitt will probably be dropped altogether.

The mother of Mary Drake (who in turn was the mother of Sarah Tyrwhitt who married Samuel Waddington) was Elizabeth Montagu and the following describes the Montagu family.