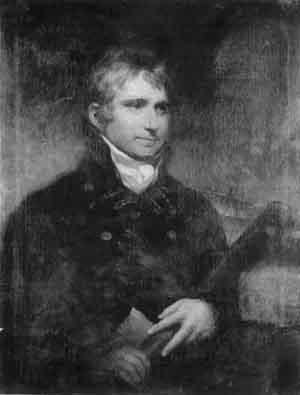 Mary Man’s father Evelyn Bradford (EB) was born 8 February 1823 in Uttar Pradesh, West Bengal, India. He was the son of Edward Bradford and his mother was a local Indian lady whose name is unknown. He married a number of times: first to a lady whose first name was Ellen and they had the following issue:

Ellen the first wife died and on 27 May 1859 EB married a lady by the name of Margaret Clementine Fell in 1859 in Calcutta, India. At some point before 1867 she too died and EB next married a widow Alice Maud Mary Rosamund  Wollun on 11 May 1867 at Fort William, Bengal, India. Alice died in June 1871 at Lucknow, Uttar Pradesh, India. They had a daughter, Norah Lillian, who was born on 3 May 1869  probably in India, and she died on 5 May 1898 in Wandsworth.

After EB retired from India and settled in England, he cohabited with a married lady by the name of Emma Bennett Bearfield (1847-1913) who became his common law wife. One of the two sons of this union was Ernest Evelyn Bradford (see obituary below). 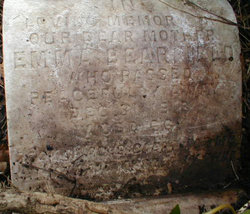 Emma’s husband Charles Bearfield was a silversmith and jeweller who had inherited his father’s jewellery business. Unfortunately, he had a not so healthy sideline of receiving stolen goods for which he was convicted and sentenced to five years in prison in 1873.

Strangely, both Emma and her husband, Charles Bearfield, were living with Evelyn Bradford in the 1881 census after Charles had been released from prison, along with Emma and Evelyn’s sons: Ernest and William (although he is named Henry in other places). One has to wonder what the household must have been like. Emma is listed as as having a last name Barefield and as Evelyn’s “sister”.

Emma had a brother William Bennett. Emma and William’s father was Ernest Bennett who was a professor of classics at Charterhouse School and had no connection to India or the Bradford family, other than his daughter’s.

Emma married Charles Bearfield in 1865 and they had three children and the two that survived infancy were living separately from Evelyn/Emma/Charles in the 1881 census, being raised by Emma’s parents and an aunt.

Evelyn Bradford’s will names his and Emma’s, sons Henry (William on the census?) and Ernest and daughters Margaret and Mary [Man] as beneficiaries. Emma died in 1913 and in her will she only lists her children from Bearfield. So far she can’t be found on the 1891 or 1901 census, but she must be living separately from both Bradford (in London) and Charles Bearfield (in Worcester by this time) as they both appear without her. Its all very curious. Charles has a sister who lead a very respectable life — Clara Bearfield Warren was the sister of Charles Bearfield Jr, [Based on an email from Lori W.]

The Bradford Family and India

Mary (Bradford) Man’s grandfather was Edward Chapman Bradford who was a Master of Trinity House. A law case involving Edward can be read here.(<— 6 page pdf)

Below right John Yardley Bradford by Arthur William Devis in the Uniform of the 21st Bengal Native Infantry with Taj Mahal Beyond (1808) and his memorial left.

The East Indian warriors who served John Company [The East India Company] may be counted upon the fingers. On Friday last the grave closed over Major General Evelyn Bradford, who first saw service in the old 14th Native Bengal Infantry about the time when Pollack, “the avenger”, was retrieving the Elphinstone fiasco. He served at one time as aide-de-camp to Lord Harding and saw fighting on the North-West frontier in the first Sikh War; he had a look in at Goojerant in the second [Sikh War] and had two years of campaigning in the Mutiny. On transference to the service of the Crown, like the rest of his conferees of John Company, he completed his time in India and retired in 1885. He was born 1823; his father was Lieutenant Edward Bradford E.I.C., elder brother of the Lieut. General Sir John Fowler Bradford K.C.B. who subsequently commanded the Murset Division during and after the Mutiny. [A letter to the Times that mentions the action of General Bradford in India can be read here in pdf —> Letter to the Times.]

General Sir John Fowler Bradford was born in London on 28 February 1805, a son to the late Captain Edward Chapman Bradford of the Honourable East India Company.

On 5 May 1821, Bradford was posted as a Cornet to the 1st Light Cavalry. He arrived in India in September of that year, following which he served as Instructor and Quarter Master (6 October 1825-13 March 1832). After a furlough from 26 January 1837-10 May 1840, Bradford returned to India, where he fought in several engagements in the First Afghan War (October 1842-October 1843) leading to the re-occupation of Kabul. He also served in the Gwalior Campaign at the battle of Maharajpoor (December 1843).

At the battle of Aliwal, during the First Sikh War (18 December 1845-22 February 1846), Bradford commanded the 1st Light Cavalry in the famous charge with the 16th Lancers. The cavalry broke directly through an enemy square and routed the Sikh army, but at a high price. Bradford’s regiment lost 9 men and some 23 horses. For the manner they contended for the glorious prize of victory, the 1st Light Cavalry under the command of Major Bradford received an honourable mention in the Dispatch of Major-General Sir Harry Smith, the Commander-in-Chief. In the Second Sikh War (7 September 1848-14 March 1849) Bradford again distinguished himself in the battles of Chilianwala and Goojerat. He was mentioned ‘with great approbation’ in the Dispatch of Major-General Sir Joseph Thackwell, Commander-in-Chief of the Cavalry Division.

For his gallant service in the Sikh Wars, Bradford was appointed a Companion of the Bath on 9 June 1849. On 20 May 1871 he was promoted to Knight Commander of the Bath. He retired from active service on 31 December 1877 with the rank of General.

The medals shown below were awarded to John Fowler Bradford and consist of: 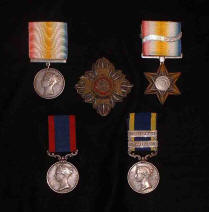 Below obituary of Sir John Bradford In the Times April 15 1889. 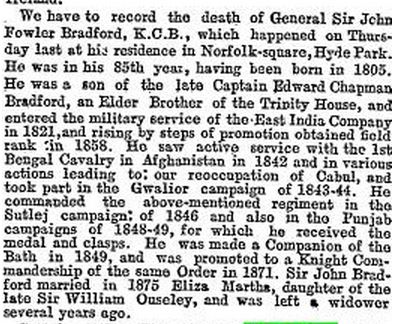 Located on the internet the following snippet:

The Hardinge family appears here on the Man family web site as a result of a connection through marriage of Mary Bradford to George Octavius Man. At some point in April 1785 or thereabouts Kenneth Callander married Harriet Bradford (Mary (Bradford) Man’s great great aunt) and subsequent to that marriage there were three daughters.

The eldest was called Harriet Fordyce Callander. She married Captain William Menzies of the Hon East India Company (whose father was Solicitor to HM Customs in Edinburgh)  and they had four children.  There are frequent references to the Hardinges in the Menzies family where Hardinges were appointed as Executors and also legatees to various aunts and cousins, etc.

Some members of the Harding family have achieved public recognition and below we have listed some of these. In [ ] after each name we have described the relationship of the Hardinge listed below to the brothers Charles and Richard Harding (above).