William Man was born in 1778 at Reading, Berkshire, the second son of John and Sarah (Baker) Man, and was baptized on 17 June at St Mary the Virgin, Reading.

He married Elizabeth Marchant on 27 February 1861 at the Register’s Office, Ventnor, Isle of Wight.

William died on 23 May 1874 at Prospect Street, Reading and was buried on 29 May at the Reading Cemetery. 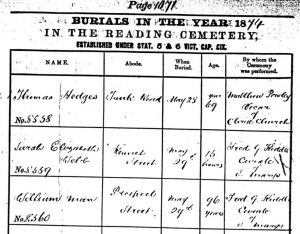 He left a WILL [<— in PDF].  Elizabeth was born in the second quarter of the year 1839 in the parish of St. George-the-Martyr, Southwark, Surrey. She died in the September quarter of 1929 aged 90 years in Christchurch, Hampshire.

In 1874 William’s widow remarried a William Agnew Martel, for details on this Martel marriage see the end of this page.

In 1807 William went into partnership with John Snare to form the publishing company Snare and Man of Reading. He also appears for a few years in Piggot’s Directory for Berkshire.  Snare and Man published the following:

This is the spot in Reading Cemetery where William Man is buried.  As can be seen, there is no gravestone or other marking to indicate this fact, although his name appears on the index of graves which clearly indicates this to be the spot.  The cross to the right of where William is buried is the grave of Charles Marchant, William’s brother-in-law.

William was still agent for the Globe Insurance Co in 1827.

According to the Reading Library and Museum Committee’s minutes John Man’s ‘Anecdotes’ and ‘the three original copper plates for illustrating The Stranger’ were donated in September 1902 by one C. B. Stevens. And in 1931 a plain ‘Stevens’ gave three prints from ‘The Stranger’. One would expect William, having described the Anecdotes as a ‘family relique’, to have tried to keep it in the family, but no relationship between the Man family and the Stevenses has been found.  A Dr. Joseph Stevens was first curator of the museum (1884), and George Stevens published directories in the 1880s and 90s. (communicated to the web site by Adam Sowan – Reading historian). The plates and prints were thought lost but a recent (2015) communication from the Reading Museum shows they are still among the Museum’s collection and have the   object numbers: 1931.134.1=6. The prints where recorded as given in 1931 by C B Stevens – and so probably the same man that gave the plates in 1902.

The following letter was written by William Man, son of John Man, to Edward Garnet Man. William and Edward would have been first cousins one generation removed; William being the first cousin of Edward’s father Harry Stoe Man.

In this letter, William’s recollections are somewhat accurate, however his claims about Admiral Balchen are not since NO relationship, at least not nearly as close as William states, has been established between the Admiral’s family and the London Balchen family of William’s grandmother Mary (Balchen) Man.  The journal mentioned by William and kept by James Balchen (NOT a Sir) can be found here.  James Balchen was Mary Balchen’s brother and therefore William’s great uncle and he certainly was neither a brother nor a son of the admiral’s.  To explain the family’s mis-conception that they were related to the Admiral when in fact they were not can be found HERE.  In the letter, ‘My cousin Ann’ refers to Eleanor Ann Rankin Man daughter of Henry Man. The grandfather William speaks of who dies in Wales is John Man. Images of the original two page letter can be found at the end of this page.

Dear Sir  In reply to your letter received this morning being a total stranger to me, I find many incidents contained in it correct.  I am uncertain whether my grandfather, who was a builder, and built many houses in that neighborhood, among others my father pointed one out to me then occupied by the Misses Dolbys built by him at Hurst. I formerly had an itinery written by Sir James Balchen, brother or son of the Admiral who was lost with his ship, of his journey to Hurst to pay a visit to his new relation Mr. Man and his wife, but whether senior or junior I have forgotten. I remember my father saying what a sever blow it was to his family the news of his Uncle Balchen the Admirals loss my Grandmother [Mary Balchen] being the Admiral’s sister.  I heard my father say he himself was born in Goodman’s Fields (where probably my Grandfather lived) if so our Great Grandfather might have lived at Hurst.  Further than this I know not. My Grandfather as you observed died in Wales.  I believe at Cardiff.  I have no knowledge of my Grandfather or Great Grandfather having lived in Cornwall.  The itinery I mentioned still exists in the Man family. My cousin Ann, who you call Aunt, has made to me the same inquiries you are now making, who is now living at Halstead, Kent, with no better success.

Perhaps if you could find the year of the death of our Great Grandfather by searching his will at Doctors’ Commons, it might lead to something further.