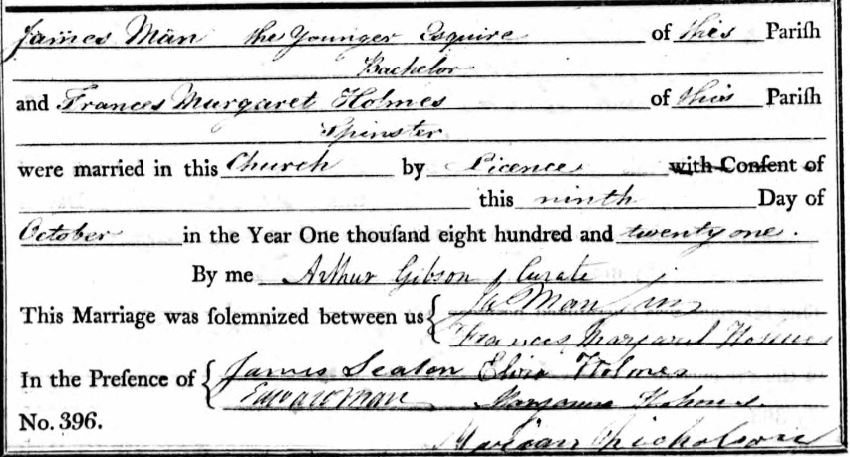 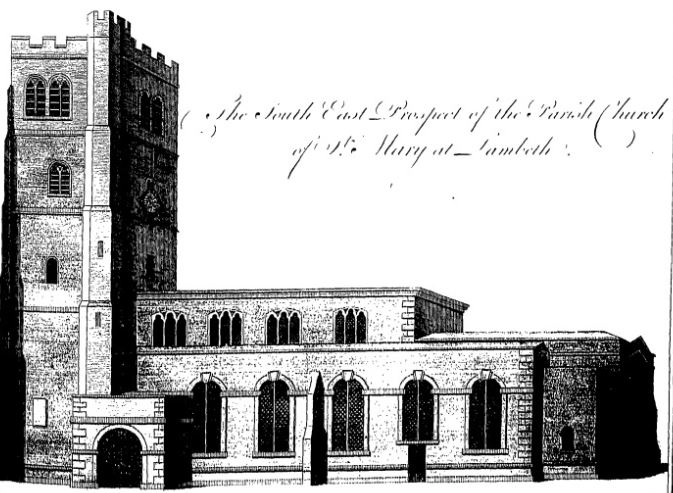 Frances Margaret Holmes was born on 17 October 1799 in Westminster, Middlesex, the older daughter of Daniel and Elizabeth Catherine Holmes, and was baptized on 17 April 1805 at St Paul Covent Garden, Westminster.

NOTES: James’s brother Edward was a witness at his marriage. So also were Eliz. Holmes and Maryanne Holmes (Frances’s mother and sister). James would have been 38 at marriage; Frances 22. Below, a transcription of the 1851 census:

Edward Man (James’ brother) became a partner in the firm with his father in 1805.  The company at that point was called James Man and Son.  James, Jun.  became a partner in his father’s and brother’s brokerage firm in 1808 at which point the firm became known as James Man and Sons.  In 1819 by agreement among James and his sons the company became known as Edward and James Man.

(Up until 1870 the law required that the name of a partnership had to list all the partners).  By 1870 the firm was known as E. D. & F. Man standing for the two brothers Edward Desborough and Frederick and has remained the same name until the company split and the financial publicly traded company became The Man Group. The commodity trading company retained E. D & F. Man as its name.

Occasionally ‘The Mans’ were involved in legal disputes such as the following found in Reports of Cases Argued and Determined in the English Courts of Law …, Volume 5: 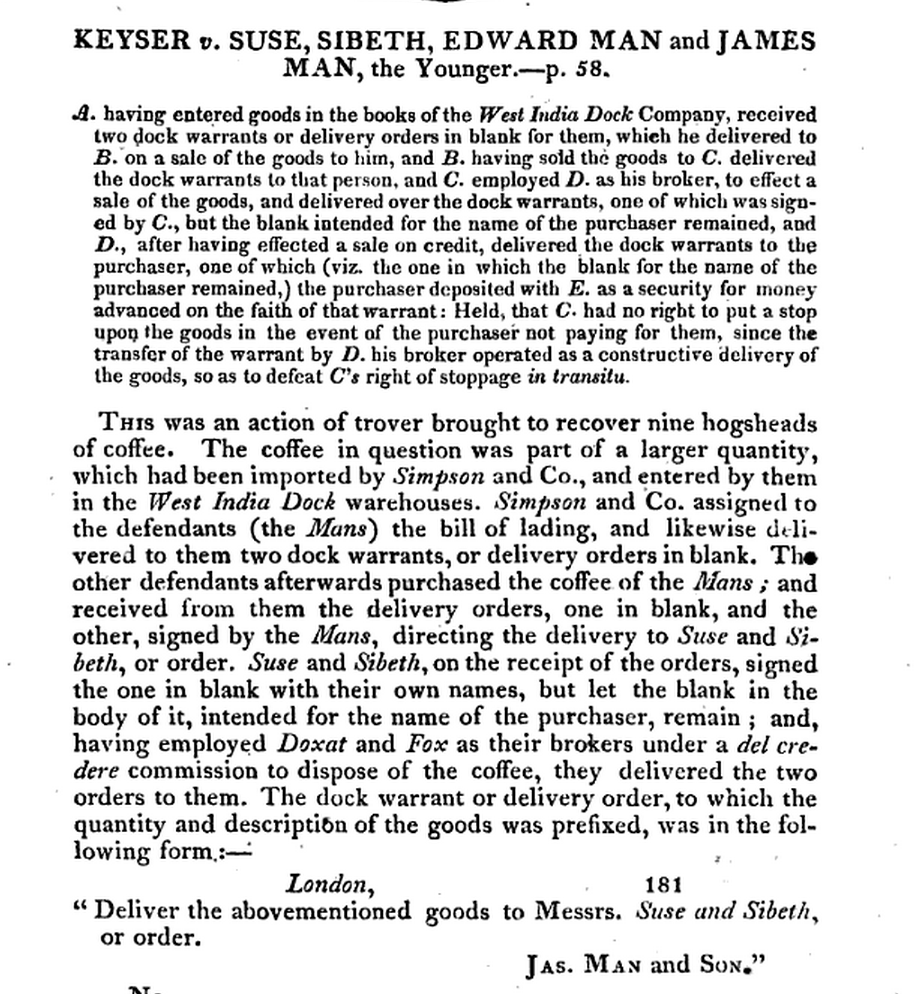 The partnership of Edward and James Man, Jun. was dissolved in 1827 when James Man started his own business as a wholesale ironmonger and copper nail manufacturer with premises in Brick Hill Lane off upper Thames Street. (see House of Man, p. 51). However James was not as successful at business as his brother Edward was as the following notices testify:

The following notice appeared in The Gazette (London): 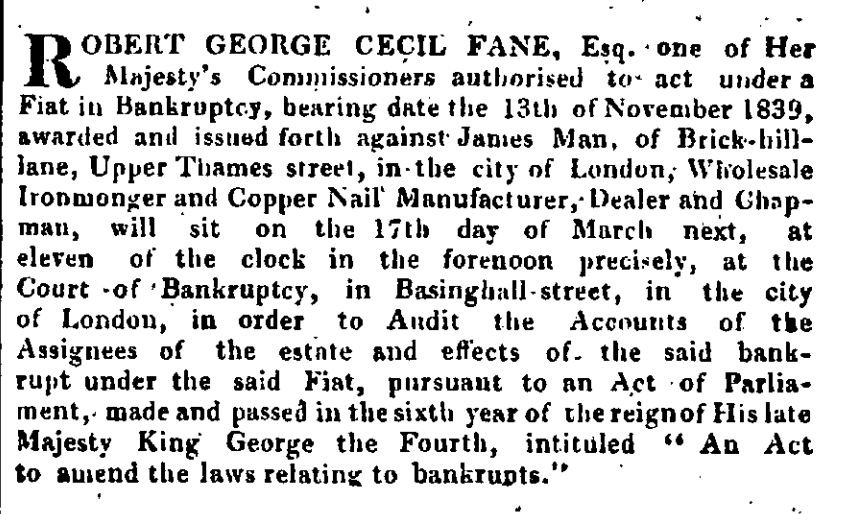 But James appears to have weathered his financial difficulties: 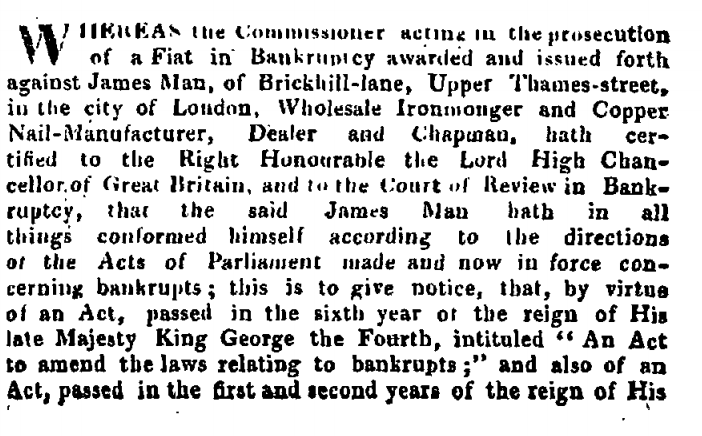 Below is the death notice for James in The Times of 8 March 1842.

After his death James was still embroiled in a court case as follows:

(Adapted from The English Reports Volume 4.)

This bill was filed by James Man, the creditors’ assignee, and George Lackington. the official assignee, of a bankrupt. James Man died in March 1842, leaving Lackington surviving him, and a decree was made in the cause on the 22d of February 1844.

In March 1844, after the decree had been pronounced, but before it had been entered, Lackington, the official assignee, who was then the sole Plaintiff, died, and on the 2d of April 1844 William Turquand was appointed official assignee in room of Lackington.

A motion was now made that the name of Turquand might be henceforth substituted in the place of Man and Lackington, or of Lackington, in all further proceedings in these causes, in the same manner as if Turquand had been originally a party thereto.

Mr. Hallett, in support of the motion.

Mr. Kent, contra, for the Defendant T. B. Ricketts, objected to the form of the notice of motion, it not stating on whose behalf the motion was made, and contended that this section did not apply to the present case, and that a supplemental bill was necessary.

The Master Of The Rolls [Lord Langdale]. I think that the Vice-Chancellor of England has made orders of this description, and I will take an opportunity of looking at them.

The Act provides that the estate shall vest in the new assignee, and that the new assignee may be substituted by “suggestion.” I should have felt some difficulty as to the proper mode of giving operation to the direction as to the suggestion, but for the orders of the Vice-Chancellor of England.

The Master Of The Rolls ordered the name of Turquand to be substituted in the place of Lackington deceased as a Plaintiff in the suit; and that the suit should be prosecuted in the same manner as if Lackington had been originally a Plaintiff therein.

In Edward Garnet Man’s (EGM) school boy diary Vol. 1 written in 1850-1851 the following entry can be found: ‘September 27 1851, had a letter from Miss Frances Man with an invitation for Monday. Wrote to say we could not come.’ And later on in the diary Edward writes: ‘Miss Frances Man staying at Mrs. Laurence, Lee Grove, Blackheath’. What is puzzling is that no ‘Miss Frances Man’ alive in 1851 presents herself as an obvious candidate for this reference. However Ed Man has pieced together the following which shows that this Miss Frances Man was to the wife of James Man.

So! From these 11 pieces above put together by Ed Man, what conclusion can be drawn about Frances Man mentioned in EGM’s schoolboy diary?

Therefore ‘Miss Frances Man’ mentioned in Edward Garnet Man’s diary is James’s widow (he died in 1839 at Penzance). She would have been about 70 in 1851, but we know from Mary Awdry’s letter that she lived to an old age. Mary was born in Kennington in 1852 so would have known her as a young girl.