On June 22 2002 Will and Joyce celebrated their Diamond Wedding Anniversary. The wedding picture below shows from left to right: Gordon Man (best man), Will, Joyce, Dorrie Sprinthall (Joyce’s sister) & Mary Man. See also below is a message from the Queen sent on the occasion of the Golden Anniversary. 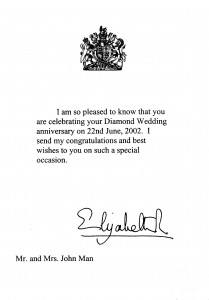