Donald Verner Taylor was born on 2 July 1909, the son of Charles William and Florence Edith (Man) Taylor. He died on 5 December 1979.

Donald and Constance had one child:

Donald married (2) Hilda Joyce Read on 10 December 1946 at the Record Office, Wantage, Berkshire. She was born on 10 August 1910. They were divorced. Joyce was living at the Royal Cambridge Home, Surrey in the early 2000s but is probably deceased.

Donald and Hilda had one child:

Donald next married Sheila Engh about 1972. They had no children. (see obituary below or click HERE for the pdf).

Dentistry, the armed forces, sport, the law, international affairs and commerce were all spheres in which Donald Taylor, who died on December 5, 1979, left his very distinctive mark. Few members of the dental profession in recent times can have given such useful service to it in such varied ways.

Born in 1909 in Derby, Donald Taylor was educated there and at Manchester University where he qualified in dentistry in 1930. After a short appointment at Birmingham Dental Hospital he entered the school dental service in 1932, but left this in 1936 to take a commission in The Army Dental Corps. The rapid expansion of the Corps in the 1939-45 War brought him early promotion and he found himself in charge of the dental services in Malta when the long blockade and siege, for which the island was subsequently awarded the George Cross, took place.

His experience during this period directed his talents towards oral surgery and on his return to England he elected to enlarge this experience by serving under Sir Hugh Cairns at Oxford while at the same time pursuing studies for the Edinburgh higher dental diploma. Success in this was followed by working for the newly-introduced fellowship in dental surgery of the Royal College of Surgeons of England and he was one of the first small group of fellows to be admitted by examination in 1948. In that year he was appointed consultant in dental surgery and several overseas postings ensued. In 1958 Colonel Taylor was appointed consulting dental surgeon to the army and, being based in London, he saw the opportunity to fulfil his long-held ambition of reading law. He was called to the Bar at Lincoln’s Inn in 1961. In 1959 he was promoted brigadier, was appointed Queen’s Honorary Dental Surgeon in 1961-a post he held until retiring from the army in 1967- and he was awarded the C.B.E. in the Birthday Honours List of 1963.

The story so far is that of a career that would have satisfied most people but Donald Taylor was not one to rest on his laurels. Since 1963 he had been serving as a representative of the Ministry of Defence on several specialist British Standards Institution committees dealing with dental materials and so had gained an insight into the manufacturing and distribution aspects of dental supplies. He was therefore well equipped for the post of professional consultant with A.D. International which he accepted in 1967. His 10 years’ service in that capacity was undoubtedly a major factor in the development of a greater understanding between the profession and the dental trade.

His involvement with standards extended into the international field and he took the chair at a meeting of the European Standards Committee on Dental Products in Utrecht in 1978. He had a particular interest in terminology and was chairman of the B.S.I. committee which prepared the ‘Glossary of Terms relating to Dentistry’ in 1970. His legal training contributed another facet to his work for he wrote a series of articles on ‘The Law and the Dentist’ for the BRITISH DENTAL JOURNAL in 1963 and he lectured on dental jurisprudence at several dental schools.

As someone who seemed to achieve pre-eminence in everything he did, it is not surprising that in his chosen sport of lawn tennis Donald Taylor should have played for his university, his county of Derbyshire and for the army. His colleagues and friends will remember him for his directness, his loyalty, his firmness when required and for his rich sense of humour, evinced by a twinkle in his eye and a soft, deep-throated chuckle.

We mourn the loss from our profession of one of its leading members of the postwar years and very many will join in extending deepest sympathy to Sheila, his widow, and to his son, Michael, now serving with NATO in America. 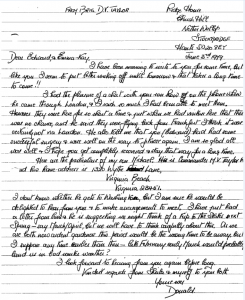