Florence died on 29 January 1928 at Southside, South Avenue, Littleover, Derbyshire and was buried on 2 February at Uttoxeter Road Cemetery, Derby.

NOTE: A record of the announcement of the birth of Florence in the Argosy newspaper, a local British Guiana newspaper for January 1881 has been found. The announcement runs:  ‘On the 12th inst. at Vergnoegen West Coast the wife of James H. Man of a daughter’.  Later on the descendants of this family marry into British royalty….

Below, The Taylor family on the 1911 census: 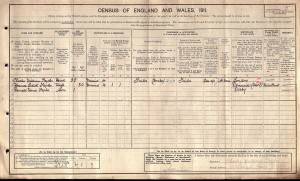 Charles William Taylor has been found along with his father Robert Verner Taylor and mother on the 1901 census. Charles’ profession is shown as a violinist: 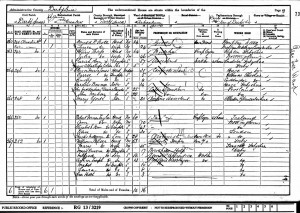 Below, the probate record for Robert Verner Taylor the father of Donald: