James Henry Man was born on 9 April 1851 at 17 Spencer Place, North Brixton, Kennington, Lambeth, Surrey, the son of Edward Desborough and Louisa Mary (Harris) Man and was baptized 14 May at St Mark, Kennington. 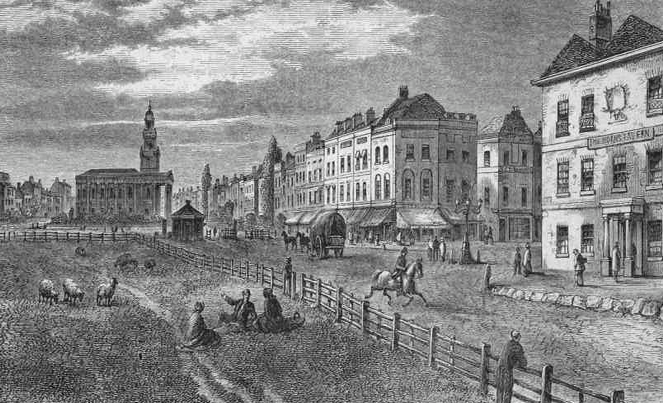 He married Sarah Frances (Fanny) Huntley on 25 August 1874 at St. Andrew’s, Litchurch, Derby. Below is James’ application to get married which is signed by him and dated 12 August 1874. 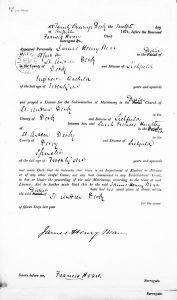 Sarah Frances died on 26 July 1922 at 124 Rosehill Street in Derby and was buried on 29 July at Uttoxeter Road Cemetery, Derby. 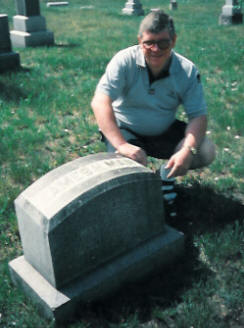 Steve Man at the gravestone of James Henry Man

James worked as a mechanical engineer for G. H. Fletcher & Co. which was based in Derby and had offices near to ED and F Man in Mincing Lane, London. He travelled among various sugar plantations on the north coast of South America servicing and maintaining Fletcher’s machinery used to crush the sugar cane. The advertisement below appeared in a publication from 1917, long after James’s association with the company. 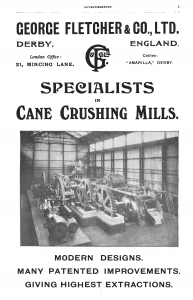 Notes: James published a number of engineering articles, such as in The Engineering and Mining Journal: Description of automatic valve cut off patent (<– PDF). An article he wrote titled Cane Mills and Megass as Fuel was published in The Sugar Cane magazine in 1884.

Sometime toward the end of the 1880s James contracted Tuberculosis and so he took himself and his family away from the tropical heat of South America  to Denver in order to benefit from the clean clear air of that city. However he eventually succumbed to that disease.

He resided at 1020 31st Street as the following Denver City directory indicates:

Below is a map of Riverside Cemetery in Denver indicating the location of James’s grave which is roughly in the middle of plot 22. The cemetery is vast and such a map is needed if one is on foot and trying to find the grave. 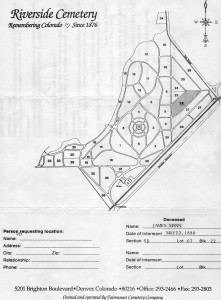 After James died in Denver, Sarah returned with her five children to England. The children ranged in age from 13 years to 2 months. The family settled at Clifton Road, Ashbourne, Derbyshire, near to where Sarah’s parents, George Maxwell and Sarah Ann Huntley, were living. Below is the 1891 Census showing Sarah aged 40 a widow, with her five children:  John H. Man (16): Charles F. Man (14); Florence E. Man (10); Alice H. Man (8); and Edward M. Man (3):

Sarah and her family also appear on the 1901 Census below:

Investigations of the Argosy newspaper of British Guyana, which began publication on October 2 1880, and undertaken by Stephen Man have revealed the following items on James Henry.

1. May 27 1882 – The Harbour section – the following is noted:- Passengers Sailed on 25th inst. per RMS Solent for Southampton Mr. & Mrs. J. H. Man and three children. [NOTE the RMS Solent seemed to arrive and depart almost every week so it must have sailed to somewhere in the Caribbean where people picked up another ship for the main leg of the voyage. In other words it was a feeder vessel].

“The news of the death of Mr. James Man was received by his many friends here with deep regret. He was Consulting Engineer for several of the Sugar Estates on this coast and he was a favourite with everyone. It was a great surprise when his health suddenly broke down a few years ago, as before then he was such a fine strong looking man. It turned out that he had the seeds of a chest complaint in him, and the worry he underwent in working out an invention caused them to developed. (sic) He was sent to Denver Colorado as the climate there was supposed to be the best in the world for his complaint and he lived there in tolerably good health for a few years. The invention to which he gave up his life was that of an Automatic Cut Off Steam Slide Valve. He had almost perfected it before he left here and he disposed of his share of his patent rights to a firm in Denver which he joined as a partner. In death his inventive genius has been lost to the engineering world.”

Another article  appeared in The Argosy remembering James Henry Man:

“Our Essequebo correspondent refers in becoming eulogy to the late Mr. Man, engineer, formerly of the Colony whose death in Denver Colorado is now announced. Mr. Man’s invention of a new cane mill which was fully described in our columns aroused the interest of several large houses and there are now, on their way to Denver, letters which reached us from Europe, Cuba and other quarters asking for information with a view to adoption of Mr. Man’s patent.”

Voyages to and from British Guiana (BG) by the Mans

Based on the baptism of Charles Francis Man in Derby in June 1877 and the arrival listed next.

Speculation is that Sarah Frances’s parents (George Maxwell and Sarah Ann Huntley along with Sarah’s sister, Emily, came to BG to ascertain whether their daughter should follow her husband to BG and, if so, find a suitable place for them to live.

Jun 1879 – arrival of Mr. Mann  I tend to ignore this entry as not being James Henry. To have been James Henry, he either would have had to return to England with the Huntleys or not have gone to BG before this date. In either case, you would have expected him to sail with his family to BG.

The three children would have been the two boys born in England and Florence Edith, born in BG in Jan 1881. (Sarah would have been pregnant with Alice Hilda at this time.)

Assumed – James and Sarah would have returned to BG with their three children before November 1882, when Alice Edith was born in BG.

Which two children accompanied them back to England? I would guess that it was either the two boys or the two girls. Since it is later reported that Mrs. J. Man and two children left BG in Jan 1884 (without servants), I would conclude that on this trip it was the two infant girls with the servants to help.

Jan 1884 – Mrs. J. Man and two children. This time it would have been the two older boys traveling with their mother without servants.

By December 1883, James Henry is in Denver, Colorado. [Based on an article by James Henry entitled “The Theory of Burning Green Megrass,” signed and dated by him on Dec 27th,1883.]

I have a copy of a letter (provided by Steve Man) written by Horace Man to Tim Dumas in 1968 stating that his father (John Huntley) had made the trip to the Sates twice before James Henry died. It is conceivable that James Henry took the two boys with him when he went to Colorado in 1883, then returned to England in 1884 to gather his whole family together and return to Colorado.

On the other hand, James could have gone to the States by himself first and then returned to take his family back with him. If this was the case, then I don’t know what the occasion would have been that would have given rise to two crossings by the boys.

Below, Sarah Frances Man’s death notice as it appeared in the parish magazine of St. James, Derby.

THIS IS THE LAST WILL AND TESTAMENT of me SARAH FRANCES MAN of No.124 Rosehill Street Derby Widow I bequeath my mahogany bureau to my son Charles Francis Man absolutely I bequeath my jewellery and trinkets equally between my daughters Alice Hilda Man and Florence Edith Taylor absolutely 1 give my househo1d furniture (other than the aforesaid bureau) and all other my household effects to the said Alice Hilda Man for her life or until she shall marry and upon her marriage or death whichever shall first happen I direct that the same shall be sold and the net proceeds equally divided between all my children who shall then be living I give the balance of any cash after payment of my funeral and testamentary expenses and debt, to the said Alice Hilda Man absolutely And I appoint her and the said Florence Edith Taylor to be the EXECUTORS hereof IN WITNESS whereof I have hereto set my hand this thirteenth day of July one thousand nine hundred and twelve. SARAH FRANCES MAN

THIS IS A CODICIL to my Last Will before written WHEREAS by my said wi1l I have given my household furniture and all other my household effects (not therein specifically bequeathed) to my daughter Alice Hilda Man for her life or until she should marry Now I DECLARE that instead of such limited interest it is my will that my said daughter shall take and enjoy the same as her absolute property And in all other respects I confirm my said will IN WITNESS whereof I have hereunto set my hand this 18th day of February one thousand nine hundred and fifteen.

SIGNED by the testatrix as a codicil to her last will in the presence of us both being present at the same time who at her request in her present [sic] and in the presence of each other have hereunto subscribed our names as witnesses.

Below are some images of James’s grave taken in 2016 by the editor of this website. The fact that his widow Sarah chose not to follow the usual convention of placing just two dates (birth to death) but rather to state James’s actual age at death (‘aged 36 years’) would suggest that she chose to emphasize how young James was when he died. 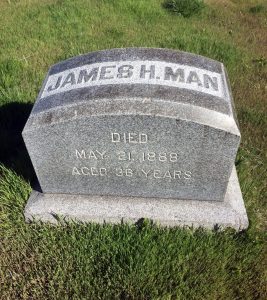 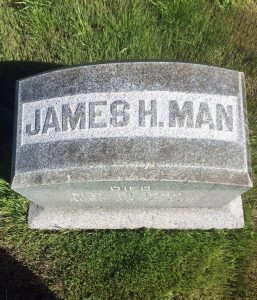 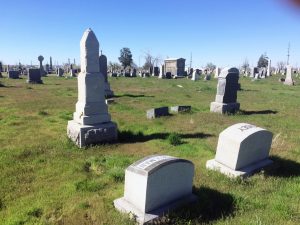