Edward Desborough Man was born on 20 May 1814 at 18 Chester Place, Kennington, Lambeth, Surrey, the eldest son of Edward and Georgiana (Desborough) Man, and was baptized 2 September 1814 at St. Mary-at-Lambeth, Lambeth, Surrey.

Edward died on 9 August 1893 at 42 Marina, St. Leonards-on-Sea, Sussex and was buried on 12 August at Hastings Borough Cemetery, The Ridge, Hastings, Sussex. He left a will (see below). 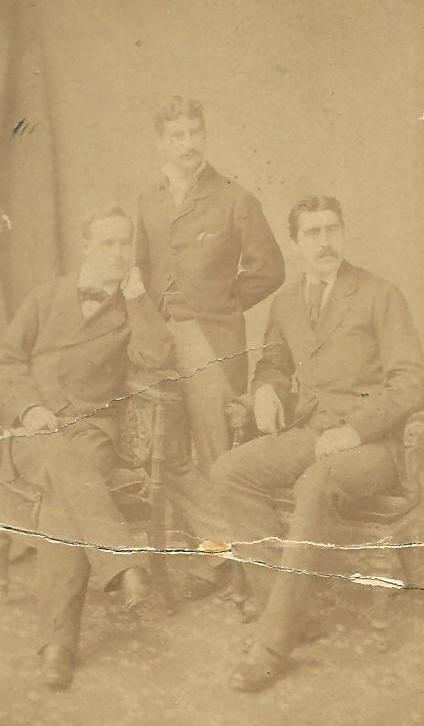 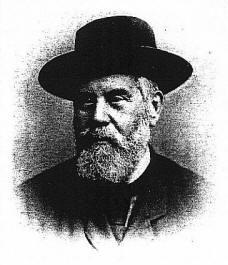 Edward has been found on the 1841 census residing at Kingswood Place, South Lambeth in Surrey, along with his sisters Georgiana and Julia and brothers Frederick and James: 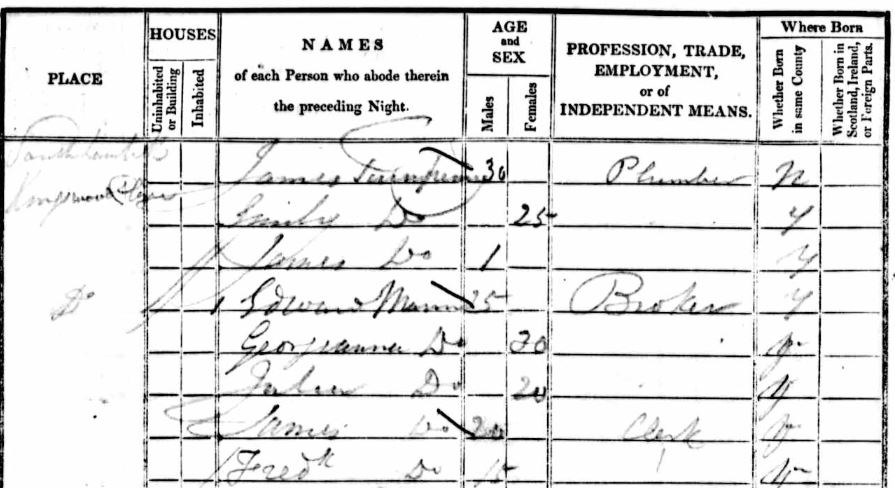 A search of the 1851 census has so far failed to turn up Edward and his family. Edward has been found on the 1861 census residing at Streatham /Upper Tooting in Surrey with wife Louisa Mary, son James Henry, daughter Mary Louisa and unmarried sister Georgiana (see below).

On the 1891 census Edward is shown as a lodger at No. 72 Marina with his daughter, Mary L(ouisa), who will marry Rev. Vere Awdry in October of that year. His niece, (Louisa) Jane H(ingston) Kirkness, is a visitor. Edward D. Man died in 1893 at which time he was living at No. 42 Marina. Mary A. Desborough, his cousin, was in attendance. She was probably the daughter of Capt. Lawrence & Maria Aletta Cameron Desborough, born in India in 1837. EDM’s grave at Hastings cemetery no longer exists. 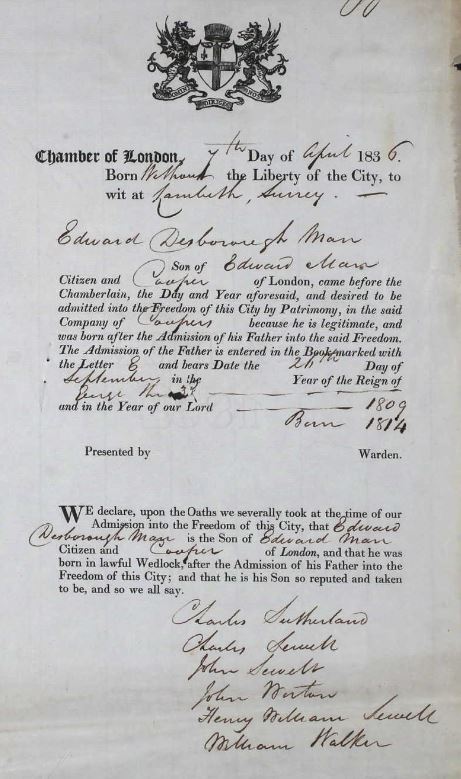 EDM’s Freedom of the City of London

The company E. D. and F. Man bears his initials and those of his brother Frederick. A summary of the history of the MAN group founded by Edward Desborough and his brother can be found on the Man Group web site HERE. An article describing the Man Group appeared in a hedge fund magazine in February 2011 and can be read HERE. A two page history of ED and F Man was written in 2000 for the journal West Africa and can be accessed HERE (<— two pages PDF). Below the company’s logo today. 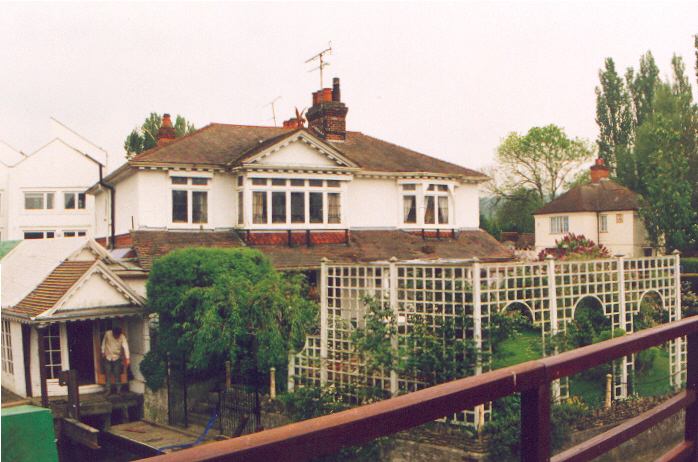 Thames Cottage, the home of EDM

It is not certain that this picture below is of the wife of Edward Desborough Man, but the original is inscribed ‘Louisa Man’ which may also refer to EDM’s sister Louisa Emma Man. However it is more than likely that this is Louisa Mary Man. 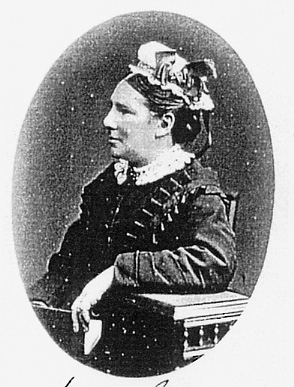 The view up river from Thames House, showing All Saints where Louisa Mary (Harris) Man is buried. 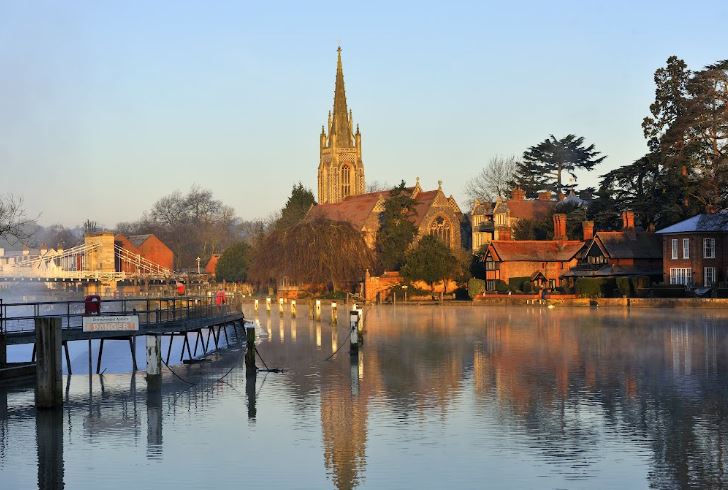 All Saints, Marlow where Louisa Mary (Harris) Man is buried

At the National Archives is a release of interest and claim by Edward Desborough Man of Mincing Lane, London, merchant to the estate at Binfield devised to him by the will of Anna Maria Man. The estate comprised 6 cottages, coppices and 2a. of newly enclosed land. D/EX 491/38 1886. 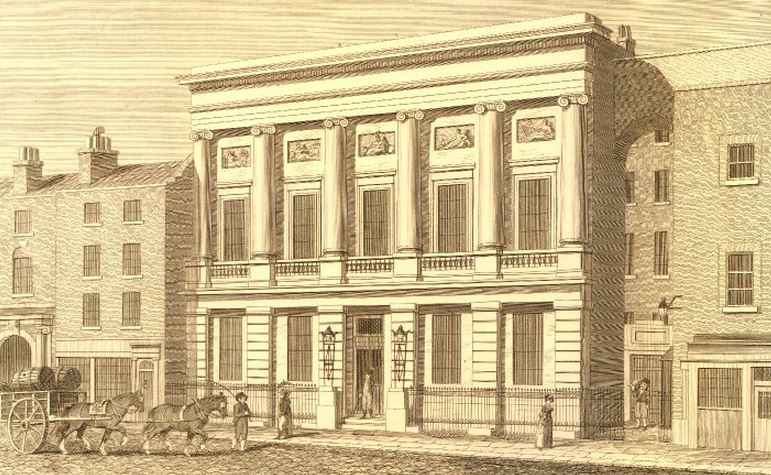 Transcript of the Will of Louisa Mary Man, 1861 This is the last Will and Testament of me Louisa Mary Man the wife of Edward Desborough Man of Upper Tooting in the County of Surrey, Esquire.  Whereas under the settlement made in contemplation of my marriage with my said husband by Indenture dated the twenty seventh day of January one thousand eight hundred and forty nine, I have a general power by my Will or any Codicil thereto of appointing certain monies stocks funds and securities thereby settled now in exercise of the said power given to me by the said settlement and of every other power hereunto enabling me.  I first the said monies stocks funds and securities to be paid or transferred to my brothers-in-law James Lawrence Man and Frederick Man to be held by them upon the trusts and to and for the intents and purposes hereinafter declared concerning the same, that is to say upon trust for my daughter Mary Louisa Man to vest in her on her attaining the age of twenty one years or on her marriage and in case of my decease before the said Mary Louisa Man shall attain her age of twenty one years or shall marry, then upon trust either to permit the said trust funds to remain in their present state of investment or with the consent of my said husband during his life and after his decease in the discretion of the trustees or trustee for the time being of this my Will, to convert or sell the same or any part thereof and to invest the monies to arise from such conversion or sale in any of the public stocks or funds of Great Britain or upon government or real or leasehold securities in England, Wales or Ireland or in the stocks shares or securities of any company incorporated by Act of Parliament and paying a dividend or of any foreign government with power to vary the same or any part thereof for any other investment of the description aforesaid.  And to apply the income to arise from such investments or any part thereof for or towards the maintenance or ….or otherwise for the benefit of the said Mary Louisa Man and during such suspense of absolute vesting accumulate the residue (if any) thereof in the way of compound interest by investing the same and the resulting income thereof in and upon such stocks funds shares or securities as are herein before mentioned for the benefit of the said Mary Louisa Man.  And in case my said daughter shall not live to attain the age of twenty one years or marry then from and after her decease upon trust to pay the whole of the said trust fund and the accumulations if any made by virtue of the power lastly herein before contained to the said Edward Desborough Man for his absolute use and benefit.  And I hereby declare that if the said trustees hereby appointed or either of them shall die in my lifetime or if they or either of them or any trustee or trustees to be appointed as herein after is provided shall after my death die or desire to be discharged or refuse or become incapable to act then and so after the said trustees or trustee may appoint a new trustee or new trustees in the place of the trustee or trustees so dying or desiring to be discharged or refusing or becoming incapable to act.  And upon each such appointment the said trust premises shall be so transferred that the same may become vested in the new trustee or trustees jointly with the surviving or continuing trustee or solely as the case may require and every such new trustee shall (as well as before as after the said trust promises shall have become so vested) have the same powers authorities and discretions as if he had been appointed a trustee.  And I declare that the trustees for the time being of this my Will shall respectively be chargeable only with such monies as they respectively shall actually receive and shall not be answerable for each other or for the any banker broker or any other person in whose hands any of the trust monies shall be placed nor for the insufficiency or deficiency of any stocks funds shares or securities nor otherwise for involuntary losses.  And that the said trustees for the time being may respectively reimburse themselves out of the trust premises all expenses involved in or about the execution of the aforesaid trusts and powers.  And I appoint the said James Lawrence Man and Frederick Man Executors and Trustees of this my Will.  In witness whereof I the said Louisa Mary Man the testatrix have to this my last Will and Testament set my hand this seventeenth day of June in the year of out Lord one thousand eight hundred and sixty three  — Louisa Mary Man  — Signed and declared by the said Louisa Mary Man the testatrix as her last Will and Testament of us present at the same time who at her presence and in the presence of each other have subscribed our names as witnesses —  Fred: Man of Mincing Lane, —  William Rochell of Great Marlow. Proved at London 7th September 1874 by the oath of Frederick Man one of the Executors to whom Admon was granted limited to all such personal estate and effects as the deceased by virtue of a certain Indenture bearing date the 27th January 1849 and of all powers and authorities her enabling had a right to appoint or dispose of and has in and by her Will appointed or disposed of accordingly but no further or otherwise Power reserved of making the like grant to James Lawrence Man the other Executor.