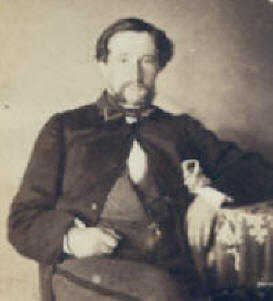 Septimus Man was born on 8 April 1839 at Halstead Hall, Halstead, Kent, the son of Harry Stoe and Louisa Caroline (Fowle) Man and baptized on 5 May at St. Margaret’s Church, Halstead, Kent. He died on 6 February 1911 in Hythe, Kent and his ashes were interred in St Margaret’s, Halstead. Septimus belongs to Man Generation Eight.

See also Hubert Man’s, Morrice Man’s, and E. Nesbit’s recollections of Septimus Man below. A page from The Jurist has been found on the Internet indicating that Septimus was called to the bar (Middle Temple) in June 1867.

These are Hubert Man’s recollections of his uncle Septimus Man:  Born at Halstead on April 8th, 1839. Sponsors, Major Walsh etc. He was educated at the Naval School. He went out to India in the telegraphs but obtained an Assistant Magistracy at Kumon [Kumaun / Kumaon]. He got bad sunstroke and came home, had brain fever, he was laid out for dead in the old fashioned way at Halstead, with a penny on each eye and a plate of salt on his chest. His coffin was in the house.

His brother Edward applied James’ Horse-blister Mixture behind his ears. The household retired to rest; at 3 a.m. Edward was woken up by someone leaping on to him and seizing his throat, it was Septimus, they fought, servants rushed in, finally the police were called and they were separated. Septimus never wholly recovered his reason. Amongst other escapades, he stole a leg of mutton and was pursued through Deptford, arrested and only bailed out by his cousin Lt- Col H. G. Man. He was put into an asylum but escaped and afterwards lived in rooms in different places on a weekly 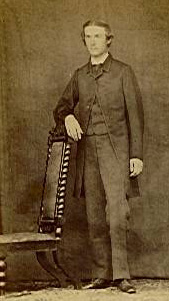 allowance from his family.  There were many stories of his eccentric doings. He walked about Paris in an Admiral’s uniform and subsequently told his brother Edward that he was charmed by the politeness and consideration shown him by the French. On one occasion his brother William went to visit him at his room in London and tried to persuade him to have a bath. Sep agreed with the proviso that Bill had one first. As soon as Bill was in the bath Sep threw his brother’s trousers out of the window and dashed out into the street. Uncle Bill always declared that in his anger he leapt from the bath and armed only with the sponge pursued Sep into the street.

Septimus was very musical and fond of children. I remember him well; he used to play the banjo for us and always asked whether we were fond of roly-poly pudding. His mother always said of him, that in his young days he was the cleverest and best of all her sons. He lived to be over 70.

These are Morrice Man’s recollections: Septimus Man, “Uncle Sep” was the “cleverest” of the family with alas! too sensitive a brain. He joined the Indian Civil Service and sunstroke and an unhappy love affair finally unsettled his mind. His brother, my father Edward Garnet Man being in India at the time, took what charge of him as best he could, and got him to England. Unfortunately Uncle Sep was not bad enough to be certified and he wandered about, occasionally visiting his relatives. When he first returned, Halstead Hall was temporarily vacant, all the old folk had passed away, and he with his turbaned Indian servant took up his eccentric life there for a while. The village folk, who believed in the “Ghost” at the Hall were at first terrified when at night they saw the gaunt figure of Uncle Sep pass the blindless windows with his brown servant carrying candles to his bedroom. He certainly was a trial to my father who used to try and induce him to lead a normal life. To us children on his periodic casual visits to our home (then at Walton on Thames) he was interesting, as he was fond of us. He liked us to visit him in the basement where he insisted on living, and listen to his queer talk and his still more queer attempts to play “Juanita” over and over again on his guitar. There must have been some attractive if tragic memories for him in that endless re-iteration of that tune. Looking back I realise how good father, still more mother, was to be so patient with him, for father, unlike uncle Bill, had a strong social instinct and gift. Uncle Sep was not exactly a social success in a house where five daughters and four sons gathered their friends around them. Fortunately Sep was very shy and did not appear when strangers (to him) were about.” 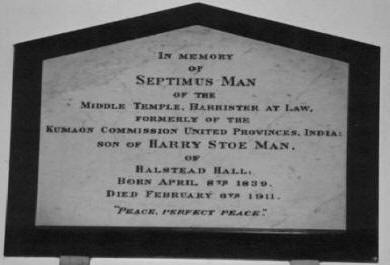 The Man family left ‘Halstead Hall’ toward the end of the nineteenth century. Louisa Caroline Man died in 1878 while living with her daughter Eleanor at Carshalton. Afterwards, the family rented the ‘Hall’ out to a number of families among them that of the author E. Nesbit.

In 1897 she published her childhood memories in the Girls Own Paper. One paragraph recalls the eccentricities of Septimus Man, who remained behind in the village after the family had left. Septimus had trained for and passed the bar and had practiced for a while as a barrister in India before becoming an ‘eccentric’ . Here is Nesbit’s recollection of him, though she had little clue as to who he was exactly:

It was an uneventful, peaceful, pleasant time. The only really exciting thing was the presence, within a stone’s throw of our house [the ‘Hall’], of our landlady’s son [Septimus Man] who lived all alone in a little cottage standing in the fields. He was reported mad by the world, eccentric by his friends, but as we found him, perfectly harmless. His one delusion, as far as I know, was that he was the rightful owner, nay more the rightful tenant of our house, and about once in six months he used to terrify the whole household by appearing with a carpet bag at the front door and announcing that he had come to take possession. This used to alarm all of us very much, because if a gentleman if eccentric enough to wish to ‘take possession’ of another person’s house there is no knowing what he may be eccentric enough to do next. But he was always persuaded to go away peaceably, and I don’t think we need to have been so frightened. Once while he was in the drawing-room being persuaded by my mother, I peeped into the carpet bag he had left in the hall. It contained three empty bottles that had held mixed pickles, a loaf of bread and a barrister’s wig and gown. Poor gentleman. I am afraid he was very eccentric indeed.

Upon her return to England, Mrs. Nesbit [Edith’s mother] found and consequently rented a new home for the family. Halstead Hall as it was (and still is) known, stands in the village of Halstead in Kent, located between Tonbridge and London. The surrounding countryside is fairly hilly with substantial woodland and sits atop the chalk of the North Downs. Edith described the house thus:

“The Hall, it was called, but the house itself did not lend itself to the pretensions of it’s name. A long, low, red-brick house, that  might have been commonplace but for the roses and ivy that clung to the front of it, and the rich heavy jasmine that covered the side. There was a smooth lawn with chestnut trees round it, and a big garden that ran round three sides of a pond with the fourth side accessible to the rest of the villagers. In the garden flowers and fruit and vegetables grew together, as they should, without jealousy or class-distinction. There never was such peonies as grew among our currant-bushes, nor such apricots as hung among the leaves on the sunny south wall. From a laburnum tree in the corner of the lawn we children slung an improvised hammock, and there I used to read and dream and watch the swaying green gold leaf and blossom”. This house was to be remembered by Edith as the favorite of all her childhood homes and she spent three very happy years there in a period of security and consolidation.

Although Edith’s childhood was virtually over, at the age of fourteen, there were still many pleasant interludes and adventures to be had, especially when Alfred and Harry came home for the holidays. The boys built a raft for the pond (“Which was but a dull thing when the boys were away at school”). They had also discovered a marvelous secret hiding place, which could only be reached by climbing up through a hatch in Edith’s bedroom ceiling into the roof space and then traversing a narrow passageway which runs all around the house between the ceiling and the eaves. They could eventually emerge by means of a narrow door, out on to the flat centre of the roof surrounded by four tiled ridges. “This until the higher powers discovered it, was a safer haven (for privacy) than even the shrubbery. Happy vanished days, when to be on the roof and to eat tinned pineapple in secret constituted happiness. 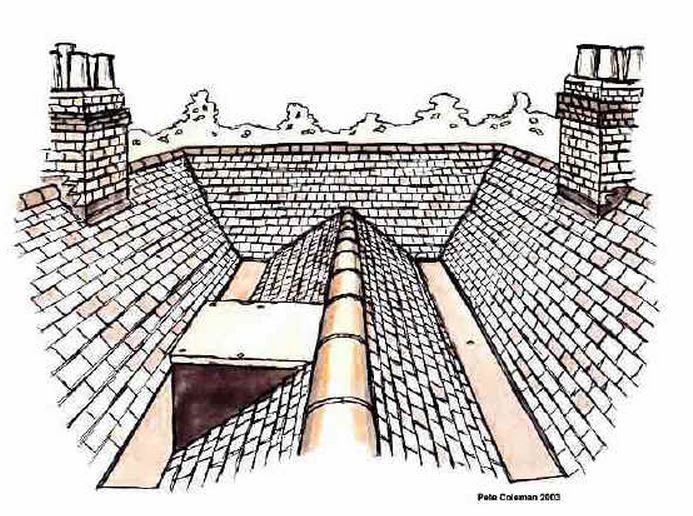 The Roof Top of Halstead Hall

There was one more diversion for Edith and her brothers, if they ran down the field at the back of the house, they would come to a railway line that ran in a deep cutting with a distant tunnel in either direction.

It was her memories of this line that came to play such an important part in her classic children’s novel “The Railway Children”. One can easily imagine Edith, Alfred and Harry walking along the railway sleepers to Chelsfield Station, perhaps playing “raging torrents” on the way, and to befriend the porters and Station Master when they got there. Chelsfield Station would have been about three miles walk for the children, the more local Knockholt Station was not opened until a year after the Nesbits had moved back to London. During her time at Halstead, Edith had started to concentrate on her poetry, her south-facing upstairs room had an old bookcase and bureau drawer that could form a desk for her to write at. Edith kept the drawer locked, to be brother-proof. “I don’t know whether it was the influence of the poetry I read, or merely a tendency natural to my age, but from fourteen to seventeen all my poems were about love and the grave. I had no sweetheart in real life , but in my poems I buried dozens of them and wept on their graves quite broken-heartedly”. Edith plucked up enough courage to show her Mother some of her work and her Mother was impressed enough to pass this on to a Mr. Japp, a contributor to the Sunday Magazine and Edith later had pleasure in recording the following: “The first poem I ever had published was a non-committal set of verses about dawn, with a moral tag. It was printed in the Sunday Magazine. When I got the proof I ran round the garden shouting ‘Hooray!’ at the top of my voice, to the scandal of the village and the vexation of my family.”  Edith enjoyed her time very much at Halstead Hall, she spent her early youth there (14 to 17 yrs of age), but all too soon this  “perfect existence” was to come to a sudden end. It is not known whether it was a general shortage of funds or that, quite simply, the lease had come to an end on the Hall, but either way Edith’s days at Halstead were numbered. Sarah and Edith Nesbit packed their belongings and moved to Islington in London…