Eleanor Katherine Ellen Man was born on 21 December 1870 and was baptized on 15 January 1871 at Oorai, West Bengal, India, the daughter of George Octavius and Mary (Bradford) Man. She married Charles Fettes Blacklaw on 25 August 1894 in Bengal. 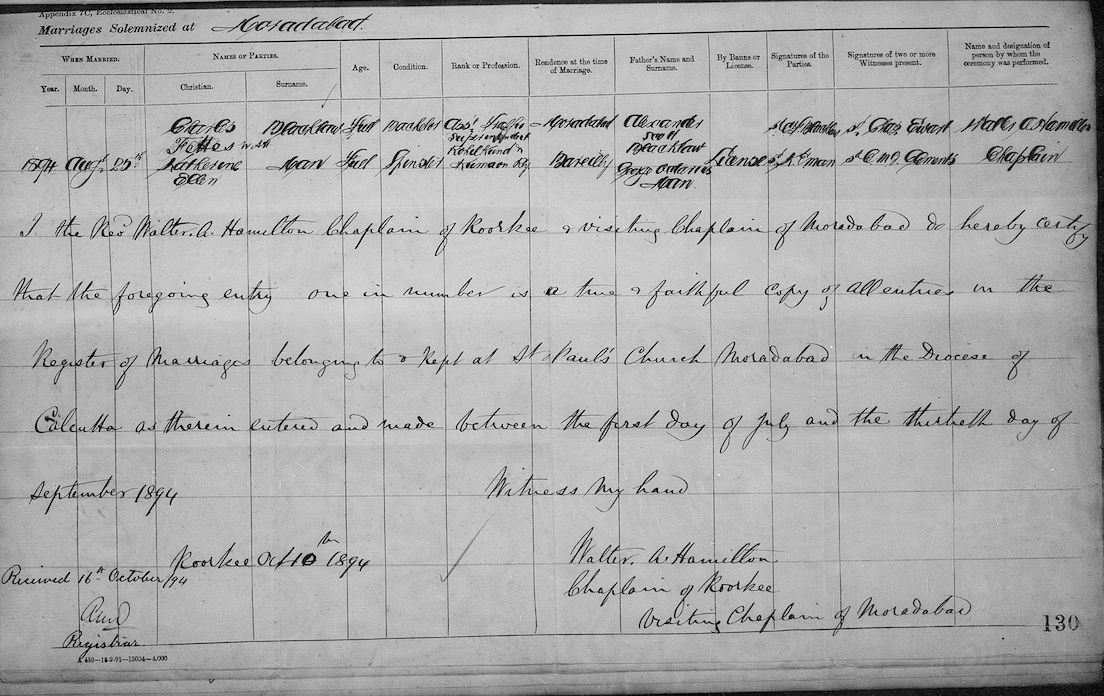 From the above marriage record we gather that Charles was an assistant supervisor of the Rohilkhand and Kumaon Railway and that his father was Alexander Scott Blacklaw.

They had a daughter Ethel Charlotte who was born on 23 September 1895 in Bareil, India. From Charles’s probate record we gather that Ethel Charlotte must have married a man called Cecil Morrish Rice. However, so far, nothing else is known of this Rice marriage.

Charles died on 30 March 1949 at a house named ‘Taiping’ located on Range Road, in Hythe, Kent; his probate record is below:

Eleanor died on 2 November 1957 at Bryony Cottage near Newbury in Berkshire; her probate record is below:

He was born in 1899 at Dulwich, Surrey, the son of John Norman Rice and Minnie Morrish. According to the 1911 census John was a butcher / ‘Meat Salesman’.

According to the Imperial War Museum Cecil enlisted in 1917 with the RAF as a Clerk.

Both Ethel Charlotte and Cecil Morrish appear on the Electoral Role on the Top Floor of 194 Peckham Rye (Road?) in Dulwich No. 16 Ward in 192?

According to the Imperial War Museum Cecil enlisted in 1917 with the RAF as a Clerk.

Cecil appears to have convinced a Mrs Johnson to part with five pounds which he never returned. He was arrested and his case was reported in the Surrey Mirror on 26 January 1945.