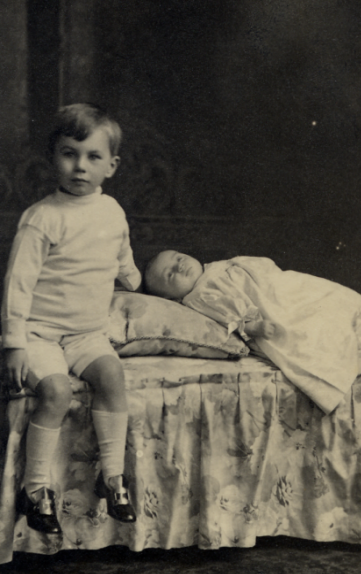 Andrew Man and his brother Peter

Andrew Morrice Man was born on 22 February 1907, at Claygate, Surrey, the eldest son of Morrice and Dora (Lucas) Man.  He was baptised on 21 April 1907  at St. George, (later Christchurch) at Esher in Surrey.

He married Marion Ursula Walmsley on 10 August, 1935 at Colchester, Essex. 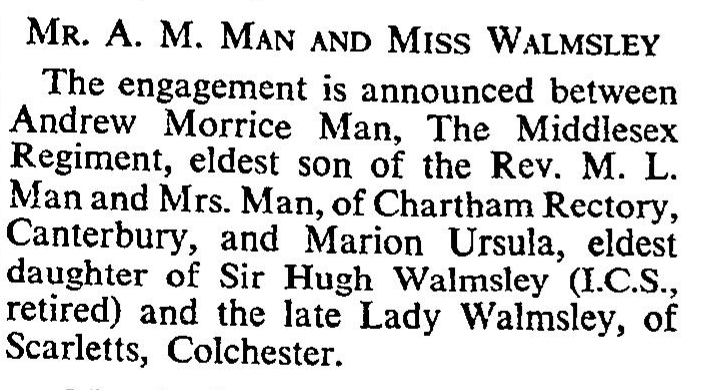 Below a postcard written by Andrew to his parents telling them that he was top of his class, dated 1914. 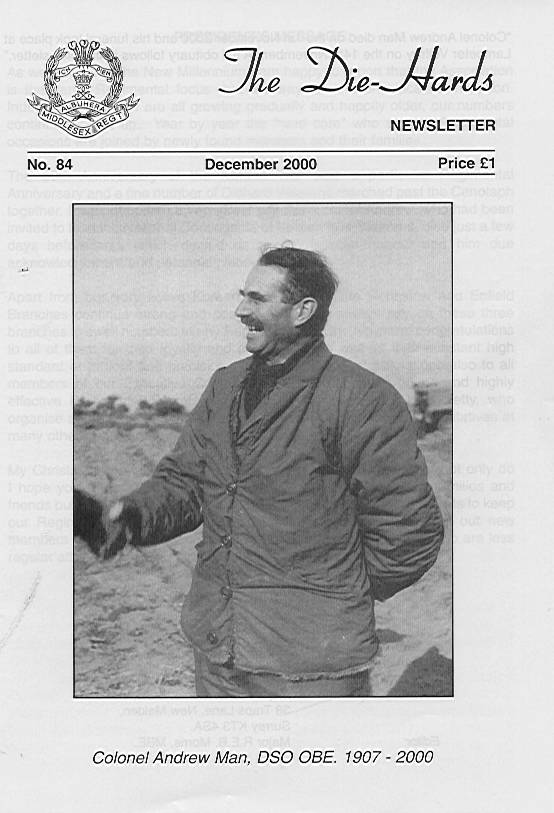 The following obituary appeared in The Die-Hards, the regimental magazine. He led the Middlesex Regiment in the Korean War.

Colonel Andrew died on 1st November 2000, aged 93, in hospital, after a fall in his home the day before, and was cremated on 14th November, following a family service at Lampeter Velfrey Church attended by a large number of local friends as well as comrades in his beloved Regiment and the Korean Association, both locally and from his Regiment, together with Normandy Veterans’ and the Royal British Legion. A Regimental Memorial Service will be held in London, and details will be published later.

He was born on 22nd February 1907 at Claygate in Surrey, where his father, the Reverend Morrice Man had his living, and was the eldest of five children. He was always encouraged to work hard at school in order to win a scholarship to Emmanuel College Cambridge, where his father had studied. A scholarship was necessary as money was exceedingly tight at the time and his father often assured the family that “The Lord would provide” – but as Andrew liked to point out, this was not much help in the short term.

Andrew won a scholarship to Dover College in 1921 eventually becoming Head of the Sixth Form. Having been unsuccessful in winning a scholarship to Oxford or Cambridge it soon became crystal clear to him that on leaving school in 1926 aged 19 yrs old he would have to fend for himself with immediate effect. So with his father he visited the War Office and enlisted as an Other Rank in The Buffs in August 1926 with the aim of selection for RMA Sandhurst as a `Y’ cadet, whose expenses would be paid by the Army.

After service as an acting unpaid lance-corporal in 2 BUFFS he achieved this ambition and went to the RMA as a `Y’ cadet, rising to be a Senior Under-Officer, Captain of Hockey and 2nd in the Order of Merit. He was then commissioned, on 30th January 1930, into The Middlesex Regiment (DCO), proud that apart from the gift of a ’40 BSA Deluxe motorcycle, he had not cost his family a penny!

On 10th August 1935, Andrew married Ursula Walmsley in Colchester, and he liked to recall how the Regimental Band played “Little Man You’ve had a Busy Day”. It was a particularly happy marriage that lasted until Ursula’s death in October 1996. They had two children, Catherine and Nicholas.

Colonel Andrew’s long, distinguished and happy time as a Diehard until he finally retired on 7th December 1959 began with service with the 1st Battalion at Catterick in 1930, then with the 2nd Battalion from 1931 – 1939 in Khartoum, Colchester and Gosport, and later in Kent with the 8th Battalion in 1943. Uniquely, he commanded Middlesex Battalions twice – 1/7th Battalion in the campaign in NW Europe and later the 1st Battalion in the Korean War. His contribution to and involvement in the Regiment is unique, and from the day he joined it was his first priority. Indeed, in August 1943 he asked to be relieved of his staff appointment and to revert to his substantive rank of Major in order to return to Regimental Duty. His Brigadier called his request “professional suicide”, but Andrew was not deterred and was able to join the 8th Battalion at Margate, then part of 43rd Division.

A year later he was in command of the 1/7th Battalion, which provided the MMG and 4.2 Mortar fire support for the 51st Highland Division. He boarded one of the 22 Liberty ships waiting in the Thames for the Battalion’s turn to cross to Normandy. Passing Southend Pier he remarked wryly that the old man fishing off the end of the pier “was certainly in a better place than we were”. On D+2 the Battalion landed on Juno Beach, and fought its way through France, Belgium and Holland. During this campaign Colonel Andrew was awarded the French Croix de Guerre.

The war in Europe over by 1949 he was again in command, this time of the 1st Middlesex in Hong Kong. He was an able, determined and experienced battalion commander and he inspired confidence in all ranks from the time of its sudden and unexpected despatch from Hong Kong to Pusan in Korea in August 1950, and during its commitment to the unusual and frequently hazardous operations (sometimes even bizarre) in arduous climatic conditions. At one stage in the operations he commanded the 27th Commonwealth Brigade during the absence on sick leave of the Brigade Commander, Brigadier Aubrey Coad.

The award of the Distinguished Service Order to Colonel Andrew for his command of the Battalion in Korea was well earned. On receiving the award he immediately made it clear that he accepted it on behalf of All Ranks in the 1st Battalion and that he would wear it on their behalf. He was also awarded the US Legion of Merit.

Colonel Andrew’s staff appointments were varied. They included instructing at the School of Signals, service on the Brigade and British Forces Staffs in Palestine and Cairo, the Operations staff at the War Office and in 15th Scottish Division, where he was awarded the OBE in February 1945, and the divisional staff of 2nd Division in BAOR as well as Command of the School of Administration in BAOR. Later he was Colonel A/Q at Catterick District, and his last staff appointment was as Army Representative on the NAAFI Board in London. He retired from the Army on 7th December 1959.

After retirement he worked as Distribution Manager for Charringtons for six years, was Vice President of the Protection for Rural Wales for eight years, a member of the National Trust Council, an active Friend of St Paul’s, President of the Cardiff and West Wales Branches of the Korean Veterans’ and the Normandy Veterans’ Associations.

After his Army service Colonel Andrew continued to be an active supporter of all Regimental activities despite living so far away in Wales. He was President of the Regimental Association and Officers’ Club and of the our own Korean Veterans, and attended their meetings right up to a short while before his death. Even at the recent Regimental Association AGM members looked to him for advice. At Reunions and the Annual Service in our Chapel in St Paul’s he made special efforts to get around and chat to his former soldiers and the respect and devotion they held him in was very obvious.

It is particularly sad that he died only a few days before he was to lead the National Contingent of the Korean Veterans’ Association at the Cenotaph Remembrance Day Ceremony, something that he had steadfastly set his heart on, and to which the Regiment’s Korean Veterans had been particularly looking forward to – with the National Contingent led by their own Korean War Commanding Officer.

There are few Diehards who have not had the pleasure and the benefit of help and advice from this enthusiastic, sprightly, cheerful, ever alert and robustly fit leader. He was always honest in his opinions, upright in his bearing, courteous yet deliciously direct in all his dealings with other people. His advice and even the occasional necessary criticism was invariably both correct and appreciated. He was a fine letter-writer with a straightforward clear vocabulary and style, and whenever one telephoned him (and he was always so obviously delighted to hear from former comrades and old friends) he sounded his usual irrepressible self, ready to help anybody in any way he could.

As a Regiment, and for so many of us who took him as our military role model, the debt we owe him is incalculable. He served the Regiment for so long, so assiduously and in so many ways for over 70 years. Years dedicated to the many comrades with whom he soldiered in both peace and war. He will long be remembered, loved, admired and respected by everybody in his Regiment and by many others outside it – and understandably so.