Michael Leland Crosthwait was born on 20 August 1916, the son of children of Katherine Rosa Man and Leland George Crosthwait.  He married Natalie Marie Leonard on 10 September 1949 at St James’s, Spanish Place, London.  Michael died on 8 November 1996.  Natalie was born on 5 October 1922 in San Antonio, Texas, USA. They had three children. 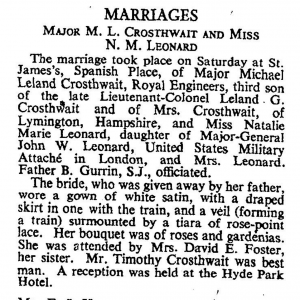 Michael Leland Crosthwait was born in India where his father was in Indian Survey. Educated at Wellington College, he was head of school and, after being commissioned into the Corps from the Shop in 1936, went up to St John’s College, Cambridge to read mechanical sciences. After Cambridge he attended the usual courses at Chatham. Of that time MHC recalls: “Mike stood out from a batch that was highly individualistic and, probably, wilder than most, because he was not of that mould but straight, sincere, sensible and uncomplicated.”

At the beginning of the war Crosthwait was appointed Adjutant of 1 Chemical Warfare Group and, after a spell as an instructor at the RSME at Ripon went to the Allied Force HQ in Algiers as SO2 RE. MHC, who shared a cabin with him on the voyage out, remembers Mike Crosthwait’s authoritative and rather clipped, though not hard, manner of speech used when explaining to the third officer appointed to share their cabin that as he was a captain and they were majors, he would have to sleep on the floor. There was no argument on the matter. Later he commanded 621 Field Squadron in 7th Armoured Division, taking part in the Salerno landings in Italy in September 1943.

On their return to the UK in preparation for the invasion, Crosthwait was posted to the Staff College as an instructor but was back in more active service a few months after the invasion, in 13 Army Group RE. This group was the one allocated to First Canadian Army and was therefore both under command of and commanding Canadians. It was Mike Crosthwait’s ability to speak with authoritative diplomacy that contributed much to the successful working of the group in their massive task all the way from the Normandy bridgehead to Nijmegen. Later, the Rhine crossings took place and for his professionalism and expertise in those he was appointed MBE.

Later he commanded 553 Field Company in 43rd Division. The end of the war found him involved with the clearance of a number of sea mines on roads approaching Hamburg and Bremen. A wartime colleague writes ” … many people will bear witness to Mike’s reputation in the Corps. I can only say that it was a privilege to serve under him and learn from his professional skills. Beyond that, his calmness, kindness and good humour were an example to us all.” After the war, he served in Egypt and Palestine first as Second-in-Command RE and then as Brigade Major 7th Infantry Brigade in 3rd Division.

Crosthwait returned to England in 1947 as SO2 RE HQ EinC at the War Office and then had two years in Germany first as a DCRE and later as Second-in-Command of 38 Corps Engineer Regiment. After attending the JSSC he went to America in 1953 as an exchange officer with the United States Army Corps of Engineers. Returning in 1955, he joined the Middle East team on the Joint Planning Staff at the Cabinet Office, where no doubt Suez among other crises kept him busy, until being selected to command 1 Training Regiment at Malvern.

From 1959 to 1961 he was AA and QMG East .Anglia District and in 1962 went to Germany to command 11 Engineer Group at Hameln. In 1965 he returned to England for two tours at the War Office, first as DDPS and lastly as DEinC.

After his retirement from the Army in 1970, Michael Crosthwait was appointed Bursar of Darwin College. RMH writes: “These were early days for Darwin and the current reputation of the college for friendliness and administrative efficiency owes much to his efforts. He was liked and re-pected by staff as well as by the fellows and students.”

After retirement as bursar in 1981, he became president of the Society for Visiting Scholars of the university. He was also closely connected with Great St Mary’s as the secretary of the Property Committee for over twenty years and as a frequent lesson reader. However he continued to maintain a close interest in Corps affairs. Already a contributor to the Journal (he won the Cooper’s Hill prize for an article in 1947), he continued to write up to the 1980s, the “Early Days” series, annual extracts and comments from the issues of 100 years earlier. He was vice president of the Institution from 1970 to 1975.

Michael Crosthwait married in 1949, Natalie Leonard, and is survived by her and their two sons and daughter.
PJMP RMH MHC

On the evening of March 23rd, Marshal Montgomery gave the signal to operation Plunder, the crossing of the Rhine near Wesel and Rees. A set-piece attack, with prior aerial and artillery bombings. In flat-bottom landing crafts and amphibious vehicles, four British and US divisions, together with a commando brigade crossed the 500 metres to the river’s opposite bank. The 9th Canadian Infantry Brigade took part in the operation, crossing the river north of Rees and later capturing Millingen.

The British and Canadian troops which fought in the Rhineland suffered tremendous losses from the German artillery. This is why Montgomery decided that it should be silenced by a large-scale airborne operation, codenamed Varsity. While the infantry was crossing the Rhine, 1,589 aircraft flew over the area in successive waves. In full daylight and despite intense counter-attacks, the parachute battalions were dropped behind the German lines and got to work as soon as they touched the ground. Some 1,337 gliders then landed in the drop zone with vehicles and equipment for the airborne troops. The 1st Canadian Parachute Battalion was involved in that operation and landed in a wooded area along the Wesel-Emmerich road. It was immediately met with heavy machine-gun and sniper fire; this did not halt the Canadian paratroopers who reached and cleaned up their targets.

At the end of the afternoon, land and airborne troops made their junction and solidified the bridgehead on the Rhine’s east bank. The Battle was over and the Allies had succeeded in crossing one of the last natural defences of the German Reich. A speedy end to the war now became a definite possibility.

The Wellington College Roll of Honour

Major ANTHONY EDWARD LELAND CROSTHWAIT,M.B.E.,Royal Engineers,Picton 1925 to 1930, passed high into Woolwich, won the M.B.E. and was mentioned in dispatches for the work he did in oil demolitions in Persia (1941-42). From the MiddleEast he went to the Staff College at Quetta; then he returned to Britain and finally went over to Western Europe with the B.L.A. At the crossing of the Rhine by the SecondArmy in March, 1945, hecollll11anded the 91st Field Company, R.E. and it was while direct–ing the building of a bridge across the river that he was hit in the head by a shell splinter.As he was still conscious it was hard to persuade him to let himself be taken into hospital.He was longill,but he seemed to be likely to recover. These hopes were disappointed. Over two years after (12th April, 1947) he died from the wound received while crossing the Rhine.