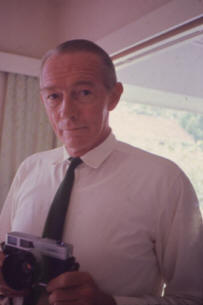 He married Sheila Allwynne Cran Reis on 25 October 1947, at the church of St John the Divine, Ipoh, Malaya.

Allwynne Reis was born on 29 October 1922, in Georgetown, Penang, Malaya the daughter of Gordon Reis and Winifred Cran, and died on 30 July 2001 at Chatterwood Nursing Home, Petersfield, Hampshire.

NOTES: Frank Man was educated at Wooton Court, Cheltenham, and Queens College, Oxford. His description of the fall of Singapore and subsequent escape through Sumatra to Australia and from there home to England can be read HERE.(<— PDF).

He was awarded the VRD, DSC, and OBE for his naval service during and after the war. The DSC was awarded for his: “… bravery and undaunted devotion to duty in important and hazardous minelaying operations. Operation HOSTILE – NW coast of Europe.” Frank’s work was important in ensuring the D-Day invasion fleet was able to land troops on the beaches of Normandy.

The funeral address delivered by Bill Beavis can be read below:

One would only have to look round this chapel to realise how much Frank meant to us all and how much he will be missed by Allwynne, David, John, the rest of his family and all his many friends.

On such a sad occasion, it is so difficult to find the right words, especially for Frank, who was such a reticent and modest man with a strong dislike for anything bordering on praise.

Allwynne has asked me to say a few words, so I must risk his disapproval.

Frank and I have been friends for about fifty years, during which time we have been together in many diverse circumstances.

In Malaya where he was a well liked young enthusiast on his first overseas contract, participating in all the usual activities.

Then later during the war years in the Malayan RNVR. The fall of Singapore when we were lucky enough to have him join our ship after his own was lost.  Without his support and quiet efficient unflappability, we might well have joined the ranks of the many who failed to get through. 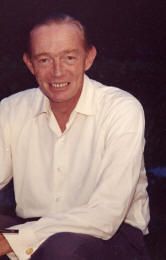 The courage, humour, and fortitude which he showed then in the face of the difficulties and dangers of that journey across Sumatra to Java and ultimately to Australia, was repeated later in UK when he was awarded the DSC for his staunch work in the channel.

He continued his success story after the war in Malaya where as a family man, he had to overcome all the difficulties of rebuilding, complicated by the Communist war, while at the same time playing a large part in the expansion of the Malayan Navy, reaching high rank and obtaining a well earned OBE for his services.

Then home to a Directorship and later retirement.

Frank embodied so many of the Kipling standards and which to-day are so often ignored or belittled — modesty, loyalty, unselfishness, kindness — – – and that sense of humour and the twinkle in his eye.  In fact he was a gentle man in the true meaning of both words.

Finally in retirement and his seventies, or ” injury time’ as we called it, we sometimes talked about the end of the road — and if it is any consolation to know, he has gone as he wanted to go — quickly and with the minimum of fuss and bother.

Which is fine for Frank but much too sudden and much much too soon for Allwynne and the rest of us and our sympathy and support must surely go out to his family.

While wishing Frank a calm sea, a following breeze, a safe haven and on behalf of all his Malayan friends salamat jalan.

Frank Man probably arrived at Cheltenham in September of 1922. He is said to have arrived a few days late with his arm in a plaster cast carrying a violin case. He spoke very little of his school days, but a record has been made of those times in the form of a biography of the Australian writer T. H. White.

Southwood House, Cheltenham circa 1924 Frank Man is standing in the row immediately behind those seated, second from right. Seated just in front of Frank Man, second from right is P. H. White. Bishop, the housemaster, sits in the middle.

This biography ‘Patrick White: A life’ written by David Marr and published in 1991gives an insight into at least some of what Frank and Morgan Man must have experienced. Since it is based on White’s life and not the Man brothers’, it contains aspects of what it was like to be at Cheltenham in the 1920’s that were relevant to White’s perspective. I have therefore kept the references to ‘suppressed sexuality’ since for White, being gay, this must have been a more salient aspect of life in Southwood House than for the Man brothers who were not. Here is Marr pages 79-73.

Cheltenham had been a fashionable spa since the daughters of George III came to take its waters for their constipation. In the late eighteenth century a town of ‘melancholy elegance’ grew up around the springs at the foot of the Cotswold Hills, and in Queen Victoria’s time Cheltenham became a favourite residence of retired officials whose health had been ruined in the colonial service. When White arrived in the 1920’s invalids were still pulled about the streets in wicker bathchairs built like rickshaws, bands played in the Montpellier gardens, and common folk were kept from the Promenade. Beside elaborate pump rooms, Cheltenham had theatres, a race track that came alive once a year and a handful of schools. Cheltenham College, standing like a toy Gothic monastery on the edge of the town, was neither old nor very distinguished. This was not Eton or Marlborough, but a school set squarely in the second rank. Cheltenham fed half its young men into the British army, and for ninety years it had aimed to turn out good chaps who believed in honesty and fair play, ‘the sort of qualities that typified the Indian Civil Service’. Old Cheltonian dinners were held allover the Empire: in Shanghai, Cairo, Singapore and in the year of White’s arrival at the school a particularly ‘good show’ was held in Simla. 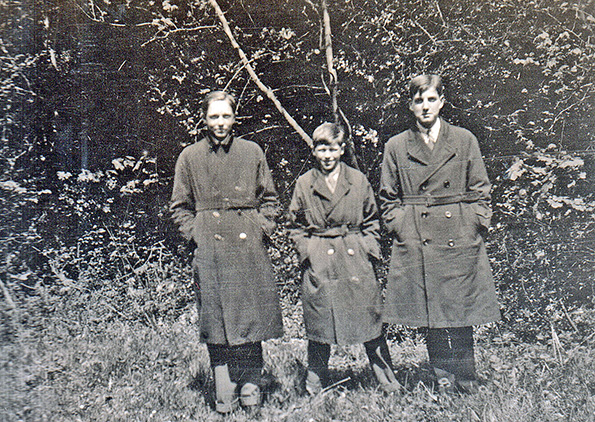 Southwood House was a Regency villa in a handsome street half a mile from the college. Here White lived in the care of the house master Arthur Bishop, a tall man with a long, sleepy face and eyebrows that met like a roof over his hooded eyes. Bishop was dangerous, unknowable and in the grip of a malign obsession to stamp out filth in Southwood.

The fate of each boy at Cheltenham depended, more than anything, on the state of his house and since the scandal of 1924 life at Southwood had been wretched. ‘Everything appeared to be going well, ‘records the prefects’ log for that year, ‘when it was discovered that immorality and indecency had been going on almost continuously. .. the result was that three fellows were expelled, one left and one was asked to leave at the end of the term.’ In White’s first term the rumours were that half the house had been expelled, and that one of the victims had ended up in the chorus of No, No Nanette. 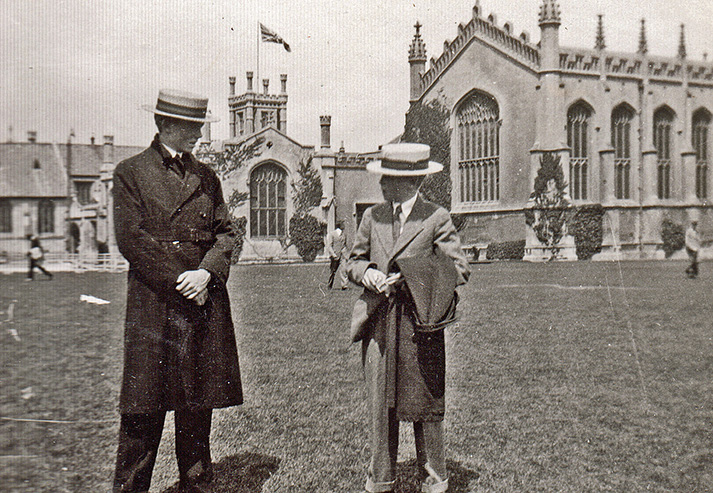 All friendships were now suspect. Bishop burst through doors expecting, and failing, to find boys in flagrante. He seemed to assume that every child was a liar, an idler, a potential drunkard, a bugger and a thief. His beatings were cruel even by the standards of English public schools. The verdict of a retired Major-General who suffered under him as a boy was that Bishop was ‘an absolute sadist’. Lewisites wondered if the housemaster won his medals in the war for flogging German prisoners. They believed he came to the toshroom each night to check the pattern of welts on their backsides. To thwart their housemaster they turned to face him under the showers. Southwood reeked of sex, fear and self-disgust. In a sense Bishop’s campaign worked: he made sure that White had a bleak and fearful adolescence. The sensuality which had had free rein in the boy (P. H. White) was now thwarted, and he was cut off from the physical affection that might have comforted him in England … 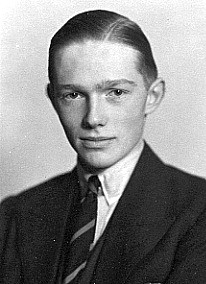 Southwood was a long walk from the College, and Lewisites spent much of their day going up and back to the school. After house filth -a breakfast of an egg or a scrap of bacon, bread and margarine with jam -the sixty boys processed through the streets of Cheltenham walking in twos and threes. In winter they wore mortar boards and in summer boaters. Prefects on bicycles worked as outriders to keep stragglers in check, and Bishop rode beside the line on a machine built for his enormous frame. He was nearly seven feet tall. The procession ended at the chapel, an imposing piece of Victorian gothic. Prayers came first and lessons followed. Late in the morning a man sold penny buns from a tray in the yard that ran through the classroom block. When the temperature fell near to freezing, the boys were sent on a compulsory run before going back to the unheated classrooms. 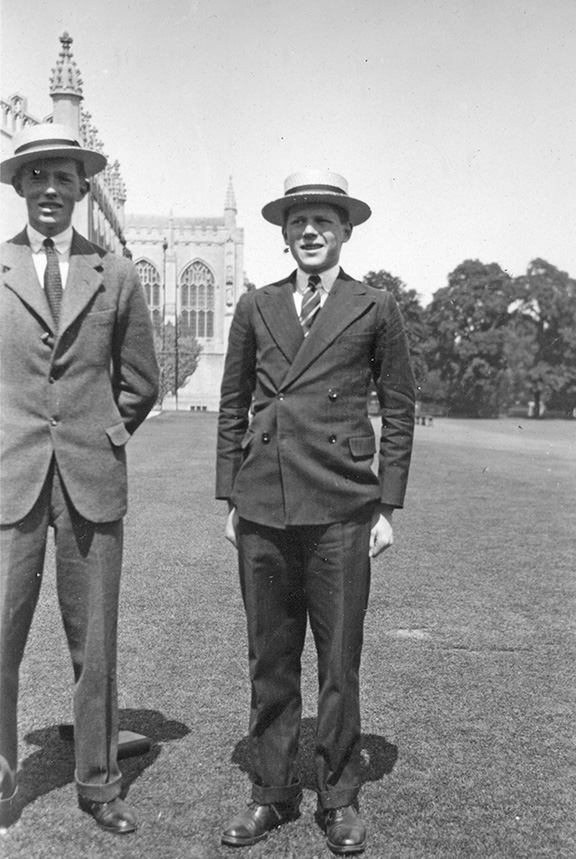 Lewisites returned to Southwood for a lunch of meat and pudding. Most afternoons were spent at drill or sport. Both were compulsory. If snow and frost made the ground unplayable, the boys were sent for long runs over Leckhampton. White fought to keep up with the leaders. The day ended at Southwood with a light meal that left everyone hungry. Bishop fed them out of his own pocket and he was not generous, but they had hampers of their own food and could buy supplies from the tuckshop. Jam was rationed to two pounds a week per boy.

Upstairs in their shacks, the prefects’ gramophones ground away at ‘Frankie and Johnnie’, ‘Heavenly Father send thy Blessing’, ‘Drifting and Dreaming’. Downstairs forty junior boys did their homework in the sweatroom. White seemed to shudder trying to shut out the noise and unrest around him. They were supervised by their house driver Clement Priestley, a mixture of clown and scholar, an enthusiastic sportsman known as the Jaw because of his bull chin. This strange but likeable man took some of the sting out of being in Bishop’s house. Later he became the teacher of White’s schooldays.

On Monday nights once a fortnight every boy had to show Bishop his satis, and a sense of dread hung over Southwood from early morning. In other houses little attention was paid to this ritual, but Bishop made each boy account for himself. Ifhis work was satisfac- tory , Bishop dismissed him. He never praised. If it was unsatisfactory a beating followed automatically: six strokes of the cane, and a seventh if you straightened up too soon. He began with a thin cane to sting and changed to a thick one to rub it in. One night he smashed a light globe as he swung, and the boy had to sweep it up before the beating continued. White was rarely caned but confessed he didn’t mind too much when it happened.

One of his friends at Southwood, Ragnar Christophersen, later carried out an informal investigation into the fate of those Lewisites who passed through Bishop’s hands. It revealed Southwood had ‘more officers cashiered from the army, people who ended up on the wrong side of the law, solicitors who had embezzled money, and one chap who ended up in Salisbury lunatic asylum, than all the other houses at Cheltenham, and all ascribed to the rather sinister influence of our housemaster’

Footnote: White endured four miserable year at Cheltenham, and wrote that ”when the gates of my expensive prison closed I lost confidence in my mother and never forgave.”