Eleanor Ida Man was born on 14 October 1910 in Hamburg, Germany, the daughter of Harry Morgan Stoe Man and Nora Loeck.  She married John Alexander Lloyd on 20 September 1933 in Dorking, Surrey.

Eleanor died on 15 December 2004 at Bushey, Hertfordshire and was buried on 5 January 2005 at St. Giles, Ashtead, Surrey.  John Lloyd was born on 5 June 1908 at Bletchworth, Surrey, and died on 29 December 1989. They were divorced sometime after 1940. Eleanor and John belong to Generation Seven; their children belong to Generation Eight. One is living, the other deceased:

Below the funeral address delivered on 5 January 2005 at St. Giles church, Ashtead, Surrey: 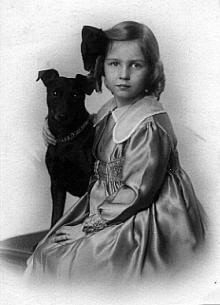 ‘My mother was German and my father was English’ as she would often remind us.

Eleanor was born in Hamburg, but at the age of only ten weeks she travelled by train and ship to Shanghai in China, where her father was manager of the Chartered Bank. Two younger brothers were born there, and we have many excellent photographs of their family life there, with Chinese servants and many European friends. She could recall in some detail a return journey to Hamburg on the ‘Trans- Siberian Express’.

She later attended a girls’ school in Germany and formed lasting friendships with her classmates. For over fifty years she continued to travel to Germany to meet some of them at their annual ‘Klassentag’ or reunion.

Returning to England in 1925 she went to Wentworth Hall, a girls’ school on Box Hill and again made lifelong friends. In 1933 she married the brother of a schoolfriend, John Lloyd. Their marriage was brief, but resulted in the birth of her two daughters, Janet and Renee.

Her father died in 1936 and, during the war, Eleanor and her two daughters lived with her German mother in Epsom. Having many German friends and relations herself, she was acutely aware of strong anti-German feelings, even among some of her own family.

Her life was concentrated on bringing up her two daughters, but she was also particularly close to her two young nephews, who were at boarding school in England while their parents were abroad. As one of 31 first cousins (on her father’s side alone) she loved family life, keeping in close touch with all of them, including those on her mother’s side in Germany. She formed a bridge between the two nations in her family.

Like her father, she was for many years a keen tennis player, and became Ladies Captain of the ‘Paddock Club’, Ashtead.

She devoted over 45 years to serving with the St John’s Ambulance, teaching young people about first aid and home nursing, and reached the rank of a Serving Sister. The flag of the Epsom branch is today flying at half-mast in recognition of her dedication to this cause.

We are fortunate in having many beautiful examples of her skill at embroidery, not merely ‘painting by numbers’ but creative works of art with remarkable detail and precision. She was able to continue working with needle and thread until a few weeks before her death.

She was a devout Christian and worshipped regularly at this church as long as she was physically able. Her charitable work included regular collecting for the ‘Mission to Seamen’ and voluntary work for Oxfam.

With us today are her children, grandchildren and great-grandchildren, together with nephews, nieces, cousins and friends from far and wide. 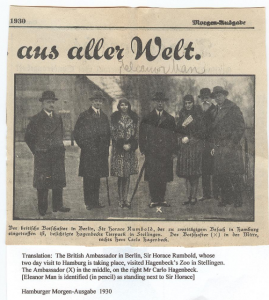