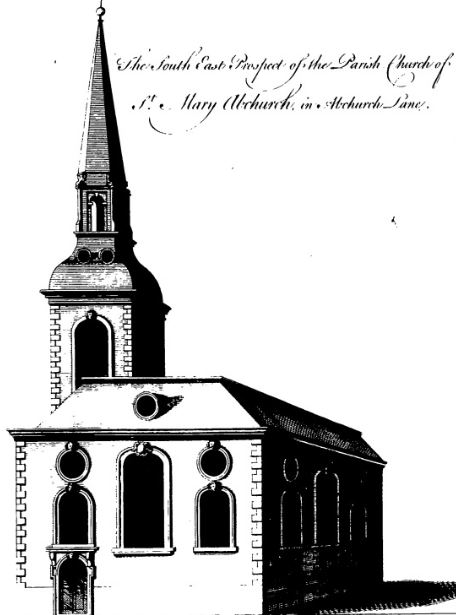 The Barnes family appears here on the Man family web site as a result of the marriage in about 1658 between Henry Barnes and Susannah Craddock. Their daughter, Susannah Barnes (1663-1737) married on 10 November 1691 at St Mary Abchurch, Canon Street, London, John Balchen and it is their granddaughter Mary Balchen who on 26 February 1746 married John Man.

Susannah Cradock/Craddock was not Henry Barnes’s first wife. In about 1653 Henry married Hester Bave, the daughter of Doctor Samuel Bave and Hester Robinson of Bath, Somerset.

However Hester died on 6 April 1659 and twelve days later was buried at Bath Abbey. When Henry married Susannah Craddock they named one of their children Hester. The Barnes family was originally from London (Hornsey) but Henry followed Samuel Bave’s footsteps by setting himself up as a doctor just outside Bath.

The Hornsey parish register has a marriage of Henry Barnes in 1658 to Susannah Smith. In the opinion of this family historian this is more than likely to be the marriage between ‘our’ Henry and Susannah but why Smith and why before Hester (Bave) Barnes’s death?

Samuel Bave was very successful at what he did as the house he built for himself testifies (below). However his relations with his son-in-law appear to have been strained given the lengthy legal proceedings he launched into against Henry Barnes, his wife Hester, and Henry’s brother Symon.

The burial record of Dr. Henry Barnes on May 17 1701 at All Saints, Weston, Somerset is below: 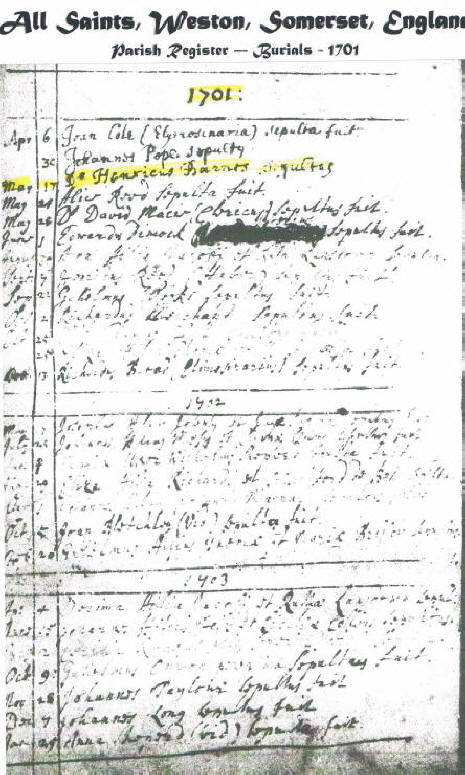 In Easter Term, 1658. Samuel Bave, M.D., exhibited a bill of complaint against Henry Barnes, Hester his wife, and Simon Barnes [his brother] declaring that by indenture, dated 20 Sept. 1653, between the defendant Henry of the first part, the complainant of the second part, and the defendant Simon of the third part. In consideration of a marriage to be had between the defendant Henry and Hester daughter of the complainant, etc. Decree dated 1 Feb. 1658. (James I. to Charles II., Division 2, Part 1, Part 525, No. 7.) This settlement is in the process of being transcribed.

The will of Henry Barnes can be read HERE  This Henry Barnes was the father of  the Henry who married Susannah Craddock and the son of Jane (Hill) Barnes whose will appears below. Note that all these persons are the direct ancestors of the Man family. There was a legal dispute among Henry, Symon, and the other Barnes siblings details of which can be found here.

In the nam[e] of God, Amen.  I, Jane Barnes of the parish of St
Olaves, Silvre [Silver] Street, London, Widow, being in perfect mynd and
Menory [memory], but noat in body, thanks be to allmighty God and doe ordayne this[?] my Last Will and Testament in manner & forme following. Item, I hombly bequeth my Soule in to the Hands of almighty God, my Creator, beecheeching him for Jesus Christ my redeemer [interlineation not decipherable] for body  to be decently buried  if it shall please God at the will and discretion of my executor, Becheeching mye lord God to rayse them up to yorself to lyve                                               with my Lord and my only Saviour Jesus Christ in his eternall
Kingdone [kingdom] for ever Amen. And as for my worlde goods {which if it please God to grant}.        It[e]m , I give and
bequeth unto my daughter-in-lawe, Elizabeth Barnes, x6 [6 sh]. Item, I give and bequeth unto my Grandchild, Symon Barnes, two hundred pounds
when he shall accomplish the age of xxiiij [24] yeares. It[e]m, I give
and bequeth to my Grandchild, Henry Barnes, the
some [sum] of one hundred pounds of Lawful monies of England when he
shall accomplesh the age of twenty foure years. Item, I give
& bequeth unto my three Grandchildren, Elizabeth, Martha,
& Mary Barnes  the some [sum] of fifty pounds apeece when each shall
acomplesh the agge of one and Twenty  yeares. Item, I give
and bequeath unto my Brother-in-Lawe, Leonard Dolandane[?]
the some [sum] of five pounds within three months after my Decease.
I[t]em, I make & ordayne my Loving Sonne Henry Barnes
my Sole executor of this my Last Will and Testament, of all
my goods and Estate and doe hope he will pirforme this my
Desir & Will. It[e]m, I give unto Doroby and Anna my Sonnes mayde x5 [15 sh] appeece.
In wittnes hereof I have hereunto sett my hand & Seal the
Day and Yere first above written. Item, I give to Mary Grindefer [?]
widow, x6 [16 sh].  Item, I give to goodwiffe [mistress of household] Easten x6 [16 sh].

Wittness to this my will

Ann Makes [?]
the marke of J B  Jane Barnes  Widow 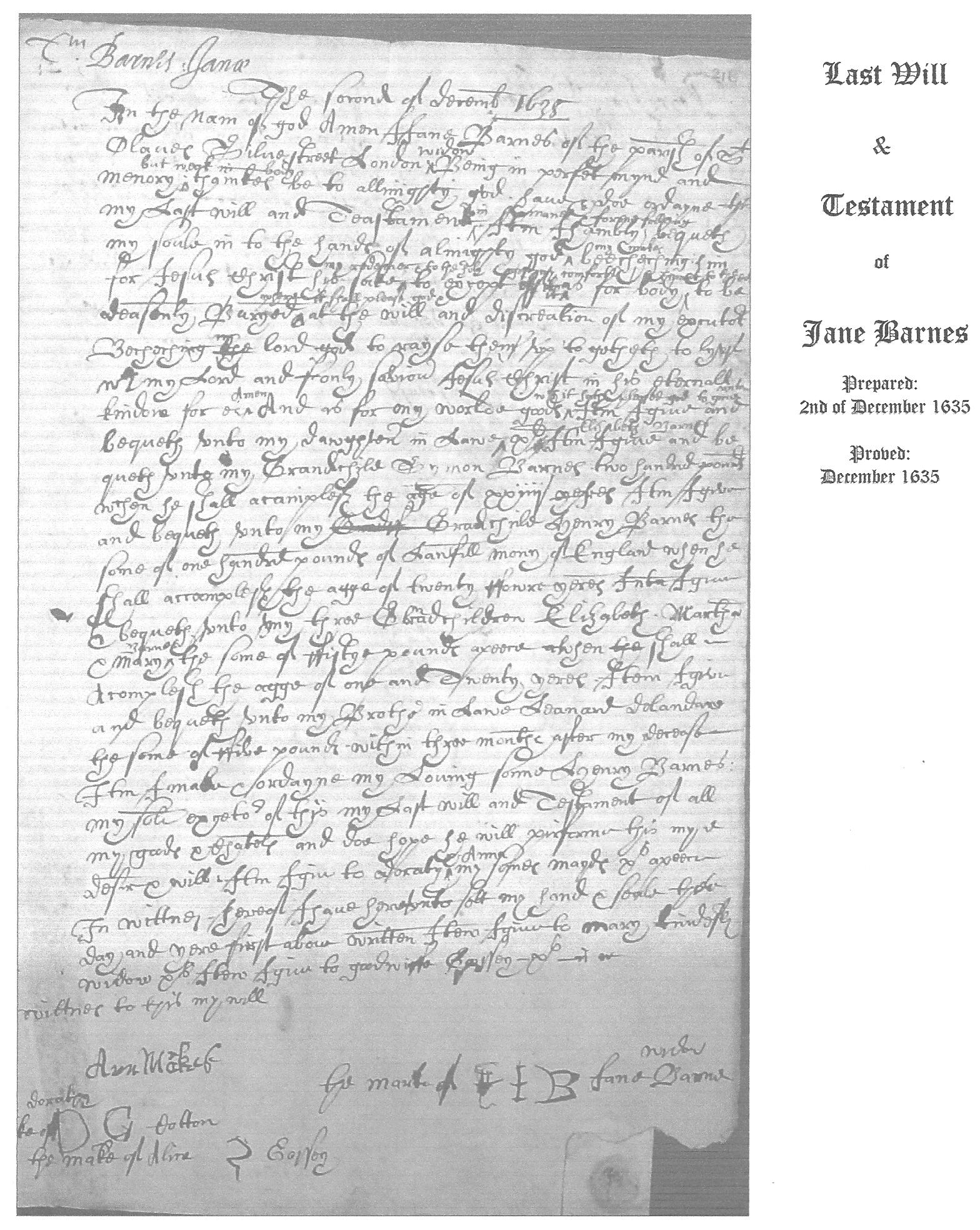